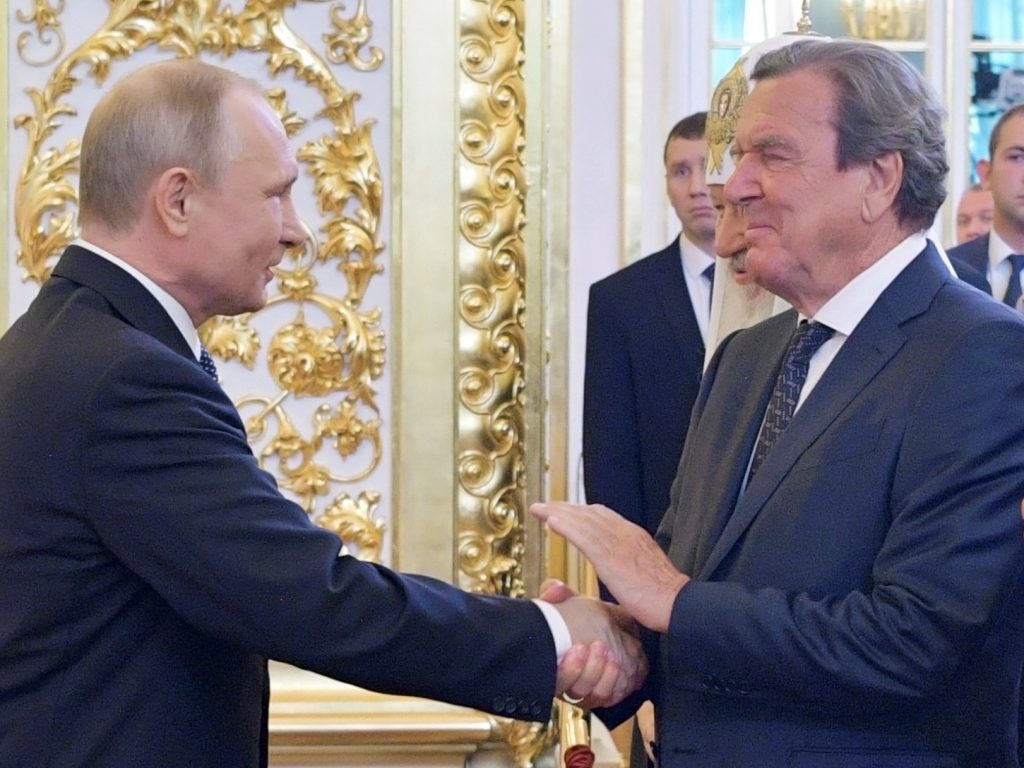 For decades, German foreign policy toward the Soviet Union, and then the Russian Federation, has been based on the Ostpolitik concept of “Wandel durch Handel” or “Change through Trade.”

Reinvigorated in the early 2000s by the then German Chancellor Gerhard Schroeder, this concept states that by increasing trade relations with authoritarian regimes like Putin’s Russia, Western regulatory norms and rule of law would naturally flow upstream, slowly transforming kleptocracies into liberal democratic states.

More than 15 years after Schroeder left office, there has been a lot of “Handel” without much Kremlin “Wandel” to show for it.

Over the past decade, Moscow has illegally annexed territory in Ukraine and Georgia, launched cyber attacks and disinformation campaigns, and assassinated an array of opponents at home and abroad. And all of this has happened while Putin continues to find support in various corners of Europe for energy mega-deals including the Nord Stream 2 and TurkStream gas pipelines.

As the Biden administration begins to carry out its much-needed policy of revitalizing the US-European relationship and transatlantic security after the Trump era, it should follow the road map so effectively laid out in a 2018 Foreign Affairs article coauthored by President Biden himself and Penn Biden Center Managing Director Michael Carpenter. In their analysis, Biden and Carpenter argued that “the United States must lead its democratic allies and partners in increasing their resilience, expanding their capabilities to defend against Russian subversion, and root out the Kremlin’s networks of malign influence.”

President Biden is now making positive steps to repair the damage done by President Trump to, especially, the US-German relationship. He should also take this opportunity to work with Berlin (as well as Vienna) to push back on the Kremlin’s cornerstone malign influence strategy: co-opting former senior European officials to push for Putin policies while working directly for Russian state-owned enterprises.

In Washington DC, it is common to hear people complaining about the revolving door between government and business, but these practices cannot be compared to the lows demonstrated by some German and Austrian political leaders.

The Kremlin recruitment trend began in earnest just after German Chancellor Gerhard Schroeder lost his re-election bid in 2005. Before he resigned, Schroeder permitted the construction of the Nord Stream 1 pipeline. Immediately afterwards, Putin made him chairman of the shareholders committee of Nord Stream AG, a company fully owned by Russia’s Gazprom but based in Switzerland.

Schroeder has persistently propagated Putin’s cause in Europe and has called for sanctions relief on Russia despite a glaring lack of behavioral changes by the Kremlin. Schroeder’s closest assistant for many years was Frank-Walter Steinmeier, who has been President of Germany since 2017, and has demonstrated similar levels of enthusiasm for Nord Stream 2 as his former long-time boss. Last month, Steinmeier made controversial statements that suggested Berlin needed to complete Nord Stream 2 due to historic guilt over the Nazi regime’s invasion of the Soviet Union during World War II. His comments drew sharp criticism, especially in Poland and Ukraine, which both suffered proportionally far greater losses than Russia during WWII.

Steinmeier’s successor as German Foreign Minister, Sigmar Gabriel, also faced controversy from Germany’s European Union neighbors while serving as Minister of Economy and Energy, when, following a meeting with Putin in October 2015, the Kremlin quoted Gabriel as saying: “Mr. Miller and Mr. Matthias Warnig will continue to pursue the Nord Stream 2 project. This is in our interests; but it is not just in Germany’s interests–it is a very interesting project even beyond Germany’s borders. What’s most important as far as legal issues are concerned is that we strive to ensure that all this remains under the competence of the German authorities, if possible. So if we can do this, then opportunities for external meddling will be limited. And we are in a good negotiating position on this matter.” With Gabriel’s alleged remarks coming just weeks after the announcement of Nord Stream 2 in mid-2015, any question of the project being “just a commercial deal” free from political support by Berlin was resoundingly answered.

Putin was so happy with Schroeder that he made him Chairman of the Board of Directors of Rosneft in 2017 with an official annual salary of USD 600,000. His bonuses and salary at Nord Stream do not appear to be public, since Nord Stream AG is a private company (though owned by Kremlin-controlled Gazprom).

Serving on the supervisory board of a state-owned foreign company is not wrong in its own right, but the problem is that Russia is an authoritarian kleptocracy. As has been amply demonstrated, Putin and his friends have tapped these state-owned companies for billions of dollars every year since about 2006.

Tellingly, Schroeder’s closest German colleague in these companies is Matthias Warnig, a close Putin confident and ex-Stasi officer who was named in Russian opposition leader Alexei Navalny’s recent widely circulated anti-corruption video as a key figure in Putin’s orbit of corruption. He has been a leading manager of Nord Stream and is now the CEO of Nord Stream 2, while also holding positions on the supervisory boards of Rosneft and sanctioned Russian state bank VTB.

While Schroeder’s Kremlin ties have made headlines, perhaps the most startling infiltration by the Russian state has taken place in Austria. Indeed, when it comes to Vienna, becoming a lobbyist for the Russian government seems to be a standard retirement plan for some senior Austrian politicians.

The social democratic Austrian Chancellor Alfred Gusenbauer (2007-8), appears to have lobbied Washington on behalf of the pro-Kremlin Ukrainian President Viktor Yanukovych. He serves on the board of the Dialogue of Civilizations Institute, which is often criticized as a Kremlin front organization and is led by the retired Russian KGB general Vladimir Yakunin, who is under US sanctions.

One of Gusenbauer’s social democratic successors, Christian Kern, was Austrian chancellor in 2016-17, which apparently qualified him for a stint on the supervisory board of Russian Railways, though he is no longer there. Notably, Kern penned a strong letter coauthored by then German Foreign Minister Sigmar Gabriel decrying the Countering America’s Adversaries through Sanctions Act (CAATSA), US legislation aimed at stopping the Kremlin-backed Nord Stream 2 project.

To serve Russian state interests is apparently not only a privilege reserved for Austrian social democrats. One of the most telling conservative examples of this trend is Hans Joerg Schelling. He was Austrian Minister of Finance until December 2017. Three months after leaving his post, he signed an advisory contract with the Nord Stream 2 gas pipeline. OMV is also involved in the project, of which he was the owner’s representative as Austrian Minister of Finance. In 2019, he was nominated to serve on the supervisory board of OMV, but that was perhaps too much of a revolving door for the Austrians, so he was not admitted. But apparently Schelling thought he could work for both Gazprom and OMV.

One of the most ridiculous examples of an Austrian politician seeking dubious Russian financing was when Heinz-Christian Strache, Austrian vice-chancellor and leader of the country’s right wing populist Freedom Party, was filmed in Ibiza, Spain, in 2017, offering government contracts to individuals posing as representatives of a Russian oligarch in return for political support. Those belated revelations forced Austria’s current chancellor, Sebastian Kurz, to end his coalition with the Freedom Party in 2019.

The Freedom Party has offered an even more tragicomic example. In August 2018, Austrian Foreign Minister Karin Kneissl, who had been nominated by the party, got married. Putin himself was the star guest of the wedding. He duly arrived with a Cossack choir and notoriously danced with the bride. A short two years later, Kneissl began appearing as a commentator for the Russian propaganda television network RT, including writing on Nord Stream 2 for the outlet. And last week, Kneissl apparently “waltzed her way” to being advanced as a nominee for a place on the supervisory board of Rosneft.

In his new national security strategy, US President Joe Biden has declared: “We will require transparency and accountability in our government, root out corruption, and confront the distorting role of money in our politics.”

A good foreign policy start toward this vital goal should be to stop Nord Stream 2, either by working with Germany in the next few weeks to implement an immediate moratorium on construction, or else by implementing further Congressionally mandated sanctions toward stopping the largest symbol of Kremlin strategic corruption and elite capture in Europe. Given the time pressure created by Russian vessels currently advancing pipeline construction, the stop needs to happen in weeks, not months.

Once work on the pipeline is brought to a halt, a dialogue should be opened to forge a new set of transatlantic political norms aimed at blunting the ability of former Western officials to work for Kremlin-controlled state-owned enterprises. For example, if former officials continue to receive taxpayer-subsidized pensions, nations across the transatlantic community should consider legislation to suspend these payments while former officials serve as employees of Kremlin-controlled state-owned enterprises. This would be a step toward reducing perceptions of strategic corruption and elite capture common to the policy debates around many Russian state-backed projects.

By using its significant position of goodwill following the Trump era, the Biden administration can help build transatlantic unity on methods to fight perceptions of public corruption, and thereby increase the security of the entire transatlantic community while strengthening, especially, US-German and US-Austrian relations. After a decade-plus of failed “Wandel durch Handel” realpolitik toward Moscow, this can’t happen soon enough.

Anders Åslund is a Senior Fellow at the Atlantic Council. His latest book is “Russia’s Crony Capitalism: The Path from Market Economy to Kleptocracy.”

Dr. Benjamin L. Schmitt is a Postdoctoral Research Fellow at Harvard University, Senior Fellow at the Center for European Policy Analysis, and a Fellow of the Duke University Center for International and Global Studies “Rethinking Diplomacy” Program.