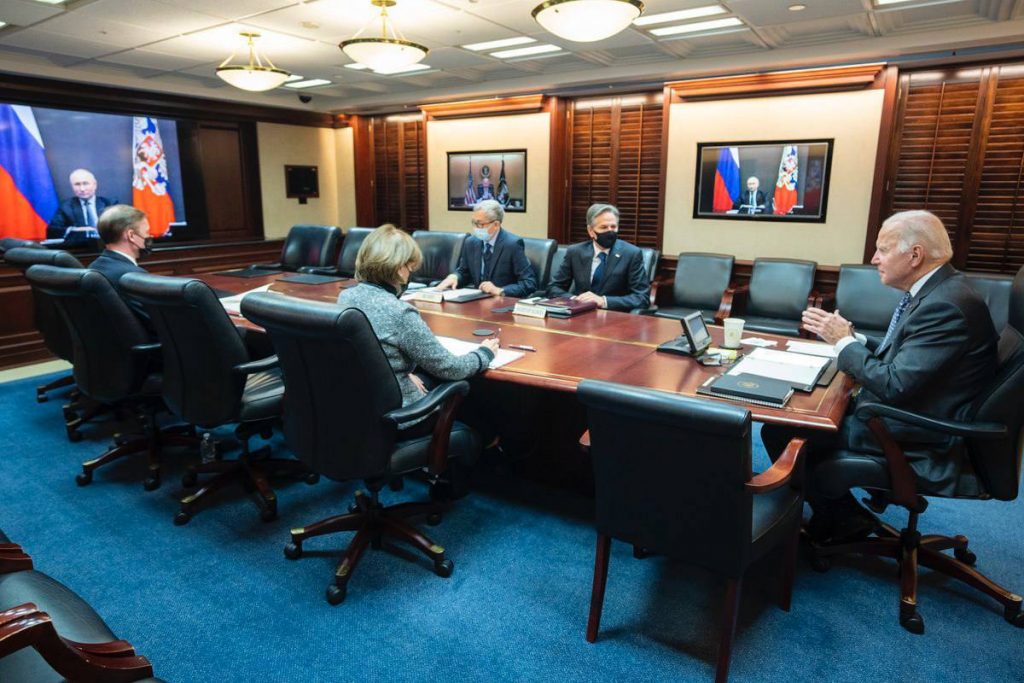 US President Joe Biden has informed Russian President Vladimir Putin that the US and its European allies will respond with “strong economic and other measures” if the Kremlin proceeds with a threatened escalation in its seven-year war against Ukraine. The warning comes amid mounting international concern over a large Russian military build-up along the country’s shared border with Ukraine that has been accompanied by increasingly bellicose rhetoric from the Kremlin.

Speaking after a December 7 video call between the two presidents, US national security adviser Jake Sullivan confirmed Biden had told Putin that America was preparing a range of tough new sanctions measures “at a deep level of specificity” together with its European partners. “I will look you in the eye and tell you, as President Biden looked Putin in the eye and told him today, that things we did not do in 2014 we are prepared to do now,” Sullivan told reporters in Washington.

Biden’s comments echo earlier statements by US officials as the United States attempts to deter Putin from launching a full-scale offensive against Ukraine. Speaking at a summit of NATO foreign ministers in Latvia on December 1, US Secretary of State Antony Blinken said America would respond to a fresh Russian invasion of Ukraine with a range of “high impact” economic measures.

In addition to robust new economic sanctions, Biden advised Putin that the American reaction to any escalation in Russia’s war against Ukraine would include strengthening the capabilities of NATO allies in the region and providing the Ukrainian military with more defensive materials. The US President also laid out an alternative route of deescalation and diplomacy, with the United States ready to engage Russia in a broad discussion of strategic concerns.

Moscow’s coverage of the two-hour talks acknowledged Biden’s emphasis on sanctions measures but played down the significance of the current Russian military build-up and sought to blame NATO for growing geopolitical tensions. According to the official Kremlin readout following the call, “Putin stressed that responsibility should not be shifted onto the shoulders of Russia, since it is NATO that is making dangerous attempts to take over Ukrainian territory and is building up its military potential at Russia’s borders.”

Biden’s reiteration of US support for Ukraine and his talk of imposing high costs on the Kremlin will be welcomed in Kyiv, where many feel that demonstrations of Western resolve can still act as a powerful deterrent as Putin weighs up a full-scale Russian invasion.

In an apparent show of Western unity hours before the Biden-Putin call, European Commission President Ursula von der Leyen stated that the European Union “continues to fully support Ukraine in the face of Russian aggression. We will respond to any further aggression by scaling-up and expanding existing sanctions. We are ready to take additional restrictive measures in coordination with our partners.”

Not everyone will be satisfied with the tone of Tuesday’s call between the American and Russian leaders. Indeed, there is considerable concern within the transatlantic community that Biden’s latest warnings to Putin do not reflect the gravity of the situation and could be interpreted by the Kremlin as a green light to escalate hostilities in Ukraine.

Critics note that the various sanctions measures imposed by the US and its European partners since the onset of Russian military aggression against Ukraine in 2014 have failed to produce any discernible change in Moscow’s behavior. On the contrary, the Kremlin continues to strengthen its grip over Ukraine’s Crimean peninsula and parts of the industrial Donbas region in eastern Ukraine currently under its control.

Over the past two-and-a-half years, Moscow has begun the mass distribution of Russian passports to residents of Occupied East Ukraine, transforming the region into a passport protectorate and creating obvious barriers to any future reintegration with Ukraine. During a bout of Russian saber-rattling on the Ukrainian border in spring 2021, President Putin’s deputy chief of staff Dmitry Kozak underlined the significance of this passport imperialism when he warned that Russia “would be forced to come to the defense” of eastern Ukraine’s newly created population of Russian citizens if fighting escalated.

Meanwhile, Putin himself has made clear that he regards the return of Ukraine to the Russian sphere of influence as an historic mission. In a remarkable 5,000-word essay entitled “On The Historical Unity of Russians and Ukrainians” published in July 2021, the Russian ruler compared Ukrainian national identity to a weapon of mass destruction and openly questioned the legitimacy of Ukrainian statehood before declaring, “I am confident that true sovereignty of Ukraine is possible only in partnership with Russia.”

Putin’s increasingly open obsession with Ukraine and his readiness to menace Kyiv with the threat of overwhelming military force have led to calls for a far more comprehensive Western approach to resolving the ongoing Russo-Ukrainian conflict. While the prospect of painful new economic sanctions could prove sufficient to prevent an imminent invasion in early 2022, Russian imperial ambitions in Ukraine will remain a source of international instability until the issue is decisively addressed by Western leaders. Biden’s December 7 video call with Putin may represent a step away from the abyss of a major European war, but it will not bring much-needed peace and predictability to the region.