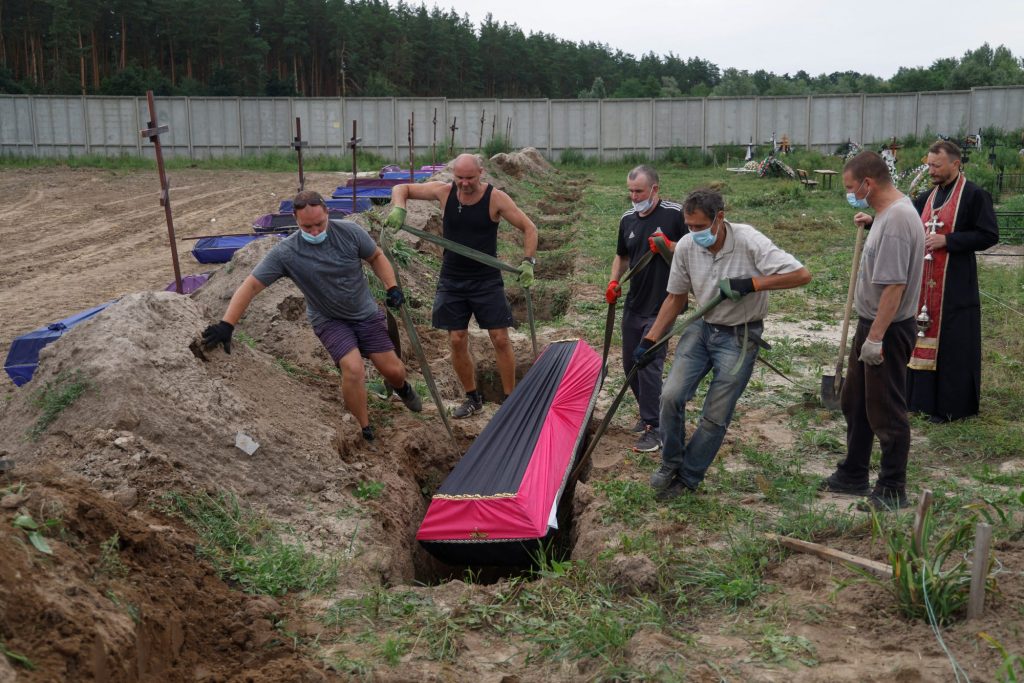 The Amnesty report, which accuses the Ukrainian military of basing its troops too close to civilian infrastructure, has been widely condemned by Ukrainian officials and many others in the international community including war crimes experts. Meanwhile, the Kremlin has warmly welcomed Amnesty’s claims, with Russian officials actively promoting the report to justify Moscow’s ongoing bombing campaign in Ukraine.

Pokalchuk took to Facebook on August 4 to disavow the report, explaining that Amnesty’s global branch had effectively sidelined the Amnesty Ukraine team and proceeded with publication without their input or consent. She resigned the following day, writing, “Although unwillingly, the organization created material that sounds like support for Russian narratives. Seeking to protect civilians, the study has instead become a tool of Russian propaganda.”

Under international humanitarian law, armies have a responsibility not to use civilian infrastructure such as operational schools and hospitals or densely populated areas for military operations that could draw enemy fire. Ukraine is no exception. However, the Amnesty report makes some glaring omissions. Although it notes that Ukraine’s tactics in no way justify Russian attacks, it doesn’t address Russia’s demonstrated strategy of targeting civilian objects of no military value. Moreover, it ignores evidence that Ukraine has made a concerted effort to evacuate civilians from areas of intense fighting.

Although such practices are explicitly prohibited under international law, Russia has repeatedly attacked civilian infrastructure with impunity, frequently shelling residential areas at night and pedestrian spaces during the day. Even clearly marked buildings such as an International Red Cross warehouse and the Mariupol Drama Theater, which sheltered around 1,000 civilians and was identified with the word “children,” were reduced to rubble by Russian strikes.

Attacks on Ukrainian healthcare have been so frequent and targeted that they appear part of a deliberate campaign rather than an unfortunate pattern. Since Russia’s full-scale invasion of Ukraine began in February, the World Health Organization has documented 433 attacks on Ukrainian healthcare facilities. Despite all this, Amnesty International has chosen to focus its attention on 19 towns in which Ukrainian soldiers allegedly based their operations too close to civilian infrastructure.

Some of the expectations expressed in the Amnesty report, such as the notion that Ukrainian troops should defend civilians from Russian attack without stationing themselves nearby, are nothing short of absurd. But despite resounding criticism, Amnesty International has defended its claims. Its Secretary-General, Agnès Callamard, dismissed all objections to the report, tweeting, “Ukrainian and Russian social media mobs and trolls: they are all at it today attacking Amnesty investigations. This is called war propaganda, disinformation, misinformation. This won’t dent our impartiality and won’t change the facts.”

Callamard’s comment mischaracterizes the nature of the criticism her organization has received. Among the “mob” of critics are such prominent figures as Ukrainian President Volodymyr Zelenskyy, who rejected the idea that blame for civilian deaths lies with the victim rather than the aggressor. “There cannot even hypothetically be any condition under which a Russian strike against Ukraine becomes justified,” he said in a speech shared on Telegram.

Numerous international officials have joined Zelenskyy in his criticism of the Amnesty report. “After 163 days of an unprovoked war the Kremlin started, it should be absolutely clear that Ukrainians are in danger due to Russia’s aggression, the brutality of its forces, and their relentless barrage on cities across the country,” tweeted US Ambassador to Ukraine Bridget Brink. The Estonian Ministry of Foreign Affairs and Latvian Minister of Foreign Affairs were also among those to voice their criticism. Meanwhile, British newspaper The Times branded Amnesty International “Putin’s propagandists.”

As for Russian trolls, Callamard should probably check again. Far from opposing the report, they are delighted. Russian propaganda has repeatedly tried to blame the Ukrainian armed forces for attacks on civilians perpetrated by Russians, and has often attempted to justify attacks on civilian infrastructure by falsely claiming that civilian targets were military objectives. For example, after Russia purposely bombed a functioning maternity hospital in Mariupol in March, Russian propagandists attempted to justify the attack by saying the hospital was controlled by the Ukrainian military.

The Amnesty report has not only played into these dangerous narratives. Crucially, it has given the Kremlin carte blanche to continue its strategy of targeting Ukraine’s healthcare and civilian infrastructure.

Russian diplomats have already tweeted a post that uses the Amnesty report to legitimize the bombing of Ukrainian hospitals, schools and other civilian targets. “When a civilian building is used for military purposes, it turns into a legitimate target for a precision strike,” the post reads. “Ukraine continues to do it, but now even Amnesty can’t handle it. Whenever MSM shows you photos of a destroyed Ukrainian school or hospital, always ask: Who was inside?”

This Russian Embassy tweet is not the only evidence that Moscow is exploiting the Amnesty report for propaganda purposes. Amnesty International’s Moscow office was forcibly closed by the Russian authorities in April 2022. Its website is blocked in Russia and Russians are not typically able to access Amnesty content. However, Meduza reported that the recent Amnesty report had become a trending news story on the Yandex News aggregator, which does not index independent media, suggesting that the Russian authorities are deliberately spreading the story to discredit Ukraine and justify violence towards the civilian population.

It appears that Pokalchuk’s worst fears have come true. Amnesty’s report, however well-intentioned, has likely empowered Russia to continue its attacks on Ukrainian civilians. This tragic outcome could have been avoided if Amnesty International had shown faith in its Ukrainian colleagues and entrusted such reports to those with knowledge of the region.

Lillian Posner is a Research Associate at the Council on Foreign Relations. She earned her master’s degree in Eurasian, Russian, and East European Studies from Georgetown University.

Efforts to reduce Russia’s cultural footprint in Ukraine have sparked criticism but in reality it is Putin who has weaponized Russian culture and forced Ukrainians to view the likes of Pushkin and Dostoevsky as tools of empire.