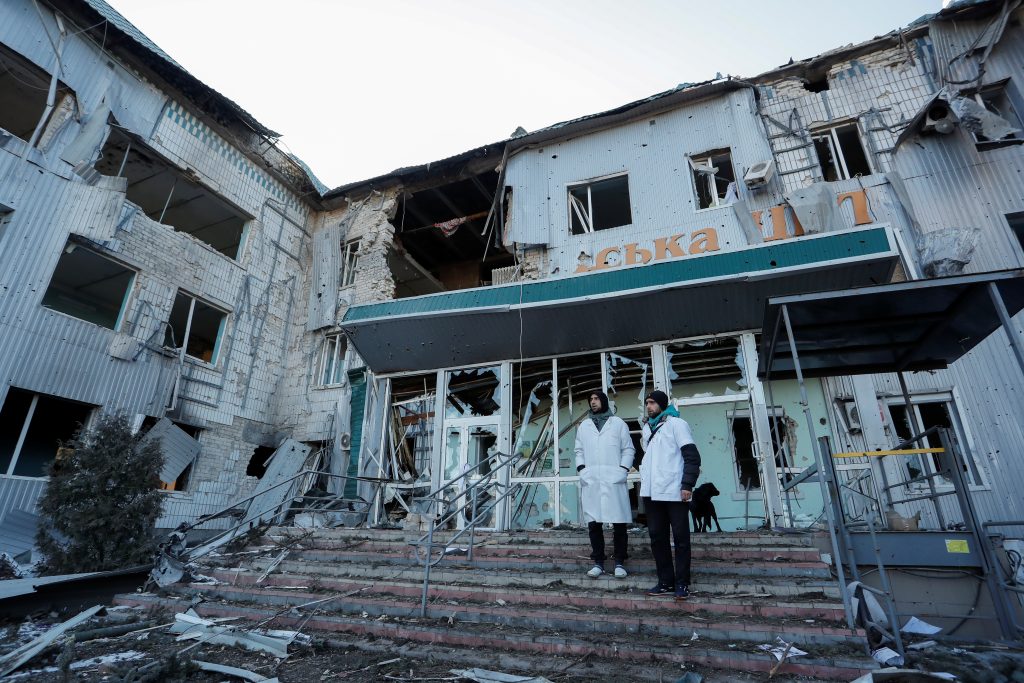 Just a few years ago, Pavlo Kovtonyuk’s goal was to rebuild Ukraine’s health system. Now, his task is to chronicle its systematic destruction by the Russian forces who are invading Ukraine.

While serving as Ukraine’s Deputy Health Minister until 2019, Kovtonyuk was part of a team of reformers on a mission to reform the country’s healthcare system and modernize its long-neglected medical infrastructure. This included funding and building new primary and family healthcare clinics.

One such new clinic was located in Makariv, a small town some 40 kilometers to the west of Kyiv. The clinic, which entered service in 2018, was clean and friendly with modern equipment. Before the war, it served as a hub for COVID-19 immunization efforts in the town.

A banner promoting the vaccination drive still hangs at the site, but this banner is all that remains of the facility. The rest of the clinic is now a heap of brick and concrete rubble along with fragments of glass and plastic, chunks of timber, and the wreckage of equipment. Heavy mortars flattened the clinic in March as part of the Russian army’s failed offensive toward Kyiv.

The destruction of a modern healthcare clinic in Makariv is no isolated incident. Kovtonyuk notes that a total of at least 169 Ukrainian medical facilities have sustained significant damage since the Russian invasion began in February, while 18 healthcare personnel have been killed.

Kovtonyuk says the attack in Makariv is part of a deliberate campaign. Through the work of his team at the Ukrainian Healthcare Center NGO, Kovtonyuk believes he has sufficient evidence to demonstrate that the Makariv clinic and multiple other medical facilities were targeted intentionally as part of Russia’s genocidal campaign to destroy the Ukrainian state and nation.

“It could be argued that the destruction of medical facilities is just part of the general Russian policy of attacking Ukrainian civilians and civilian infrastructure. Those are war crimes under the Geneva Convention. But this is more than that. It is the unprecedented weaponization of healthcare destruction by the Russian Federation,” Kovtonyuk says during a recent visit to the Makariv site.

To back up these claims, he notes that the clinic is located close to a larger hospital campus. While the clinic was completely destroyed by the advancing Russian army, there is limited damage to other structures. Similarly, buildings throughout the surrounding area are relatively unscathed. Nor are there any conceivable military targets nearby.

The targeted nature of the clinic attack has convinced Kovtonyuk that it was an intentional act rather than random destruction. A former World Health Organisation (WHO) senior manager, he is a man who is precise and conservative in his allegations and his investigations. Indeed, he is compiling hard evidence for a possible future case at the International Court of Justice.

Kovtonyuk believes the evidence gathered in Makariv and dozens of similar sites indicates a systematic Russian plan to destroy Ukraine’s medical infrastructure. “The Russians are destroying healthcare here to terrorize citizens and to force a genocide by migration,” he states. “They think they can get away with it. They believe the WHO will not act, the world will not notice, and the few local people who remain here will ultimately have their memories erased in a new Russian-controlled Ukraine. That cannot be allowed.”

At the Makariv site, Kovtonyuk points out a series of regularly spaced crater holes in the grass around the destroyed clinic extending in a straight line toward the target. A Ukrainian artillery officer trained to inspect impact sites later confirms that this pattern of fire indicates soldiers attempting to fix a target. He believes a Russian mortar team of two was probably operating a kilometer or so away, while a spotter with communications was directing their fire within visual range of the target. This suggests that a group of Russian soldiers not only accepted an illegal order but also knew exactly what they were targeting and chose to destroy it.

Russian attacks on Ukrainian medical facilities have not yet sparked a major international backlash. Kovtonyuk is particularly critical of the World Health Organization (WHO). He points out that it wasn’t until the forty-second day of the war that the WHO Director General issued a statement condemning the invasion. According to Kovtonyuk, no internal sanctions under the WHO Constitution have been applied to the Russian Federation, while a recent resolution indicated that WHO officials may consider some measures if Russia continues its actions.

Kovtonyuk sees this as inadequate. “Russia’s Health Minister is still on the WHO Executive Council. He is also at Putin’s cabinet table together with Defense Minister Shoigu. He is directly culpable, but the WHO has done nothing to even mildly sanction the Russians. It hasn’t even disinvited them from a single Zoom meeting,” he comments.

Ukraine’s former deputy health minister admits to being frustrated by much of the Western response to the Russian invasion and accuses the Western establishment of failing to fully grasp the gravity of the situation. At the same time, he emphasizes that Ukraine has surpassed all expectations. “There is one thing that nobody counted on, whether it’s the Western establishment or Russian despots. Namely, that those cast as victims in this situation, the Ukrainians, would refuse to play that part. The victim will not be victimized. We fight, each in his own way. We do not fade or fold,” says Kovtonyuk.

This fighting spirit has turned an anticipated three-day military walkover into the largest European conflict since WWII. Ukraine’s remarkable resilience has won the admiration of the watching world but the country continues to pay a terrible price for its courageous stand. The deliberate targeting of Ukrainian healthcare facilities is one of the many war crimes Russia currently stands accused of as Putin seeks to break Ukraine’s will to resist. Attacks on healthcare facilities will serve as a focus for ongoing investigations as the international community seeks to hold Russia accountable for crimes committed in Ukraine.

Pete Shmigel is an Australian writer with a background in politics, mental health and Ukrainian issues.