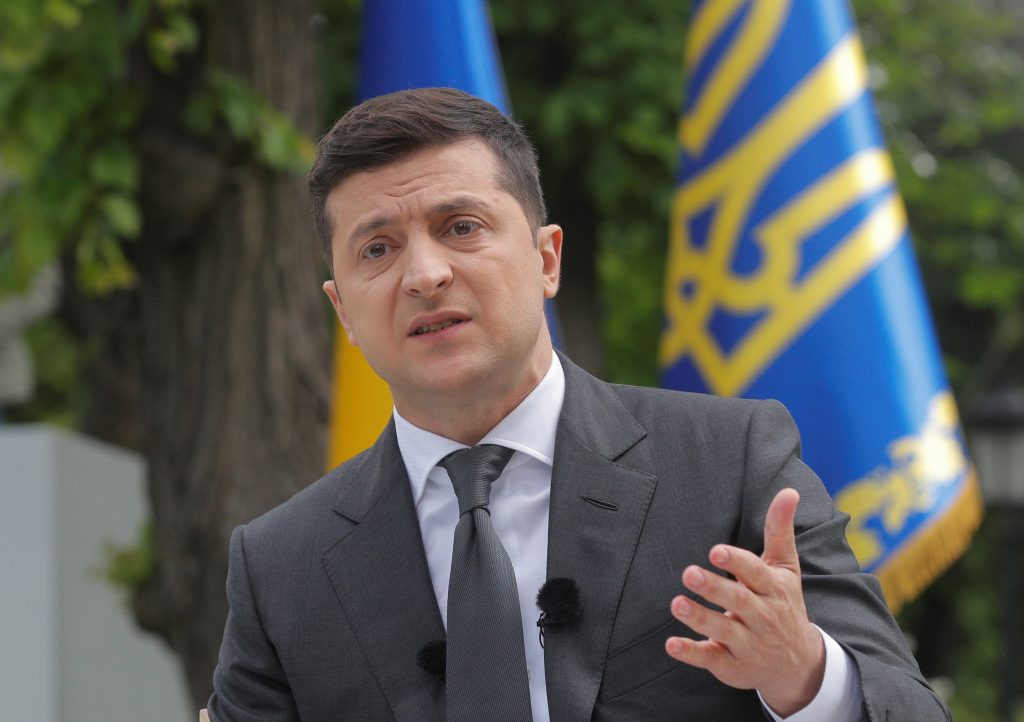 There is much talk of Russian revenge in Kyiv these days. As President Zelenskyy begins his second year in office, political opponents accuse him of pursuing an increasingly revanchist agenda and warn of escalating plots to return Ukraine to the Kremlin orbit. The country’s historic pivot towards Euro-Atlantic integration is in grave danger, they say.

Zelenskyy’s critics claim to see growing evidence of Kremlin influence throughout government. They cite the recent attempts to appoint toxic figures with ties to the pro-Russian administration of disgraced ex-president Viktor Yanukovych, and question Zelenskyy’s moderate stance on the traditionally thorny issues of language policy and national memory. Meanwhile, his one-sided efforts to reinvigorate the stalled peace process through repeated concessions to the Kremlin continue to generate deep suspicion.

These public displays of skepticism towards the Ukrainian president’s patriotic credentials ought to be welcome news in Moscow. In fact, the opposite is true. Far from delighting in Zelenskyy’s relatively non-confrontational stance towards Russia, the Kremlin now finds itself unable to explain why it cannot make progress towards peace with a Ukrainian leader who displays few of the nationalistic traits that served as mainstays of Russian propaganda for the previous five years.

Since Zelenskyy’s election victory in spring 2019, Russian officials and their colleagues in the Kremlin media have struggled to address the problematic optics created by the Ukrainian leader’s moderation and his status as a Jewish Russian-speaker. This task has been made all the more challenging by Zelenskyy’s popularity among the residents of Russian-occupied eastern Ukraine and inside Russia itself.

Moscow must contend with broadly favorable public perceptions of the former showman, who was a much-loved household name in both Ukraine and Russia long before he turned his hand to politics. Forty-one-year-old Zelenskyy’s youthfulness is thought to make him a particularly dangerous adversary for the aging Putin, who is currently seeking an extension to his presidency that would see him remain in office until 2036.

In the quest to discredit Ukraine’s young leader, one popular line of attack has been to underline Zelenskyy’s personal responsibility for bloodshed along the front lines of the conflict zone in eastern Ukraine. The May 19, 2020 evening news broadcast on Kremlin-controlled First Republic TV channel in occupied Donetsk began in typical fashion: “Military units of Ukraine, under the command of Zelenskyy, have opened first 21 times.” This kind of language has been the norm since the early days of the Zelenskyy presidency in spring 2019. The Ukrainian leader has also been the subject of frequent negative profiles on Russia’s leading TV channels, such as the October 2019 documentary “Zelenskyy and his Gang” on NTV.

Over the past year, a number of fairly consistent messages regarding Zelenskyy have emerged in the Kremlin media. He is routinely depicted as a puppet of either the United States or Ukrainian oligarchic interests, and is frequently accused of being too weak to stand up to Ukrainian nationalists.

Above all else, the dominant narrative is that he continues to pursue the same policies in relation to Russia as his predecessor Petro Poroshenko. “Kiev’s line towards confrontation and whipping up tensions in relations with Russia has been unchanged,” commented the Russian Foreign Ministry in a statement issued on May 20, 2020 to mark the first anniversary of the Zelenskyy presidency. “Ukraine keeps fighting against everything that somehow connects our nations. They continue attacks on the Russian language and culture, distort common history, glorify Nazism and desecrate memorials to Soviet soldiers.”

These Kremlin claims of Russophobic continuity are far removed from the reality of the situation in today’s Ukraine. Unlike his predecessor, Zelenskyy has sought to avoid potentially divisive issues such as the status of the Ukrainian and Russian languages. He has also maintained his distance from the endless memory wars that have rumbled on throughout the past three decades of Ukrainian independence. Instead, the former comedian has attempted to emphasize less politically explosive themes such as economic growth, the fight against corruption, and personal freedoms in business and private life. At the same time, he has made the intensification of peace negotiations the number one priority of his presidency.

Zelenskyy’s focus on such uncontroversial subjects has helped win over the silent majority inside Ukraine. This paved the way for his remarkable presidential and parliamentary election victories in 2019, and has since allowed him to maintain remarkably high approval ratings by the standards of Ukraine’s notoriously fickle fledgling democracy. According to a nationwide poll published on the eve of Zelenskyy’s first anniversary in office, almost 40 percent of Ukrainians would be prepared to back him in a new presidential ballot. Meanwhile, his current trust rating is an unprecedented 57 percent. In other words, despite numerous missteps since taking office, Zelenskyy remains comfortably the most popular politician in the country.

Zelenskyy is also thought to enjoy considerable popularity in Russian-occupied eastern Ukraine. Although accurate polling data from the occupied regions is impossible to come by, the former showman has already confirmed his ability to win majorities in traditionally pro-Russian constituencies throughout southern and eastern Ukraine. It is likely that this would translate into a strong showing if it becomes possible to hold local elections in the areas Donetsk and Luhansk oblasts currently under Russian occupation.

Zelenskyy’s bid to win hearts and minds in the occupied east has been a prominent feature of his presidency. Months after taking office, he unveiled a new pedestrian bridge at Stanytsya Luhanska that greatly improved mobility and connectivity for residents living on either side of the front lines. More recently, he has launched Dom (“Home”) TV channel, a Ukrainian state-run media project that aims to serve as a communications bridge between Kyiv and the populations of occupied eastern Ukraine and Crimea.

This new television channel initiative has attracted considerable criticism from the Russian occupation authorities in eastern Ukraine, while also receiving negative reviews from Zelenskyy’s political opponents in Ukraine. Viewed from a Russian perspective, the project is Ukrainian propaganda, while for critics in Kyiv, it is not patriotic enough. In a sense, these twin criticisms capture the essence of Zelenskyy’s current position. Having become the first Ukrainian president to secure similarly high levels of support throughout the entire country, he now finds himself assailed from the fringes by more extremist forces who object to the very moderation that made his success possible.

One year into his presidency, Ukraine’s comedian-turned-politician is proving a handful for Kremlin propagandists. It is clearly not in Russia’s interests to have a sustainable authority in Ukraine with enough legitimacy to organize the effective defense of the country and implement necessary but unpopular measures such as the recent agricultural land reform launched by Zelenskyy.

If this continues, Zelenskyy could eventually pose a threat to Russia’s domestic political stability. His meteoric rise is a nightmare scenario for Moscow that runs entirely counter to the managed democracy of the Putin era and has the potential to inspire copycat candidates.

In the more immediate future, the Ukrainian leader’s distaste for identity politics and ideological grandstanding will continue to pose awkward questions for Putin’s propaganda chiefs and undermine Kremlin justifications for the ongoing war in eastern Ukraine. After years of relentless disinformation demonizing Ukraine as a far-right dictatorship, Moscow must now explain why the arrival of the decidedly middle-of-the-road Zelenskyy has not brought the two countries any closer to peace. Discrediting the Ukrainian president will remain a Kremlin priority, but the old anti-Ukraine stereotypes are no longer sufficient.

Vitaliy Syzov is an analyst at the Donetsk Institute of Information NGO.