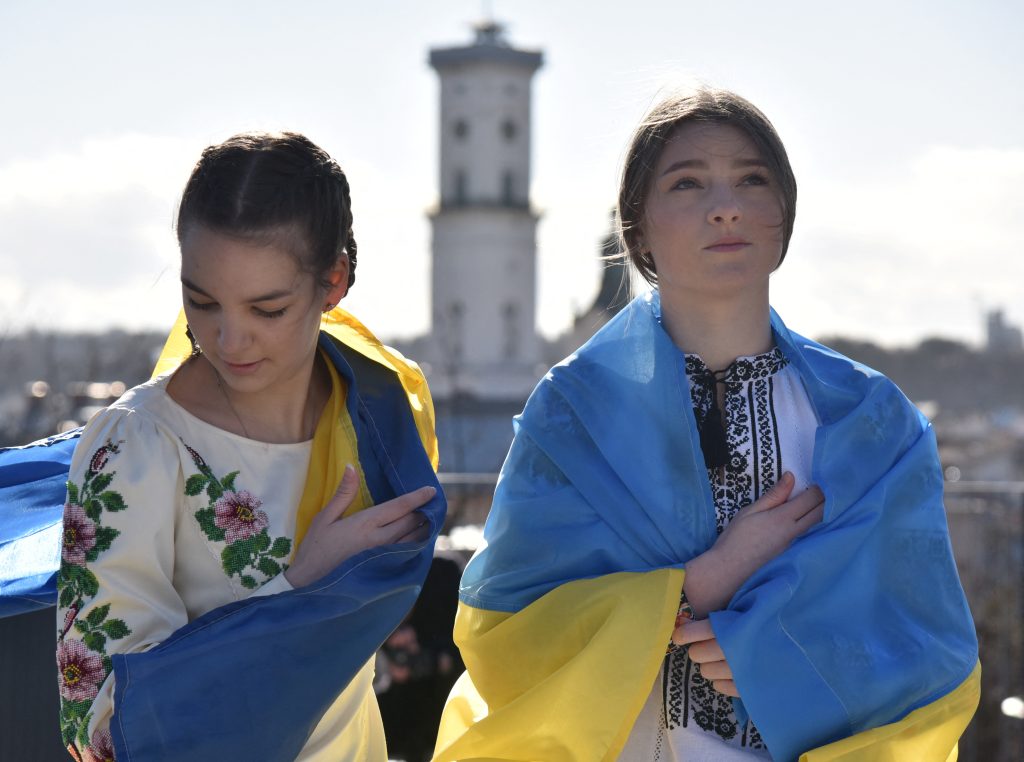 In the international discourse around Ukraine, the country has traditionally been portrayed as a divided nation with irreconcilable differences between east and west. This was always an unhelpful over-simplification of Ukraine’s complex political geography; since the onset of Russian aggression in 2014, fast-changing realities on the ground have rendered such stereotypes completely redundant.

With around 200,000 Russian troops currently concentrated on the Ukrainian border, Putin’s eight-year war against Ukraine is getting more global media attention than ever before. While this coverage is welcome, it has also underlined that current understandings of Ukrainian political and cultural identity are still often based on outdated assumptions.

Far too frequently, we are told that Russian-speakers in the south and east of the country are sympathetic towards Russia and broadly support separatism, while Ukrainian-speakers in central and western Ukraine want to join the EU and NATO. This is factually incorrect and deeply misleading.

Ukrainian national identity has undergone a dramatic consolidation since 2014. This process has been particularly evident in Ukrainian cities with predominantly Russian-speaking populations such as Kharkiv and Odesa that had previously been viewed as bastions of pro-Kremlin political sentiment.

Dr. Yuliya Bidenko, an associate professor of political science at Karazin Kharkiv National University, acknowledges that political and identity divisions between the many different regions of Ukraine have been visible since independence. However, she says the eight-year war with Russia has caused them to fade. Bidenko notes the striking similarities in the votes cast by residents of Kharkiv and Lutsk, a city on the other side of the country in northwestern Ukraine, in the 2019 presidential and parliamentary elections.

Dr. Sergii Glebov, an associate professor of international relations at Odesa Mechnikov National University, has observed the same phenomenon in the Black Sea port city in southern Ukraine. Glebov sees the conflict with Putin’s Russia as a unifying force for the whole country. “While certain divisions persist, Russian hybrid warfare against Ukraine has increased the sense of Ukrainian unity like never before.”

According to Volodymyr Chistlin, a freelance journalist and activist from Kharkiv, Ukrainians appreciate the international media attention they are getting in this challenging period of heightened alarm over a possible full-scale Russian invasion. However, Chistlin says it often seems that many in the West do not fully understand the extent of the issues Ukrainians are facing or the nation-building processes underway in the country.

Chistlin and Bidenko are both critical of international media coverage depicting Russia’s latest escalation as a “crisis.” They argue that the present situation can only be properly understood when viewed as part of an ongoing war that has already raged for eight years and has claimed more than 13,000 lives.

Russia’s latest saber-rattling build-up of troops has caused understandable anxiety among Ukrainians. But according to Bidenko, the expert community is more anxious about a possible escalation than the majority of Kharkiv residents. Many people in the city have distanced themselves from politics due to “war fatigue” and try to focus on their daily lives, she says.

The Ukrainian media has also played a role in this process, offering significantly less coverage of a potential Russian invasion than many Western outlets. President Zelenskyy himself has often walked a fine line as he has sought to promote calm among Ukrainian audiences while at the same time maintaining a sense of urgency on the international stage.

When Zelenskyy suggested to the Washington Post that Kharkiv could be occupied by Russia, this made many journalists, activists, and intellectuals in the city nervous. However, Bidenko says there is little real sign of panic in today’s Kharkiv, despite its close proximity to the Russian border.

The mood in Odesa is similar, with people well aware of the potential military threat facing the city but refusing to let it disrupt their everyday lives. At the same time, Glebov says preliminary preparations for a potential Russian invasion are also underway. Some Odesa locals have tentatively drawn up plans to move to western Ukraine or Poland, while others have signed up for territorial defense units to help protect the city.

Recent media coverage of Ukraine has highlighted lingering gaps in international knowledge of the country. Analysis of today’s Ukraine often feels outdated and has yet to catch up with the dynamic changes taking place as Ukrainians continue to emerge from the Soviet shadows and forge an independent identity.

While regional differences in opinion are still evident throughout what is the largest country wholly in Europe, notions of a divided Ukraine do not tally with the contemporary situation. On the contrary, there are growing signs of shared national interests and common positions linking people across the country.

Putin’s war has had a profound impact on Ukrainian identity and done more to strengthen national unity than any other single factor since Ukraine first achieved independence three decades ago. Indeed, recent polls have found that levels of readiness to defend the country are strikingly high in every region of Ukraine, including 58% of men in the east and 48% in the south.

From Kharkiv in the east and Odesa in the south to Lviv in the west and Kyiv in the north, Ukrainians have become significantly more united in opposition to a common enemy since the start of the war in 2014. With Ukraine’s fate currently at the top of the geopolitical agenda, it is vital that outdated stereotypes about the country are discarded and Ukrainians themselves included in any discussion of their future.

Lucy Minicozzi-Wheeland is a master’s student in Regional Studies: Russia, Eastern Europe, and Central Asia at Harvard. She lived in Odesa, Ukraine as a Fulbright Student Researcher from 2019-2020 and specializes in Ukrainian studies.

Russian President Vladimir Putin likes to claim that an anti-Russian genocide is underway in Ukraine but in reality he is upset by the historical loss of influence suffered by representatives of the Russian state.