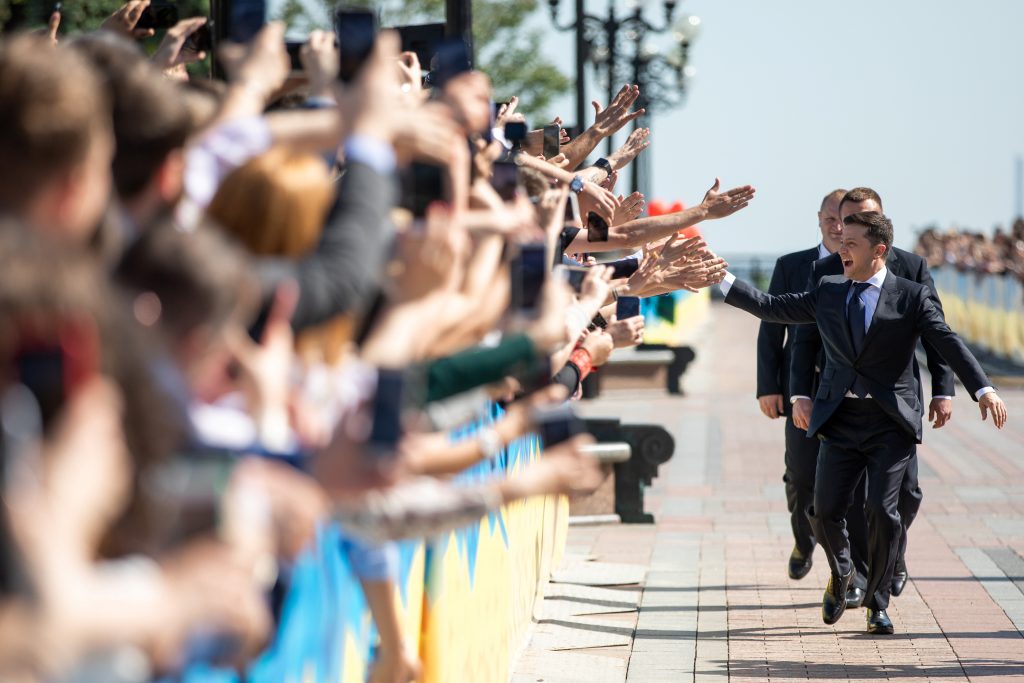 Ukrainian President Volodymyr Zelenskyy pictured on the day of his May 2019 inauguration. Zelenskyy's election was seen as a generational shift in Ukrainian politics, but the dismissal of his first government in early March 2020 was the latest in a series of setbacks as he struggles to live up to high expectations. Pavel Zmey/Ukrainian Presidential Press Service

On March 20, the Atlantic Council’s Eurasia Center hosted its first online public event entitled: “Big changes in Kyiv: What do they mean?” The theme of the event was Ukrainian President Volodymyr Zelenskyy’s early March government shake-up, which saw some of the country’s most prominent reformers removed and numerous old faces from discredited previous regimes return to power. Many observers saw this as the end of the honeymoon period for Zelenskyy, who took office in May 2019 as a protest vote president who promised to introduce fresh faces while drawing a line under decades of institutionalized corruption and political dysfunction.

Atlantic Council experts Anders Aslund, Melinda Haring, and John Herbst led the online discussion and sought to address what Zelenskyy’s dramatic reshuffle could mean for the future direction of the country. Due to time constraints, panel members were unable to address all of the questions posted by audience members during the event itself. Below are their replies to a selection of these questions.

Given that Ukraine cannot borrow in international markets and that the government desperately needs more income, what is standing in the way of a deal with the International Monetary Fund (IMF)? Is it an issue of passing land reform, dealing with PrivatBank, or other conditionalities set by the IMF? Is there a risk that, without a deal, Kyiv might go a different route, by borrowing from China or Russia, for example?

Dr. Anders Åslund, Senior Fellow, Eurasia Center, Atlantic Council: In this critical situation, the IMF is the only plausible course of financing. The IMF can deliver a large amount of funding fast and the conditions are few and clear. Effectively, Ukraine needs to pass land reform and adopt a law that makes it illegal to return nationalized banks to their former owners. Neither Russia nor China has demonstrated any ability to deliver large amounts of cash fast. Russia has simply never done it, and China demands purchases of Chinese goods.

Regarding Ukraine’s fiscal situation, what is the current status of the warrants that were attached to the sovereign debt that was restructured under former Ukrainian Finance Minister Natalie Jaresko?

Åslund: The warrants rose above par before the March 4 crash, but they are now down far below par and the government could repurchase them relatively cheaply.

There has been a shift in attitudes towards President Zelenskyy in the past few months. In the upcoming local elections, do you expect his Servant of the People party to dominate again as they did in the 2019 presidential and parliamentary elections? What is the mood among members of the party towards his recent changes? Will they stand up for reform or follow in Zelenskyy’s path?

Åslund: Servant of the People was really a popular front against the old establishment. As such, one could expect that its popularity would decline fast and that it would fall apart, since the party does not really stand for any concrete ideas. Alas, both of those expectations have come to fruition. Out of an original 254 members of parliament, about 30 MPs effectively became a Kolomoiskiy faction back in November 2019. After Ukraine reached agreement with Russia in the Minsk group to talk directly with representatives from the so-called Luhansk People’s Republic and Donetsk People’s Republic, about 60 members of parliament formed a democratic platform within the party, leaving around 165 party members still undivided. Further divisions are to be expected.

Melinda Haring, Deputy Director, Eurasia Center, Atlantic Council: It’s too soon to make predictions about local elections, especially with the COVID-19 crisis. Not everyone in Zelenskyy’s party is thrilled with the changes. There are still reformers within Servant of the People, so don’t write off the party just yet.

To what extent is the firing and replacement of cabinet ministers merely a move to reduce the power of the relatively independent ministries in relation to the president?

Åslund: The change of ministers was thoughtless and erratic. Zelenskyy is said to have wanted several ministers to stay, namely the ministers of economy, energy, and education, but they departed in protest against the mindless government change. The basic idea seems to have been to appoint people who were a bit older, professional managers, and from the “real economy.”

There were multiple calls from Ukrainian activists for the Minister of Internal Affairs, Arsen Avakov, to resign and be replaced, yet he’s one of the remaining holdouts. What is the reasoning here?

Åslund: Minister Avakov has a strong standing of his own and he was the guarantor of honest, free, and fair elections in April and July 2019.

Haring: Avakov yields tremendous power and Zelenskyy needs him because he keeps the peace and is one of the only experienced policymakers in the new cabinet. Even though Avakov has been accused of corruption and has a reputation for dealing in unseemly business, he’s cunning and a survivor. From a political perspective, Zelenskyy would be a fool to remove him.

Judicial reform remains one of the key issues that could benefit Ukraine and its economy since most investors look for strong rule of law. Does the current administration seem keen to push judicial reform through?

Åslund: Given that former Prosecutor General Ruslan Ryaboshapka was the leading judicial reformer, and he was sacked and replaced by a person with considerably less judicial credibility, it looks as if rule of law is much less of a priority for the Zelenskyy administration. Ryaboshapka’s three excellent deputies were also either sacked or resigned. Three motives are apparent: first, Ryaboshapka did not prosecute former Ukrainian president Petro Poroshenko, which his successor Iryna Venediktova is likely to do; second, Ryaboshapka blocked oligarch Ihor Kolomoiskiy’s shenanigans in the judicial system; and third, he pursued vigorous reform of the prosecutor general’s office.

Haring: Zelenskyy understands the connection between clean courts and investment, but important voices in Bankova hold back real reform. The new prosecutor general, a key Zelenskyy ally, is a real problem. She should continue to clean up the prosecutor general’s office but likely will not.

Does the removal of the former Prosecutor General, Ruslan Ryaboshapka, and subsequent appointment of new Prosecutor General Iryna Venediktova bode well for the relationship with the National Anti-Corruption Bureau of Ukraine (NABU)? Could this move be interpreted as a way of getting the prosecutor general’s office more in line with the work of NABU, or is that too hopeful?

Åslund: No, this does not bode well for NABU. NABU has been under attack from Zelenskyy’s circle for fighting corruption. It is next in line to be undermined, though the sharp negative reaction against Zelenskyy’s sacking of Ryaboshapka might save NABU for now.

Haring: Stop dreaming. The very good current head of NABU will likely be sacked soon. Zelenskyy is appointing loyalists. The new prosecutor general has never been a prosecutor and failed the legal skills test to join the Supreme Court. I don’t see how judicial reform will make any progress in the next four years.

What is your sense of the impact that the appointment of the new Minister of Defense, Andriy Taran, will have on the conduct of the war and relations with Western defense interests?

Ambassador John Herbst, Director, Eurasia Center, Atlantic Council: Minister Zahorodniuk had an excellent reputation in the West as a reformer. Minister Taran does not have Zahorodniuk’s reputation, but the West will work with him as with previous ministers in bolstering Ukraine’s defenses.

Haring: Let’s wait and see before we make pronouncements about the new defense minister.

We are already seeing nostalgia for the flawed reformers of the Poroshenko presidency and Zelenskyy’s first government. Is there a danger of setting unrealistic expectations for broadly pro-Western players in Ukrainian politics? Does this help create conditions for their political demise?

Herbst: Since the Maidan, reform in Ukraine has been driven by an alliance of reformers at ministerial and sub-ministerial level in parliament and civil society, with support from Western governments and international financial institutions. This alliance has worked against vested interests in Ukraine and has enabled senior leadership to implement reform. Harsh criticism of the reform process resulted from this dynamic because frustrated reformers bewailed the pace of reform. Of course, this criticism has been a problem for governmental leaders, especially at the top.

How do we underscore the point that Ukraine is still worth focusing on even while we criticize the changes taking place in the country? What can officials in the US and the European Union who are friendly to Ukraine’s civil society do to support them in this difficult time?

Haring: The West needs to change its language when we talk about Ukraine. Scolding isn’t going to work with Zelenskyy. Ukraine has enormous potential, but its leaders have let its people down again and again. We should have realistic expectations about the next four years. No one expects much on the domestic reform side.

Herbst: Ukraine has experienced two periods of rapid reform since the Maidan revolution: the first year and a half of President Poroshenko’s administration, and the first eight months of President Zelenskyy’s administration. While the recent governmental changes have prompted understandable concern about the fate of reform, a deal with the IMF is looming that requires the passing of major banking and land reform legislation.

In an emergency session as the country grapples with the coronavirus crisis, Ukraine’s parliament has voted for two bills that will open the way to new financing from the IMF and other international partners.