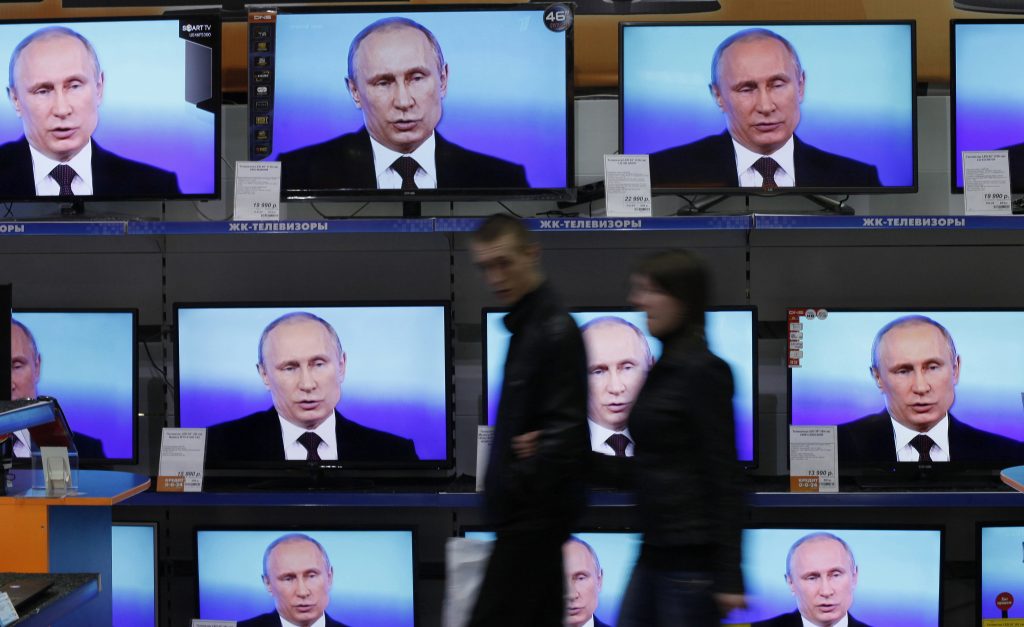 The Zelenskyy administration’s early 2021 decision to shut down a number of Ukrainian TV channels with ties to Putin ally Viktor Medvedchuk has refocused attention on the Kremlin’s ongoing efforts to manipulate Ukraine’s media environment.

This issue has been the subject of a lively public debate ever since the outbreak of hostilities with Russia seven years ago. Since 2014, Ukraine has taken a number of steps to counter Russian information warfare in Ukraine. Restrictions have included the banning of Russian TV channels, Russian social media platforms, and Russian-produced TV content.

While there is a broad consensus over the need for such security measures, less attention has been paid to ways in which Kyiv might be able to counter Russian propaganda by creating Russian-language media content independent of Kremlin control. With Russia once again escalating its disinformation attacks on Ukraine and seeking to target Russian-speaking Ukrainians, this topic is now particularly relevant.

The Zelenskyy administration certainly appears to recognize that simply banning Kremlin-connected Russian language media outlets is not a viable long-term solution. Instead, there is an understanding that Ukraine must look to counter Moscow narratives in the Russian-language information space by producing rival content capable of competing with the Kremlin.

Thanks to President Zelenskyy’s own extensive background in the television industry and the showbiz experience of many within his inner circle, hopes were high in 2019 that the new authorities would be able to make progress in the defense of Ukraine’s information space.

Early in 2020, Ukraine launched the Russian-language DOM TV. Initially, this new channel focused on reaching audiences in Russian-occupied eastern Ukraine and Crimea. In recent months, it has also begun broadcasting via satellite.

According to Andrii Ianitskyi of the Center for Journalism at Kyiv’s School of Economics, a special exemption in Ukraine’s language law was created in order to accommodate DOM TV and exclude the project from Ukrainian-language content quotas.

Much of DOM TV’s content initially came from three other Ukrainian TV channels. This Russian-language programming was provided based on the understanding that it would only be screened to audiences living in the Russian-occupied areas of Ukraine. However, in recent months, the channel has begun producing more of its own Russian-language content.

The challenges Ukraine is currently facing are mirrored elsewhere in the former USSR. While most post-Soviet nations are primarily concerned with countering heavily slanted Russian TV news coverage, this is not typically the biggest difficulty they face. On the contrary, news and current affairs programming is relatively inexpensive to produce. The real problems arise when it comes to big budget entertainment programming. This is where Russian TV tends to dominate, thanks to lavish funding and world-class production quality.

Gunta Sloga of the Baltic Center for Media Excellence says research consistently indicates that Russian-language audiences in the Baltic States watch Russian TV channels primarily for their entertainment value rather than as sources of reliable news or credible information. The Kremlin understands this, and uses high-quality entertainment content in order to attract audiences.

To help overcome these financing obstacles, the Nordic countries and the UK have provided some initial seed money for Russian-language media projects in the Baltic States. Despite facing budgetary limitations, Estonia has been able to produce some Russian-language programming for its state-owned Russian-language TV channel ETV+, which is now self-sufficient and funded via advertising.

In neighboring Latvia, the national government has not been as focused on creating Russian-language media of its own, while language laws make the importation of Russian-language content from Russia itself difficult. Instead, there are a number of relatively small Latvia-based Russian-language online media outlets such as Chayka.tv, which is based in the city of Daugavpils.

All three Baltic States share the same limitations in terms of small populations. In contrast, Ukraine is home to the world’s largest Russian-speaking audience outside of Russia itself. This makes Ukraine a natural hub for independent Russian-language media content. However, the weaponized role of the Russian language in Vladimir Putin’s ongoing hybrid war against Ukraine has greatly complicated the development of new Russian-language media projects in the country.

At this point, it is difficult to know what impact DOM TV is having. Galyna Petrenko of Ukrainian industry watchdog Detector Media says the channel’s audience share is unknown. She argues that there is significant scope for a greater Ukrainian role in the production of Russian-language TV content for regional audiences.

Petrenko notes that Ukrainian TV production companies are already co-producing growing numbers of serials and films for media markets in former Soviet countries such as the Baltic States and Georgia as well as nearby Poland. While not all of this is Russian-language content, she feels that Ukraine is well-placed to become a center for Russian-language media for Russian-speaking audiences throughout the former Soviet Empire and beyond.

While the debate over independent Russian-language media content has mostly revolved around the need to counter Kremlin disinformation narratives, the Covid-19 crisis has also highlighted opportunities to regain the information initiative. Sergei Stepanov of Estonia’s ETV+ says the channel’s audience has grown considerably during the pandemic as viewers have come to appreciate that their coverage is more credible and informative than the reporting coming from Kremlin-controlled TV outlets in Russia.

While a combination of political sensitivities and security considerations makes domestic Russian-language TV programming problematic in Ukraine, there may be scope for meaningful international cooperation between Ukrainian media professionals and their counterparts in the Baltic States, Georgia, Moldova, and other regions of the former USSR. This kind of partnership could help to erode the Kremlin’s current dominance of the Russian-language media sphere, while providing content that is free from Moscow’s messaging.