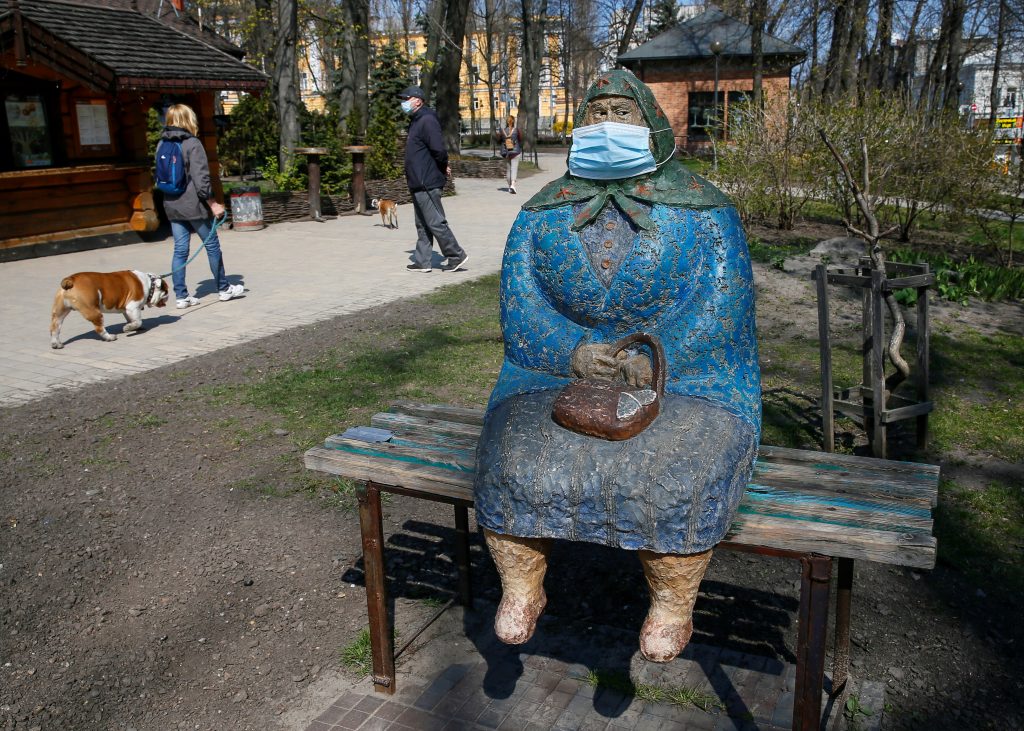 As April began, the official number of coronavirus cases in Ukraine continued to rise slowly but surely. While several significant clusters have been identified, the overall outbreak has yet to mirror the scale of the crisis witnessed elsewhere in Europe. Nevertheless, forecasts for Ukraine remain grim, with many believing that a chronic lack of testing and widespread misdiagnosis of patients are combining to mask the true extent of the epidemic in the country.

Crucially, there is a sense that the Ukrainian authorities have failed to make use of the vital weeks at their disposal since the emergency began to unfold internationally during the first few months of 2020. Rather than address the material shortcomings of the Ukrainian healthcare system or put effective communications and social support mechanisms in place, the government has struggled to articulate an effective strategy and wasted time on political infighting. Nowhere is this chaotic approach more immediately apparent than at the Ministry of Health itself, which has seen two changes in minister in less than a month. As the global crisis escalates, Ukrainians are now watching with a sense of dread and wondering whether their rickety healthcare system and dysfunctional government institutions will get it right in time to avoid catastrophe.

The most basic challenges facing the Ukrainian government lie in the country’s outdated and underfunded healthcare infrastructure. As is generally the case in Ukraine, money is a problem, with state-run hospitals and labs lacking the resources to deal with the pandemic. However, not everything is attributable to financial shortfalls. The inability to make quick and competent political decisions is also a problem.

There is no question that Ukraine’s healthcare system is dangerously underdeveloped. While a number of modern hospitals and clinics have popped up here and there throughout the country, these isolated pockets of progress stand in stark contrast to the vast majority of state healthcare facilities, many of which have received little if any investment over the past three decades of post-Soviet independence. With wealthier Ukrainians typically choosing to receive medical treatment abroad or opting for private clinics inside the country, public sector healthcare has continued to decline since the 1990s.

The situation would not be quite so desperate if recent healthcare reform efforts had not stalled over the past year. Beginning in 2017, acting Health Minister Ulana Suprun set out to reform and modernize the sector. However, she was quickly smeared and blocked by powerful vested interests who preferred to keep the country’s healthcare system operating in the murky and unreformed waters where it had long been stagnating. Suprun left office in late summer 2019 as President Zelenskyy’s team took control of the country. Her reforms continue on paper, but few expect to see any genuine progress.

Ukraine’s immediate response to the pandemic has been fraught with political complications. The government has at times seemed paralyzed by the coronavirus crisis, not only due to the number of lives at stake, but also because of the pandemic’s ability to highlight political shortcomings. Even before the current crisis had sparked a nationwide lockdown and raised the prospect of a major recession, the declining state of the Ukrainian economy and the ongoing war with Russia had already eaten into the previously stratospheric approval ratings of President Zelenskyy and his Servant of the People party. The inexperienced Zelenskyy and his team appear terrified of mishandling the crisis and justifying opposition charges of incompetence, leading to inaction and a dangerous lack of strategic vision.

The recent changes in government are a good example of the Zelenskyy administration’s somewhat chaotic approach to crisis management. It is rarely advisable to replace most members of the cabinet in the middle of a national emergency, as President Zelenskyy did on 4 March. The situation looks even worse when the subsequent ministerial changes of March 30 are taken into account. These changes meant that in the space of less than a month, Ukraine had three different health ministers and three successive finance ministers. Even if the appointments were good choices for the country, the new ministers faced the prospect of starting virtually from scratch, with their respective ministries robbed of continuity. This did little to quell fears over an apparent lack of leadership in the country.

Beyond infrastructure and political issues, there are a number of specific areas where Ukraine’s current coronavirus response gives cause for alarm. The number of coronavirus tests carried out remains strikingly low, while healthcare professionals also face acute shortages of medical equipment such as ventilators and personal protective clothing including masks and gloves. In an echo of the volunteer effort that saved Ukraine during the early days of the war with Russia in 2014, Ukrainian civil society activists and individual business owners have once again stepped up in order to provide underfunded hospitals with equipment, protective gear and much more. Such volunteerism is a staple of Ukrainian crisis management, but there is also a desperate need for increased government action.

Another crucial flaw in Ukraine’s official response to the coronavirus crisis has been the lack of an effective communications strategy. Quite simply, the government has bungled this issue badly. The public has not received sufficient information conveying the urgency and seriousness of the healthcare emergency facing the country. As a result, many Ukrainians still fail to recognize the threat and remain unwilling to alter their daily routines. While President Zelenskyy has addressed the nation on a number of occasions, there have been no regular briefings to maintain day-to-day awareness of the situation and keep the public informed of the government’s strategy towards the pandemic. A number of helpful non-governmental internet resources have appeared, but they are not able to reach sufficiently wide audiences and lack the necessary authority of officialdom.

The government’s poor communications strategy is a major weakness. It undermines efforts to implement official measures such as healthcare precautions for members of the public and the tightening of quarantine restrictions. The absence of official communications also creates a breeding ground for the spread of rumors and conspiracy theories that have the potential to spark panic and undermine national efforts to contain the pandemic. In a country that has been fighting as defensive information war against Russia for the past six years, this kind of communications failure is hard to fathom.

All in all, Ukraine appears to have wasted the precious weeks it has had since the impact of the pandemic became apparent in East Asia, Western Europe, and North America. That window of opportunity may soon close as Ukraine itself faces an escalating outbreak. The country is still materially unprepared for the crisis, with dramatic shortfalls in vital equipment ranging from ventilators to protective clothing. However, the early introduction of tough lockdown measures counts in Ukraine’s favor, while the country’s famed volunteer spirit is already rising to the occasion. These factors will prove crucial in the coming weeks as the country approaches the peak of the coronavirus crisis. In order to maintain effective quarantine conditions and other countermeasures during this period, Ukraine urgently needs to launch a systematic daily communications strategy capable of reaching the majority of the population.