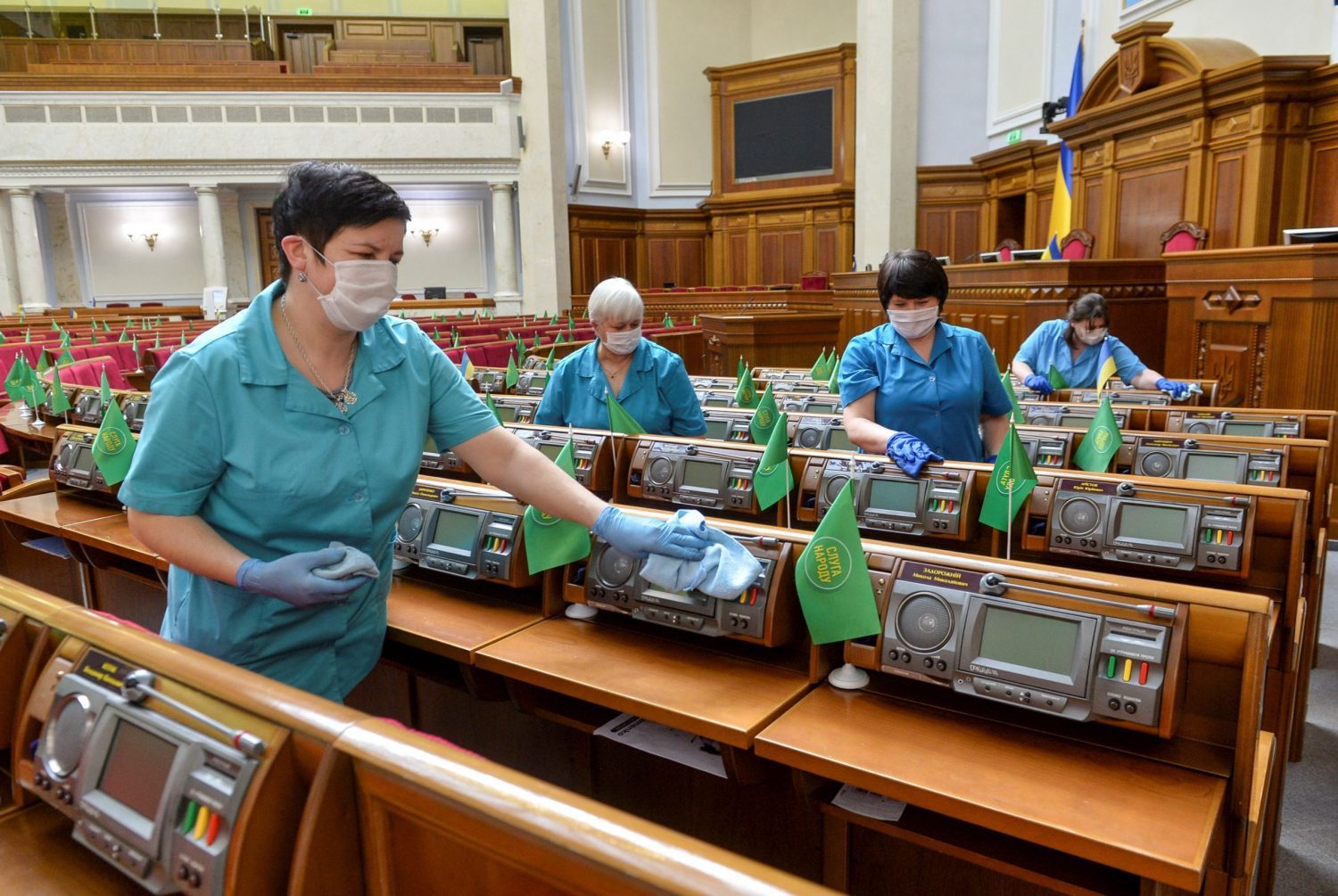 As the coronavirus pandemic continues to spread, global financial markets are in sharp decline and the international economic outlook is increasingly alarming. Indeed, the current panic is very much reminiscent of the meltdown during the Great Recession of 2008-2009, with added uncertainties as entire economies begin to enter preventative shutdown mode. As an emerging economy reliant on commodity exports, Ukraine is particularly vulnerable to such crises. The Ukrainian economy currently faces the prospect of a perfect storm as the price and volume of exports falls while domestic consumption and production plummet amid an unprecedented lockdown imposed across the country in order to fight the spread of the virus.

The Ukrainian government must act fast to avoid a repeat of the 15% GDP contraction the country experienced in 2009. Encouragingly, it can count on some relatively sound fundamentals. The banking sector is in a much better shape than it was in 2009; the level of government debt is relatively low; and the National Bank of Ukraine has ample reserves. Initial steps have been encouraging, suggesting an awareness of the need to stimulate the economy and ease the burden on businesses. Nevertheless, the sheer scale of the unfolding global crisis makes significant economic difficulties inevitable for Ukraine in the near future. What can policymakers do to sail through this storm?

The unfolding crisis has several components. First, there is panic in the foreign exchange market, with the hryvnia already experiencing a significant depreciation. Second, external demand for Ukrainian goods is collapsing. Third, there are numerous negative demand spillovers from declining exports. Fourth, measures to prevent the spread of coronavirus will have a major disruptive impact on both domestic production and consumption. We have a relatively standard playbook to address the first three components. The fourth requires somewhat more creative responses.

Addressing the currency issue is vital. During panics, investors typically liquidate their risky positions in countries like Ukraine and move their funds to safe havens such as US government debt. As a result, many countries experience depreciation of their currencies against the US dollar. Today, the spread between interest rates on corporate debt in emerging economies and the interest rate on short-term US government debt is rapidly increasing.

In such an environment, it is safe to assume that the IMF and other international institutions such as the World Bank and European Commission will be the only affordable sources of foreign currency. Setting up an IMF program to secure funding and thus also unlock access to other sources must therefore be a top priority for Ukraine.

The Ukrainian banking sector will have a key role to play in the coming months. Large fluctuations in the value of the hryvnia may be directly disruptive to the Ukrainian economy. The banking sector could come under a lot of stress if people panic and rush to withdraw deposits. The NBU must therefore provide abundant liquidity to Ukraine’s banks to ensure that the country’s banking sector operates smoothly. Given that Ukrainian banks are currently in much better shape than ever before, any concerns about insolvency should be mitigated. The central bank should decisively exercise its role as the lender of last resort. In doing so, it should not relax prudential requirements.

As inflation expectations are so tied to the exchange rate in Ukraine, a large depreciation of the hryvnia can generate high inflation expectations and hence inflation. Without trying to fix the exchange rate, Ukraine’s central bank should use its reserves to stabilize the foreign currency market. It should also be ready to use capital controls, which proved to be quite effective in 2014-2015, in order to tame any signs of mounting panic.

Ukraine must reckon with a collapse of exports and a consequent domestic recession. As the external demand for Ukrainian exports declines, some depreciation of the hryvnia is inevitable to absorb this negative shock. After all, that is the point of using a floating exchange rate regime. This is the first line of defense.

At the same time, the government should prepare to support export-oriented industries by providing tax breaks, loans, and other forms of short-term assistance to help these industries weather the crisis. Of course, this support should be very transparent and based on clear criteria.

The government should also support those most in need including low-income families, the unemployed, and the sick. Injections of cash to these vulnerable groups can not only mitigate the broader economic crisis via stimulated consumer spending, but also allow these groups to overcome the difficult period ahead.

To pay for this stimulus strategy, the Ukrainian government must seek to unlock additional funding by securing an IMF program. This will open the way to further resources such as EU macrofinancial support and World Bank loans for infrastructure projects, which are all conditional on having a program in place with the IMF.

Ukraine’s economy in the time of the coronavirus

Following a political reshuffle and the outbreak of COVID-19, the Ukrainian hryvnia is now falling, compelling the National Bank of Ukraine to intervene. Once again, Ukraine needs an International Monetary Fund program, but will it be able to conclude such a program fast enough?

Speed and precision are crucial. As the Ukrainian government will have limited resources for any stimulus packages, the response has to be fast in order to arrest the crisis before it takes over the economy. It must also be targeted to utilize precious resources most effectively.

The coronavirus crisis is in many ways unprecedented and will lead to entirely novel supply shocks that will reverberate throughout the Ukrainian economy. It will disrupt production in multiple ways, ranging from reduced labor supply as workers get sick or have to take care of children who are out of school, to shortages of input inventories. With restaurants, cafes, shopping centers and cinemas shuttered, entire sections of the economy are grinding to a halt.

The experience of the 1970s, when oil prices increased dramatically, teaches us that there is no simple solution to this type of shock. However, that crisis also serves as a reminder that there are opportunities in such challenges. The US oil and gas industries boomed in response to the high energy prices of the 1970s, for example.

Given that Ukraine badly needs investment in its healthcare system, the government can kill two birds with one stone. By spending heavily on healthcare via such measures as hiring short-term healthcare workers to attend to the sick and making coronavirus tests free for the public, the government can potentially reduce the consequences of the adverse supply-side shock, while also providing a much-needed fiscal stimulus.

The financial relief measures adopted by the Ukrainian parliament on 17 March, including tax breaks for the self-employed, cancellation of land and property taxes, and a relaxation of penalties on overdue tax payments, are a step in the right direction. Plans to create a state budget stabilization fund are also welcome. However, outside financial support will be vital to support a sufficiently large stimulus package, which is why securing a new IMF program is so important.

In conclusion, Ukraine faces very hard times ahead but we should not despair. The lessons of the Great Recession and other crises teach us that it is possible to avert the worst. The Ukrainian government should not attempt to reinvent the wheel, but should instead seek to use available lessons to develop a fast, decisive response to the crisis. Most of all, it is vital to act with the kind of urgency the situation demands.

Yuriy Gorodnichenko is a professor at the University of California, Berkeley.

Image: Employees use disinfectant while cleaning the Ukrainian parliament in Kyiv to prevent the spread of coronavirus. March 19, 2020. REUTERS/Stringer