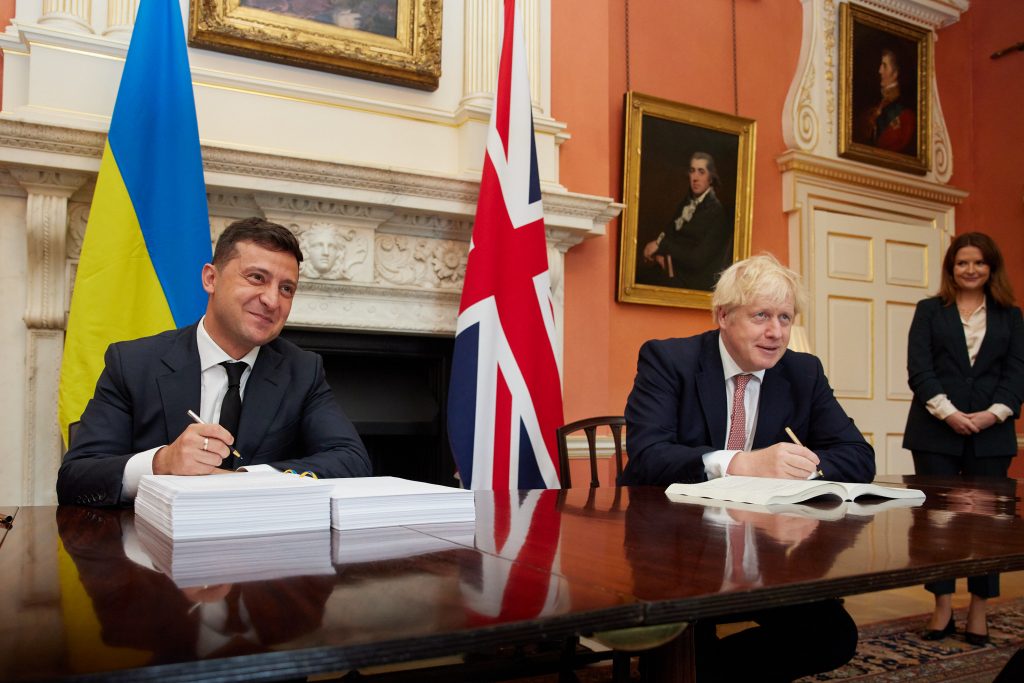 The jury is still out on the economic impact of Brexit, but Ukraine emerged in early October as an unlikely early beneficiary of Britain’s EU exit.

The UK and Ukraine signed an historic Political, Free Trade and Strategic Partnership Agreement on October 8 as London looked ahead towards the country’s post-Brexit future in 2021. UK Prime Minister Boris Johnson hailed the agreement as proof that Britain was Ukraine’s “most fervent supporter.” It marks a new chapter in UK-Ukraine relations and includes an ambitious free trade component that could now see economic ties strengthen considerably.

The trade element of the new UK-Ukraine Agreement envisages preferential treatment on a range of goods and services. It is based on the 2014 EU-Ukraine Association Agreement. Around 98% of Ukrainian goods will now receive greater access to the UK market, with tariff quotas maintained in most cases.

According to Taras Kachka, Ukraine’s Deputy Minister of Economic Development, Trade and Agriculture, this agreement will allow Ukrainian exporters to boost exports significantly next year once Britain completes its separation from the EU. For instance, the current quota for Ukrainian tomato paste exports to the EU is 10,000 tons. This will remain intact, while the new British agreement will open the way for an extra 2,000 tons of Ukrainian exports to the UK. There are also plans to expand current UK quotas in the coming years as Ukraine negotiates improved terms with the EU.

The deal offers a range of advantages for post-Brexit Britain. Crucially, freer trade with Ukraine will make a significant contribution to the UK’s food security. Britain is a major food importer and the new agreement means British consumers will benefit from a wider variety of affordable, high-quality Ukrainian products. Ukraine produces a great number of relatively inexpensive food products that are bound to appeal to British shoppers, including everything from honey to walnuts and a wide variety of fruit and veg. Ukraine’s rapidly evolving organic segment may prove particularly appealing to UK customers.

There is clearly room for growth. According to Gov.UK, trade between the UK and Ukraine was worth a modest GBP 1.5 billion in 2019, or around USD 2 billion. Top UK goods exports to Ukraine were aircraft, medicinal and pharmaceutical products, and cars. Meanwhile, key Ukrainian exports in the opposite direction included cereals, iron and steel.

The recently signed trade agreement is a win-win for both nations. British Prime Minister Boris Johnson has demonstrated his commitment to expanding Britain’s global footprint after Brexit, while Ukrainian President Volodymyr Zelenskyy has secured what is arguably his first major foreign policy victory since taking office in May 2019.

This success comes against a backdrop of grim international economic forecasts. According to an IMF report released in June, global output is set to contract by 8% this year, representing the biggest drop since World War II. Meanwhile, global trade volumes will fall by 10% as a result of coronavirus-related disruption, according to the World Trade Organization.

The coronavirus crisis has amplified existing pressures on global trade. Since 2017, the Trump presidency has marked a shift in US policy away from trade liberalization, leading to the rise of economic nationalism elsewhere. This has been bad news for developing economies like Ukraine, which are traditionally vulnerable to restrictions on exports. The deteriorating international trade picture and pessimistic outlook make the recent breakthrough in UK-Ukraine trade ties even more welcome.

In order to achieve further progress, Ukraine must now look to enhance its competitiveness amid the new economic realities that are emerging from the coronavirus crisis. Politicians in many countries have responded to today’s challenging conditions by seeking ways to reduce their reliance on imports from China. This creates considerable opportunities for Ukraine as an alternative manufacturing hub. Ukraine is advantageously located on the eastern border of the European Union with convenient trade connections to EU member states, the UK, and countries throughout the Middle East and North Africa.

As countries adapt to the coronavirus crisis, one of the biggest growth areas is the digital economy. This is a sector where Ukraine can potentially make a major contribution. The Ukrainian IT industry has grown rapidly over the past decade and currently accounts for around USD 4 billion in annual exports. This figure could rise considerably in the coming years if Ukrainian IT companies are able to tap into the global hunger for new digital solutions.

One niche that may be worthy of special attention is the fintech industry. Many companies in the City of London already rely on Ukraine for IT support. With UK-Ukraine ties now placed on a new strategic level, Ukrainian IT companies should be looking to play a far more prominent role in the UK’s vast financial services sector.

Looking ahead, the Ukrainian leadership should be seeking to integrate the country’s economy into global supply chains and producing far more value added products for export. Much of Ukraine’s export economy remains concentrated in raw materials, but value added products offer the promise of higher revenues.

Significant efforts are also required in order to educate the Ukrainian business community about the opportunities created by trade deals such as the new agreement with the UK. There has already been some progress in this direction following Ukraine’s Association Agreement with the EU, but much more can be done. Likewise, Ukraine must look to do a better job of selling itself internationally and needs to raise its profile considerably at international trade-related events.

Ukrainian diplomats may have a role to play in this process. Ukraine’s Minister of Foreign Affairs Dmytro Kuleba has spoken of his determination to revamp Ukraine’s foreign service in order to cater to the needs of Ukraine’s business community. He has outlined encouraging plans to focus on economic diplomacy with the goal of expanding to new markets. The UK-Ukraine Strategic Partnership Agreement is a great stepping stone in this direction. Kyiv must now pursue similar mutually beneficial trade deals with other countries.

Since 2014, Ukrainian exporters have succeeded in significantly expanding their horizons, but there is still a huge amount of potential that remains untapped. A bigger role in the global economy could have a major influence on Ukraine’s future development. It will help fuel the country’s domestic economic growth and attract international investment to the country, while also strengthening Ukraine’s geopolitical position.

Vasyl Myroshnychenko is a Partner at CFC Big Ideas and a board member of the Ukrainian-British City Club.