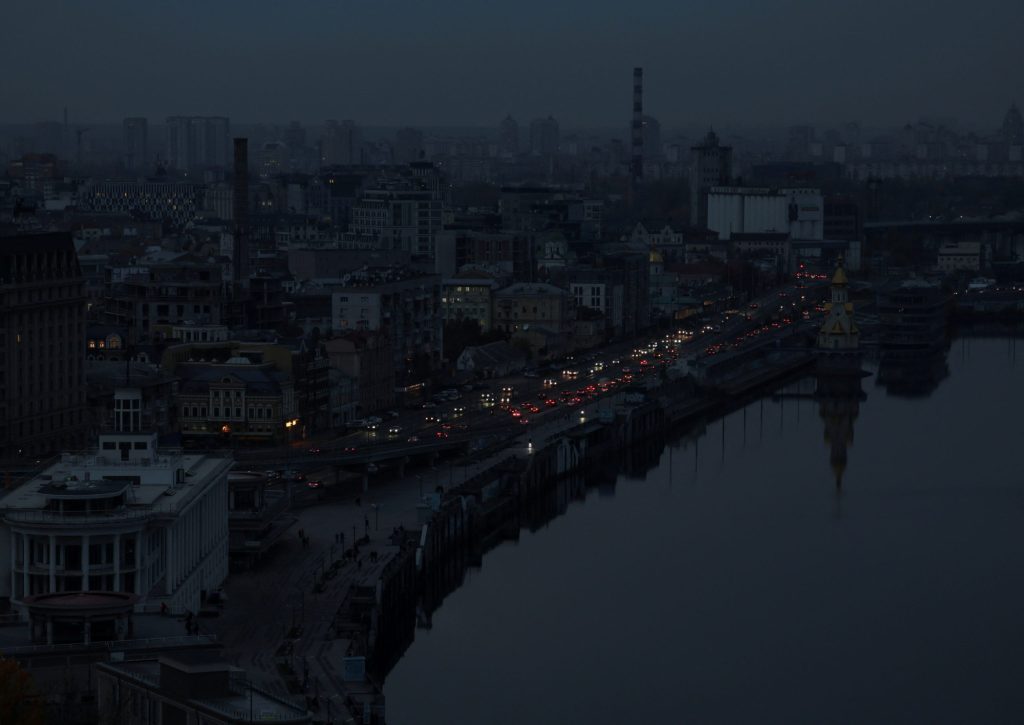 In Kyiv and other cities across Ukraine, rolling power blackouts are now the new normal. With Russia’s terror-bombing campaign of civilian targets and critical infrastructure currently in its third week, the Ukrainian government has been forced to limit electricity and impose regular cutoffs in order to preserve energy amid damage to around 40% of the country’s power grid.

Vladimir Putin hopes that by destroying Ukrainian infrastructure and depriving the civilian population of essential services such as heating, water, and electricity, he can break Ukraine’s will to resist and force the Kyiv authorities to accept a peace deal on Moscow’s terms. So far, there is little sign of that happening. Instead, Ukrainians are responding to Russia’s terror tactics with the kind of resolve that has characterized the country’s war effort ever since the invasion began eight months ago.

A new nationwide poll released this week underlined the current mood of defiance across the country. Conducted on October 21-23 by the Kyiv International Institute of Sociology, the survey found that 86% of respondents supported the continuation of Ukraine’s military counteroffensive and rejected negotiations despite Russia’s escalating airstrikes against civilian targets.

This latest data point provides an indication of attitudes in Ukraine as Moscow’s terror-bombing campaign reached the two-week mark. It mirrors a number of earlier surveys which have consistently identified little Ukrainian appetite for any territorial concessions to the Kremlin.

This rousing Churchillian rhetoric has been accompanied by generous helpings of the good humor that Ukrainians have become renowned for over the past eight months. Ukraine has emerged as something of a social media superpower since the start of the Russian invasion, with the country’s ability to embrace dark humor in even the most desperate of situations striking a chord among international audiences. As the lights have gone out in recent weeks, many have quipped that the move will backfire on the Kremlin and lead to a baby boom, resulting in many more Ukrainians at a time when Putin is so desperately trying to destroy the nation.

There is nothing funny about Russia’s intentions, of course. Kremlin officials and regime proxies make no effort to disguise the fact that their bombing campaign is an attempt to render Ukraine uninhabitable and force millions of citizens to flee the country. For the past month, government officials and other prominent pundits have regularly appeared on Russia’s carefully choreographed state TV political talk shows to express their support for targeted attacks on Ukrainian civilian infrastructure and to demand an expansion of airstrikes.

The current offensive represents a dramatic escalation in Russia’s invasion at a time when Moscow already stands accused of committing genocide in Ukraine. Russian troops have reportedly engaged in systematic human rights abuses and mass executions throughout areas under Russian occupation, while tens of thousands of civilians are believed to have been killed when Putin’s forces reduced Ukrainian port city Mariupol to rubble during the early months of the war.

Meanwhile, Russian occupation authorities have allegedly subjected more than a million Ukrainians including thousands of children to forced deportation while eradicating all symbols of Ukrainian statehood and identity in areas under their control. The forced deportation of children is classified as genocide under international law.

Ukrainian Foreign Minister Dmytro Kuleba argued on October 22 that the current wave of airstrikes against civilian targets was further evidence of Russian genocide in Ukraine. “Deliberate strikes on Ukraine’s critical civilian infrastructure are part of Russia’s genocide of Ukrainians,” he posted, noting that the 1948 United Nations Genocide Convention specifically refers to “Deliberately inflicting on the group conditions of life calculated to bring about its physical destruction in whole or in part.”

Despite a chorus of international condemnation, Russia shows no signs of ending its airstrike offensive. The key question now is whether Ukraine can repair its battered civilian infrastructure quicker than Russia can destroy it. Much will also depend on the willingness and ability of Ukraine’s international partners to deliver new air defense systems capable of protecting Ukrainian skies. However, even in a best-case scenario, military experts warn that no air defenses are impregnable, with some missiles and kamikaze drones always likely to get through.

The coming months will be yet another test of Ukrainian resilience. With Russia unable to defeat Ukraine on the battlefield, Putin is now seeking to terrorize the civilian population into surrender.

At present, this brutal plan looks to be one of the Russian dictator’s many miscalculations. Time and again, his apparent failure to understand the true nature of the Ukrainian nation has led him to take self-defeating steps that have merely served to deepen the increasingly bitter divide separating Ukraine from Russia. Putin’s terror tactics are now visibly strengthening Ukraine’s resolve to defy him.

Despite the mounting hardships caused by the Kremlin’s blackout blitz, most Ukrainians remain optimistic about the prospects of ultimately defeating Putin’s invasion. This comes as no surprise. After all, attacks on civilian infrastructure have minimal military value and are unlikely rob Ukraine of the battlefield initiative or transform the fortunes of Russia’s demoralized and decimated army. Nevertheless, with each new wave of bombings, the price of Ukrainian victory will increase further and more horror will be inflicted on the civilian population.

Ukraine has a Russia problem not a Putin problem

Ukraine appears poised to defeat Putin’s invasion but Russia will continue to pose an existential threat to Ukrainian statehood until Russians learn to accept that Ukraine is a sovereign and independent nation.