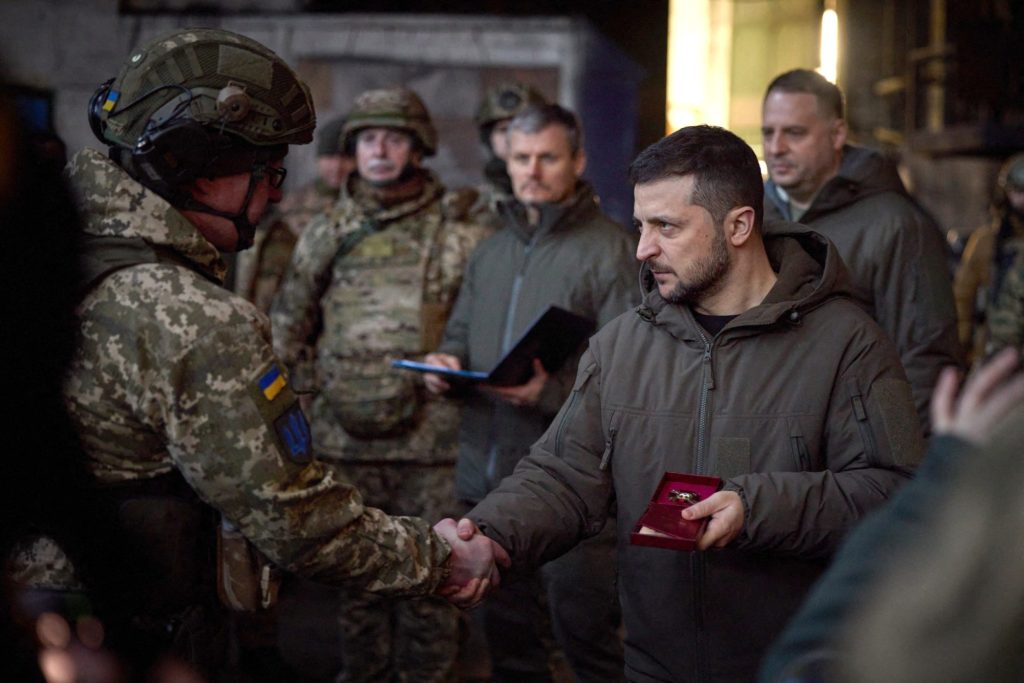 Ahead of the Christmas holiday, Ukrainian President Volodymyr Zelenskyy paid an official visit to the United States. While in Washington DC, he presented the American people with a symbol that is very dear to our hearts: a Ukrainian flag signed by The Watch, as we call the defenders of Bakhmut, a city in eastern Ukraine that is currently witnessing some of the fiercest fighting of the Russian invasion. This flag is a powerful symbol of the global fight for freedom taking place in our country.

In recent months, Bakhmut has become a fortress. Thousands of Ukrainians are on the front line fighting for freedom. Their daily struggle takes place knee-deep in mud and on frozen ground. Freedom is defended inch by inch in the trenches and amid the rubble of a shattered city. Ukraine is currently sacrificing its best people in defense of the free world. They are paying the highest possible price to safeguard their nation’s existence and the right to choose a democratic future.

The situation in Bakhmut is extremely difficult. Before the war, I had not had the opportunity to visit it, but I knew by reputation that it was an extraordinary city of sparkling wines, salt, and roses. Journalists, historians, and local artists have long called Bakhmut one of the most picturesque cities in eastern Ukraine. Based on my recent experience, I believe these claims are an understatement: the magic of Bakhmut is still evident, even though the city now lies in ruins.

Since summer 2022, Putin’s generals have concentrated their forces around Bakhmut in a desperate bid to seize the city. It has become a symbolic prize for the Kremlin that far outweighs any strategic value. They launch wave after wave of massive attacks, often suffering catastrophic casualties. In Russia, soldiers have always been viewed as expendable. This remains true today. But they are many and we also suffer painful losses.

Despite the horrors of the battle, we know we must prevail. The essence of our defensive operation is not just to contain the enemy’s efforts but also to destroy a significant part of their offensive potential, both in terms of human resources and equipment. Thanks to a combination of daily heroism and military skill, Ukraine’s defenders have managed to disrupt the enemy’s plans consistently for the past few months. The Russians are unable to make strategic gains. Nevertheless, the battle continues. And the city of salt stands strong like steel.

Spending time with the Ukrainian military in Bakhmut was a great personal honor. President Zelenskyy spoke before our heroes to the accompanying sounds of the heavy artillery exchanges. We knew that at any moment, the conversation could be interrupted by a projectile sizzling above or exploding nearby.

Our visit was just a one-day trip, but the Watch of Bakhmut have been living with the reality of total war for months. Indeed, there are many Ukrainian soldiers in Bakhmut who have been fighting since the Russian invasion first began in 2014. They are ready to fight until the very end, until Ukraine’s victory.

These courageous men and women deserve to come back alive. For this to happen, they need effective weapons and reliable protection. They also need somewhere to return to. Their families must be safe and secure in homes with basic amenities such as electricity and heating. In order to achieve this goal, Ukraine’s skies must be secure.

Democracy cannot be taken for granted. Today, Ukraine is the main battlefield in the global struggle against resurgent authoritarianism. It is clear to Ukrainians that we are not only fighting for our freedom; we are fighting to defend the values of liberty and justice for the entire world. The dilemma is simple: if Ukraine wins, the free world wins; if we lose, all who value democracy and freedom will also lose.

We are confident the people of the United States and President Biden understand perfectly well what is at stake in Ukraine. We wholeheartedly appreciate the support provided to our country. Every single hard-earned US dollar is a bullet aimed at autocracy. This is the arsenal of democracy at work. Americans know the true value of freedom and appreciate the price Ukrainians are paying.

We are extremely grateful for America’s recent commitment to continue supporting Ukraine in 2023. It comes at a critical moment in the conflict. However, we are also acutely aware that US support must remain strong. In order to defeat Russia, Ukraine must receive more heavy weaponry, air defenses, and long-range missiles as well as ammunition, drones, armored vehicles, and much more.

The democratic world cannot afford to lose this war. If Russian dictator Vladimir Putin succeeds in Ukraine, he will inevitably wage further wars of aggression. Crucially, other dictators will view Russia’s success as a green light for their own invasions, plunging the entire world into a new era of violent instability.

There is nothing inevitable about this descent into international lawlessness. It can still be prevented by standing resolutely with Ukraine. The Watch of Bakhmut represent the front line in the global fight for freedom against a rising tide of authoritarianism. By supporting Ukraine today, Western leaders and societies are investing in a better tomorrow.

Andriy Yermak is the head of Ukraine’s Office of the President.

The February 2022 Russian invasion of Ukraine was meant to extinguish Ukrainian statehood but Putin’s plan has backfired disastrously and united Ukraine as the country fights for its right to exist, writes Taras Kuzio.