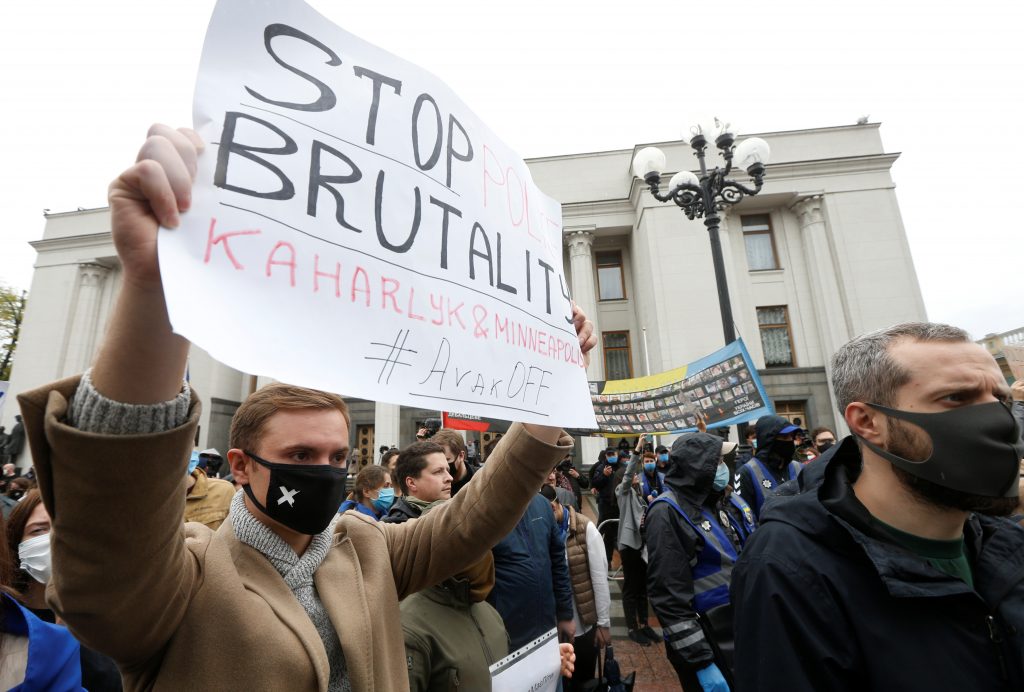 On May 24, 2020, Nelya Pogrebitska from Kaharlyk in the Kyiv region was brought to a local police station to be questioned as a witness to a theft. According to Ukraine’s State Investigation Bureau, police officers then tortured and raped the 26-year-old several times. On the same evening, police officers also allegedly beat another man in custody at the same station.

These incidents have helped spark renewed public debate over Ukraine’s law enforcement shortcomings and highlighted the failure of police reforms initiated in the aftermath of the country’s 2013-14 Revolution of Dignity. Despite much initial optimism, it is painfully clear that old problems remain.

Six years have passed since protesters were gunned down in the heart of Kyiv during the revolution, but “not a single official, police officer, judge or prosecutor has gone to prison for these crimes.” On the contrary, “36 of the 66 suspects in the killings continue to work in law enforcement, ten of them in leadership positions.”

Meanwhile, attacks on civic activists continue at alarming rates and, according to the NGO ZMINA, over “90% of these incidents are not properly investigated”, either because police themselves may have connections to those who order the attacks, or simply because there are not enough investigators to handle the cases. Minority populations such as the Roma are frequently attacked while police are accused of doing nothing in response.

According to critics, these issues reflect the wholesale failure of the much-trumpeted law enforcement reforms introduced over the past five years. They argue that widespread criminal behavior by Ukrainian police officers, investigators, and prosecutors remains unchanged, and in some cases has actually gotten worse. By failing to address systemic issues at the Interior Ministry and throughout the criminal justice system, the reforms have proven to be nothing but a temporary face lift. Instead of genuine change, Ukraine has witnessed a superficial response to deeply ingrained problems.

Following the traumatic events of the Revolution of Dignity, police reform was at the forefront of the country’s transformational agenda. One of the first moves, the decision to disband the 14,000-strong elite Berkut police unit blamed for the deaths of protesters during the revolution, was relatively easy. Problems would begin to emerge once attention turned to replacing discredited law enforcement units and personnel.

Those working to reform the police at this time drew their inspiration from the radical Georgian police reforms implemented under then-President Mikheil Saakashvili. Several prominent Georgian police reform experts came to Ukraine to implement changes. Eka Zguladze, who had been Georgia’s First Deputy Minister of Internal Affairs from 2006 to 2012, served as Ukraine’s First Deputy Interior Minister from December 2014 until May 2016. Khatia Dekanoidze, who had previously been Georgia’s Minister of Education and Science, became the head of the Ukrainian National Police in November 2015 and remained in the post for a year.

The initial impact of these changes was overwhelmingly positive. Ukrainians enjoyed being photographed with these new patrol police, with police selfies trending on Ukrainian social media throughout late 2015 and early 2016. The outside world also buzzed with enthusiasm for what was seen at the time as “perhaps the most visible break with Ukraine’s Soviet past”.

To many in Ukraine’s civil society community such as Maria Koliadina, an activist who works for the NGO “MI” in Kremenchuk, these changes weren’t convincing. “Most of the higher ups and those who constituted the system remained in their positions, the same old militia guys. So even with the new uniforms, cars, and young people working for them, the nature of the system wasn’t that different.”

According to a report by the Kharkiv Institute for Social Research, “almost none of the initial reforms were effective in addressing serious issues of police brutality, corruption, and impunity.” Crucially, key personnel from the old guard have also remained in place. Only about 12,000 of Ukraine’s 140,000 police personnel are patrol police, while 93 percent of the police officers dismissed after re-certification have since returned to their positions through court appeals, according to former National Police head Dekanoidze. Plans for higher salaries have also failed to materialize, with low pay helping to fuel continued corruption.

Judicial reform is an essential step on Ukraine’s path to progress. So why does the issue keep stalling in Kyiv?

Many say that Ukraine’s attempts to change a highly hierarchical system from below were fundamentally flawed. Eka Zguladze served as First Deputy Interior Minister, but old-style Ukrainian political heavyweight Arsen Avakov remained in his position as Interior Minister, a post he has held since early 2014. Critics accuse Avakov of calmly waiting until the reformers got tired of being blocked by him and his lieutenants.

The Interior Ministry of Ukraine is a monolith in Ukrainian society. It comprises around 300,000 employees including the National Police and National Guard along with migration and border services. Since Ukrainian independence, the ministry has retained a strong, centralized, Soviet-style institutional character and is virtually independent from politics, making it largely immune to changes taking place elsewhere in Ukrainian society. Arsen Avakov has controlled this vast empire for the past six years, surviving numerous changes of government including the transition from President Poroshenko to President Zelenskyy. Many now regard Avakov as one of the most influential politicians in the country.

After a series of attention-grabbing recent policing failures, calls to remove Avakov have mounted. According to Daria Kaleniuk of the Anti-Corruption Action Center in Ukraine, Avakov must go. “Instead of getting rid of rotten police officers, [Avakov] has ensured impunity for them and thus encouraged more police violence, which we are now witnessing. This buys Avakov the loyalty of many crooked people within the corrupt system. Avakov treats police and the national guard as his personal private armies.”

While Avakov’s removal could help to disrupt the current hierarchy, it would be unlikely to change the overall structure of the Interior Ministry. Erica Marat, author of “The Politics of Police Reform: Society against the State in Post-Soviet Countries”, notes that the police and interior ministry cannot be expected to reform themselves. Instead, more oversight is required, especially by members of civil society. Marat argues that it was precisely this lack of civil society involvement that doomed Ukraine’s post-2014 police reforms to failure.

Ukraine’s bungled police reforms proved unable to address systemic issues within the criminal justice system. In order to succeed, any future reform efforts must seek to break up the autocratic structure of Ukraine’s Interior Ministry and law enforcement organs from the top down. Until that happens, there is unlikely to be any major shift away from the culture of corruption, violence, and impunity within the ranks of Ukrainian law enforcement.

Liliane Bivings is an Intern at the Atlantic Council’s Eurasia Center. She previously served as a Peace Corps Volunteer in Ukraine.