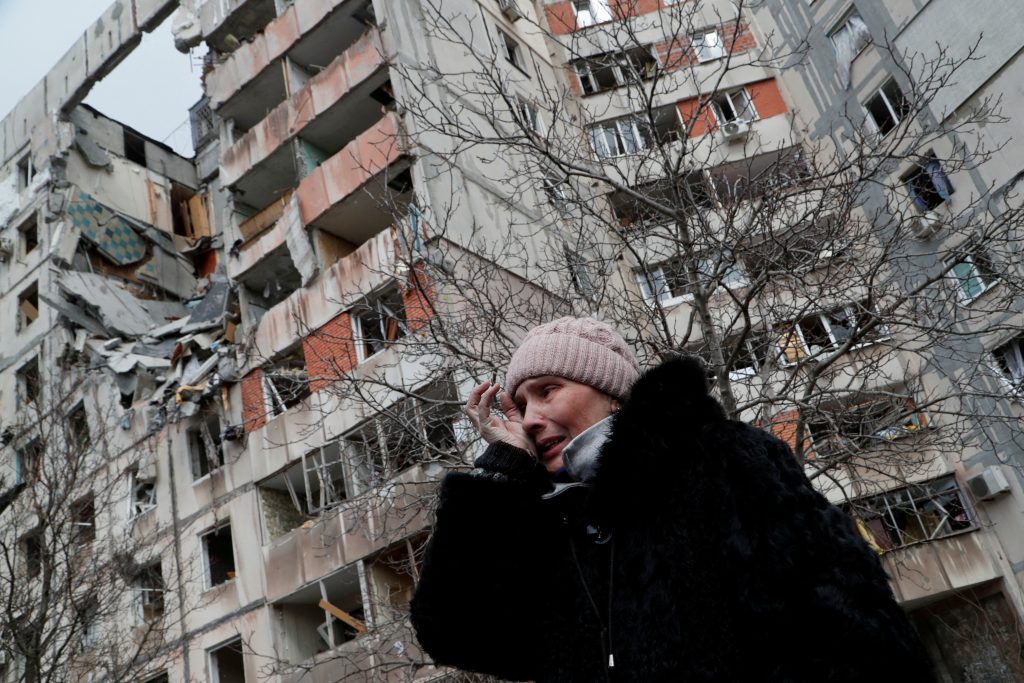 The Russian invasion of Ukraine is bringing back memories of earlier attempts by the Kremlin to extinguish Ukrainian statehood aspirations and crush the country. As Putin’s invasion force intensifies the destruction of Ukrainian towns and cities, the war offers alarming echoes of past Russian aggression towards Ukraine and provides the strongest clue as to how Ukrainians will respond.

Even longtime Russian observers were stunned by Russian President Vladimir Putin’s February 21 speech condemning Ukraine and setting the stage for the current invasion. Signaling a more sinister chapter in a grinding eight-year war, a visibly emotional Putin decried the loss of not only the Soviet Union but of the Russian Empire. Blaming the Bolsheviks for the creation of Ukraine, he called Vladimir Lenin Ukraine’s architect and threatened to dismantle the country in the spirit of “true decommunization.”

For Ukraine experts, many of the horrifying aspects of Russia’s current invasion feel all-too-familiar. They quickly understood that Putin had made a landmark speech, denying Ukraine’s existence and reaffirming the historical foundations of his poisonous world view.

For those who have long studied Russian attempts to co-opt and control Ukrainian independence and sovereignty, a pattern is now emerging that harkens back to Ukraine’s statehood struggle in the early twentieth century and especially to the genocidal tactics favored by the Stalin regime in the 1930s. Although such comparisons may once have seemed excessively dramatic, Putin’s language of national denial and destructive military tactics offer direct parallels with the worst crimes of the totalitarian era.

The most notorious Kremlin crime to date in Ukraine remains the Stalin era Great Famine, referred to by Ukrainians as the Holodomor (“killing by hunger”). This artificially engineered famine in the early 1930s changed Ukrainian society forever, killing at least four million Ukrainians.

Recently declassified documents present a strong academic case for genocidal intent by Stalin in response to Ukrainian rebellions against collectivization and lingering hopes for an independent Ukrainian state. Whole villages were wiped out by hunger in a land of unrivalled fertility that served as the Soviet breadbasket. Lively communities known for their rich folk traditions were transformed into silent wastelands.

Stalin nearly got away with this terrible crime. All reference to the famine was suppressed until the collapse of the Soviet Union, when research into the atrocity finally became possible. Growing awareness of the famine has been one of the most significant developments in Ukrainian national memory since the dawn of independence.

Much of the specific violence we see today echoes the 1930s. Atlantic Council military fellows predict that Russia may be currently seeking to unleash a new famine in Ukraine. We also observe the modern targeting of civilians, including countless residential buildings and an evacuation train, and remember the Soviet pursuit of peasants fleeing their terror campaigns at train stations.

We note the kidnapping of mayors, detention of Crimean governmental leaders, and attacks on journalists, and remember similar moves to destroy Ukraine’s national leadership during the 1930s. The world has also been appalled by evidence of a willfully inflicted humanitarian disaster in besieged Mariupol, recalling similar Soviet military attempts to seal 1930s villages to prevent hunger-driven escape.

As many Ukrainian leaders across professional fields have told me since 2015, Holodomor memories and Russia’s refusal to acknowledge this crime have played an important role in helping Ukrainians to anticipate what many in the West have missed.

In 2017, I met with a young representative of Ukraine’s National Holodomor-Genocide Museum in Kyiv. She told me, “I am a child of independent Ukraine. The Russian occupation of Crimea and the war in eastern Ukraine were so unexpected for me. But when I remembered the history of the Holodomor, I understood that Ukrainians should have foreseen this. What is now happening in Donbas and Crimea is not the end of Russian encroachments toward Ukraine. Today, the Russian president denies the fact of the Holodomor as a genocide. Actually, he denies the existence of the Ukrainian nation.”

These memories are also one of many indicators that Ukrainians will endure Russian military aggression with resolve, resistance, and a willingness to sacrifice to preserve their reclaimed heritage. A nation that emblazoned “freedom is our religion” on a multi-story billboard in central Kyiv will not easily surrender its hard-fought dignity, especially when the very idea of a Ukrainian nation was nearly destroyed during the Soviet era.

To mark the Holodomor’s eight-fifth anniversary in 2018, Ukrainian state-sponsored commercials sought to directly link the 1930s genocide with the current conflict. One advert portrayed a Ukrainian political prisoner in Russia who carves a Holodomor remembrance candle on his jail cell. Even more explicitly, a second commercial displayed Ukrainian military including the navy, aircraft, tanks, and frontline trench troops declaring: “1932-1933:  We Remember, We Are Strong.”

Many Ukrainians now argue that their hard-fought self-reliance has strengthened Ukrainian identity. One Kremlin tyrant ultimately failed to subjugate the Ukrainian nation in the first half of the twentieth century, despite enjoying much greater control over the country and demonstrating a readiness to engage in mass murder on an almost unimaginable scale.

Although the consequences of the current war are already catastrophic for the Ukrainian people and continue to escalate on a daily basis, Putin will ultimately not succeed either.

Nevertheless, Ukrainians desperately need more support from the global community. Many Ukrainians believe Western ignorance of Russia’s genocidal history in Ukraine is a leading factor slowing down the international response to today’s Russian crimes. Over the past eight years, they have repeatedly told me that the Holodomor serves as a warning for the West’s failure to take signs of Russian aggression seriously.

Today, Ukrainians are once again calling on the democratic world to prevent a Russian dictator from crushing their country. Western leaders have the opportunity to prevent one of European history’s most tragic chapters from repeating, but they must act without delay.

Image: A woman cries near a block of flats destroyed by Russian forces in the besieged southern port city of Mariupol, Ukraine. March 17, 2022. (REUTERS/Alexander Ermochenko)