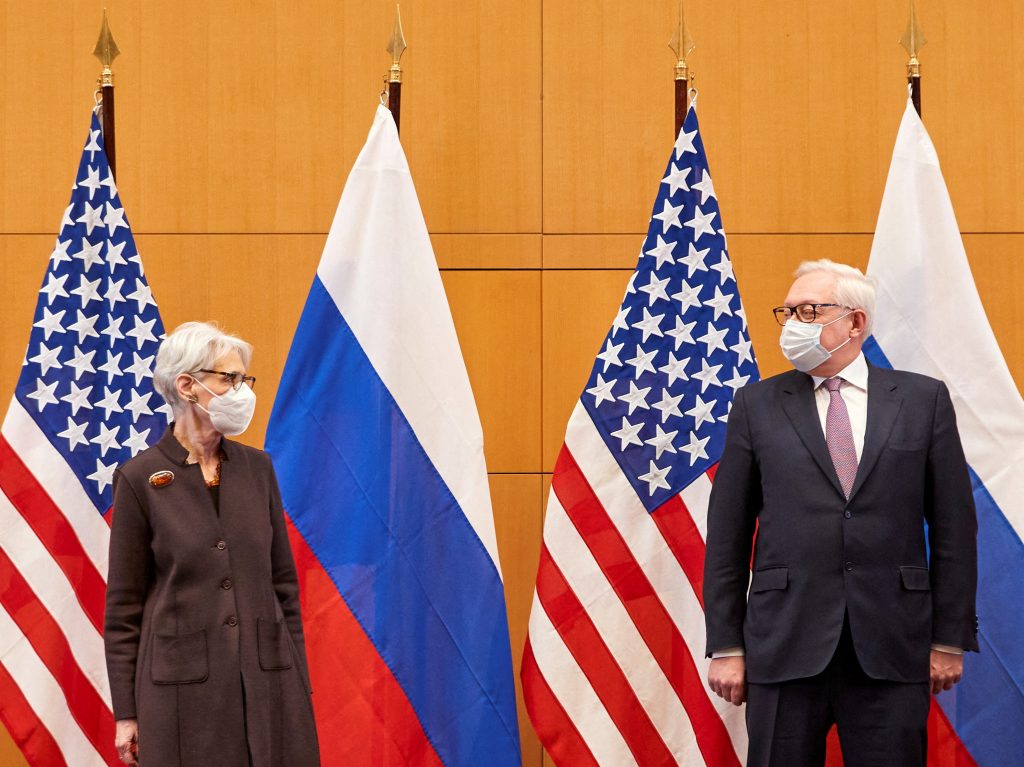 A week of high-stakes diplomatic meetings has failed to defuse tensions in Eastern Europe or reduce the threat of a full-scale Russian invasion of Ukraine. Kremlin officials sat down with their US counterparts in Geneva on Monday and held subsequent meetings with NATO and OSCE representatives to address a list of security demands issued by Moscow in December 2021 in the form of two draft agreements. The flurry of diplomatic activity ended on a pessimistic note, with Russia’s Deputy Foreign Minister Sergei Ryabkov declaring that talks had reached a “dead end” and questioning the purpose of further negotiations.

This underwhelming outcome came as no surprise. Both sides entered this week’s talks having already made clear that there was little room for compromise on key issues dominating the agenda. Russia’s main demand was for official guarantees that Ukraine would not join NATO, but this was dismissed by members of the alliance as a “non-starter” due to NATO’s longstanding commitment to an open door membership policy.

Ukraine’s relationship with NATO dominated all three rounds of negotiations, with Kremlin officials repeatedly insisting that the country’s future status remained their top priority. “For us, it’s absolutely mandatory to make sure that Ukraine never, never, ever becomes a member of NATO,” commented Ryabkov on Monday. “We are fed up with loose talk, half-promises, misinterpretation, and different forms of negotiations behind closed doors. We need ironclad, waterproof, legally binding guarantees. Not assurances, guarantees.”

With this week’s series of meetings failing to produce any significant breakthroughs, it is not clear what now lies ahead. Russia is expected to clarify its position in the coming days once officials in Moscow have digested the details of recent discussions. Russia has emphasized that it has no desire to engage in endless talks and has promised an unspecified “military-technical response” if its demands for security guarantees are not met in a timely fashion.

As the international community awaits Russia’s reaction to this week’s wholesale rejection of Putin’s security demands, all eyes will be on Ukraine. The current crisis began in November 2021 when details began to emerge of a major concentration of Russian military units in areas close to the country’s 2000km land border with Ukraine. This troop buildup has continued despite widespread international calls for deescalation and warnings that any fresh offensive would result in unprecedented sanctions measures being imposed on Russia.

Ukraine has been at the epicenter of a mounting confrontation between Russia and the West since early 2014, when Moscow responded to Ukraine’s pro-Western Euromaidan Revolution by invading and seizing control of the country’s Crimean peninsula in lightning military operation that caught the entire world by surprise. The takeover of Crimea has come to be seen as a watershed moment in modern European history and the starting point of a new Cold War.

Following the success of the Crimean campaign, Moscow attempted to orchestrate pro-Russian uprisings across southern and eastern Ukraine in a bid to partition the country and establish a new state dubbed “Novorossiya” (“New Russia”) by the Kremlin. However, these efforts were largely thwarted by unexpectedly strong local opposition, leaving Moscow in control of a comparatively small area of the Donbas region in eastern Ukraine on the border with Russia.

Fighting in eastern Ukraine reached a peak of intensity in summer 2014 before evolving into trench warfare along a static front line of around 400km. So far, the simmering conflict has claimed approximately 14,000 Ukrainian lives, with millions more displaced.

Attempts to broker a peace settlement have been hampered by Russia’s refusal to acknowledge its role in the conflict. In both Crimea and eastern Ukraine, the Kremlin has relied on hybrid military forces made up of conventional troops without identifying insignia fighting alongside mercenaries and local collaborators. Despite overwhelming evidence of Russian involvement, Moscow has maintained its policy of blanket denials.

Almost eight years since the onset of its attack on Ukraine, Moscow remains committed to forcing the country back into the Kremlin orbit. In summer 2021, Putin underlined his apparent obsession with the Ukrainian question by publishing a 5000-word essay arguing that Russians and Ukrainians are “one people” and questioning the legitimacy of Ukraine’s claims to statehood. “I am confident that true sovereignty of Ukraine is possible only in partnership with Russia,” wrote Putin.

Russia’s current saber-rattling on the Ukrainian border is the latest indication of the importance Putin attaches to preventing the country’s departure from the Russian sphere of influence. Publicly, the Kremlin leader claims to be acting in response to a mounting security threat to Russia posed by deepening cooperation between Ukraine and NATO.

However, skeptics have noted that Ukraine has virtually no chance of joining NATO for the foreseeable future and has received very little military aid from the alliance since 2014. Nor is the country geographically any closer to Moscow than the Baltic states, which have been NATO members for almost two decades.

Commentators such as former US Ambassador to Russia Michael McFaul have argued that the real issue is Ukraine’s ability to act as a catalyst for democratic change within Russia itself. “The only threat Ukraine poses to Putin is practicing democracy,” the ex-diplomat posted following this week’s fruitless meetings. “That threat will not go away with a NATO guarantee of non-expansion. So Putin will continue to undermine Ukrainian democracy and sovereignty, no matter what NATO does.”

So far, diplomacy has failed to defuse the dangerous geopolitical tensions on Europe’s eastern frontier. Moscow believes Ukraine’s Euro-Atlantic integration poses an existential threat to Russia itself and is determined to reverse this process, even if this means dramatically escalating its military campaign against the country. Putin now has a number of potential options to consider ranging from localized offensives, air strikes, and cyber attacks to a full-scale invasion of Ukraine.

Is the Russian leader bluffing or is he genuinely prepared to unleash the largest European conflict since WWII? Nobody can say for sure, but we should have a much better idea of his true intentions within the next few days.