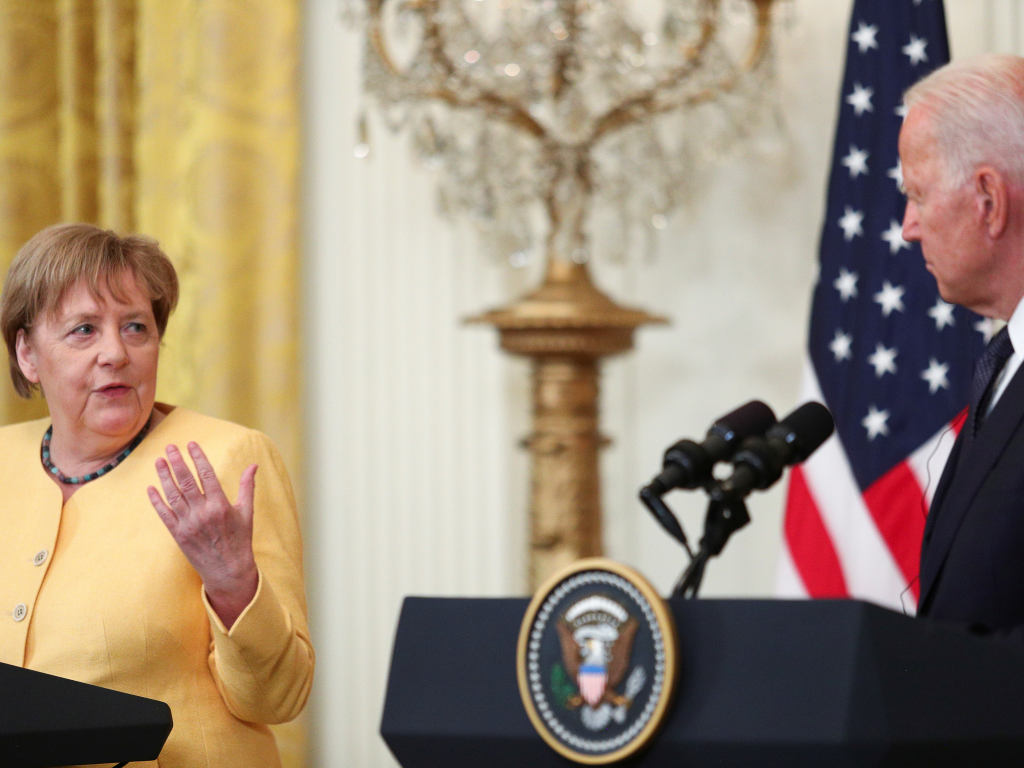 Exactly what does the White House think it’s doing?

This month, Vladimir Putin’s pet project, the $11 billion Nord Stream 2 pipeline, was approved by the White House and Germany’s Chancellery against the wishes of the European Union, NATO, the EU energy policy, the US Congress, and Germany’s neighbors. Worse, the two signed a mushy agreement to keep Russia in line and prevent it from coercing Ukraine or Europe as a result of its energy monopoly, but didn’t require Russia to sign it. In other words, the deal is unenforceable.

This shocking diplomatic development is upsetting to those of us, and neighboring nation-states, who have supported Ukraine’s efforts to finally free itself from Soviet-style corruption, and Russian oligarchs and puppets. Thousands have invested in helping Ukrainians democratize and reform their government in order to become full-fledged members of the European community. Some have died trying. I myself have lost a newspaper in the effort.

For reformers and informed Kremlin-watchers, this setback is beyond disappointing. It is downright dangerous and strangely perplexing.

The White House has ignored off-the-shelf sanctions designed to stop the pipeline’s construction. It signed this “deal” with Germany even though it is an outgoing regime, a lame-duck coalition that may be removed by election in a matter of weeks. Worse, it was signed just days after Putin issued a 6,000-word manifesto declaring that Ukraine was not a sovereign nation, but part of Russia. The document was chilling and read like a de facto declaration of war.

Tragically, getting Russia—or the United States for that matter—to agree to anything involving Ukraine’s welfare has been foolhardy. In December 1994, three nuclear powers—the Russian Federation, the United Kingdom, and the United States—signed the Budapest Memorandum which guaranteed the sanctity of the borders of Belarus, Kazakhstan, and Ukraine. Their pledge was necessary to convince the three to voluntarily surrender their nuclear weapons following the dismantling of the Soviet Union.

But in 2014, after a democratic uprising in Ukraine overthrew Putin’s corrupt puppet President Viktor Yanukovych, Russia breached Ukraine’s borders and masterminded the invasion and occupation of 7.2 percent of Ukraine. Hiding behind proxies, Putin claimed these seizures were the result of separatist uprisings by Russians who lived in Ukraine.

No one was fooled by the “little green men” and so-called “separatists,” but none of the Budapest Memorandum signatories kept their pledges by intervening. Strong words were spoken, Russia was eventually booted out of the then-G8, but Moscow remained rooted in the Security Council as well as the United Nations. By contrast, the allies promptly kicked the Soviet Union out of the League of Nations in December 1939 for its aggression against Finland as part of a pact with Germany.

Once more, the same “Grand Game” continues. Russia and Germany, enabled by a distracted and increasingly isolationist United States, trample Europe and ignore the wishes of Central and Eastern European and Baltic nation-states. Since 2014, Ukraine has borne the cost of supporting its military (second only in size to France’s) to protect the eastern wall of Europe from incursion by Putin’s mighty military. So far, 14,000 have died, 1.3 million Ukrainians were displaced by the occupation, and the country’s industrial heartland looted and ruined, at an estimated cost of $30 billion.

Once again, Ukraine, Poland, and the others cannot rely on others for protection and should form an alliance to impede the pipeline’s final completion inside Germany—through its courts, media, and political system— as well as fight fiercely in Brussels against the excessive market dominance that Russia and its pipelines now represent.

Clearly, the US State Department and National Security Council lack expertise about Russia or the extent of its malevolence in the region and beyond—a lapse that worries Europeans as well as those who live wherever else Putin is fomenting trouble such as Africa, the Americas, the Black Sea region, Central Asia, and the Middle East.

They also don’t understand that Ukraine—with its agriculture, resources, and technology, —is key to Putin’s predations. The late Russia expert Zbigniew Brzezinski best summarized its significance to Europe and the West: “With Ukraine, Russia is an empire and without it, Russia is a poor Eastern European country.”

Putin nibbles away at his prey and has all but declared war. The tragedy is that the United States and Germany have now given him a pipeline with an enormous cash flow that will finance his conquests.

Diane Francis is a senior fellow at the Atlantic Council’s Eurasia Center, editor-at-large with the National Post in Canada, a distinguished professor at Ryerson University’s Ted Rogers School of Management, and author of ten books.

Image: US President Joe Biden conducts a joint press conference with German Chancellor Angela Merkel in the East Room of the White House on Thursday, July 15, 2021. (POOL via CNP/INSTARimages)