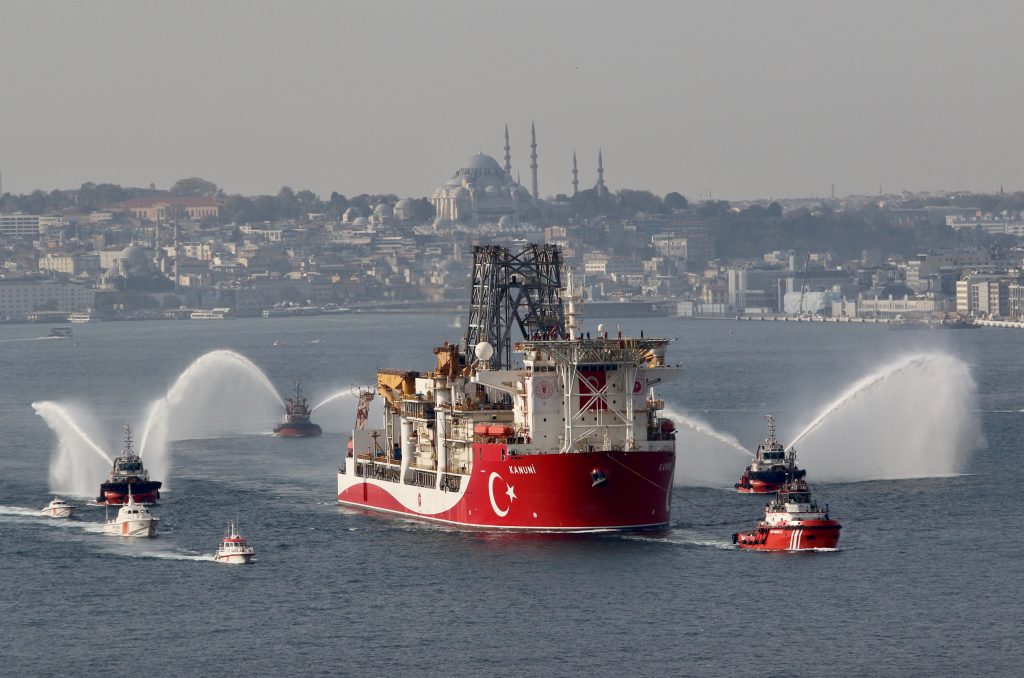 The Baltic Sea has been perceived in recent years as the maritime front line in rising tensions between the West and Russia. This has prompted NATO to develop a multi-level approach, which has led to a substantial improvement in regional security.

In contrast, the Black Sea has received much less attention. This is despite Russian military aggression in littoral would-be NATO states Ukraine and Georgia, along with construction of the TurkStream pipeline, which is designed to control the flow of Russian gas to Eastern Europe and Turkey via the Black Sea.

A recent CEPA strategy paper noted that the Black Sea region was not only a frontier between the West and Russia, but also the meeting point of four great forces: democracy in the West, Russian military aggression to the north, growing Chinese financial influence to the east, and Middle Eastern instability in the south.

To fend off rising Chinese inroads and Russian aggression, it said, the West and NATO would have to produce a multi-layered strategy. This would involve helping littoral states build strong economies while encouraging collaboration among them.

Such a vision would consolidate security on NATO’s southeastern flank. It would bring alliance members Bulgaria, Romania and Turkey closer together with NATO’s strongest partners, Georgia and Ukraine.

One element that could underpin these objectives would be the development of Black Sea gas reserves which are being explored in the offshore zones of each littoral state. These reserves could become the linchpin of an integrated regional economy.

The exact volumes of gas currently lying deep underneath the Black Sea are not yet known. Rough estimates predict that the Ukrainian shelf may contain more than two trillion cubic meters of gas. The exact figure is yet to be determined since two-thirds of the country’s maritime area passed to de facto Russian control following Moscow’s illegal annexation of Crimea in 2014. Ukraine’s state energy company Naftogaz is preparing to explore 32 remaining blocks.

Meanwhile, Turkey made international headlines in 2020 when it said reserves at its offshore Tuna-1 exploration zone may be as high as 405 billion cubic meters. Further reserves could be discovered in adjacent blocks.

To the west, Romania is thought to hold anything between 150-200 bcm of offshore reserves, being one of the most advanced littoral countries in terms of developing resources.

Bulgaria’s total reserves are unknown but just one of its as-yet unexplored fields, Khan Asparuh, is thought to contain 100 bcm. If this figure proves to be correct, these reserves alone could cover the country’s annual demand for more than 30 years.

To the east, Georgia may have overall recoverable gas resources of 266 billion cubic meters, although how much of these reserves lie in its Black Sea economic zone has yet to be determined.

In recent months, Romanian-Austrian integrated oil and gas company, OMV Petrom, which has been developing Romania’s Neptun Deep project together with US company ExxonMobil, has been seeking cooperation opportunities with neighboring countries.

In February 2021, it signed a memorandum of understanding with Naftogaz for joint gas exploration projects in Ukraine. Last summer, it increased its share in the Bulgarian Khan Asparuh project to 42.86% following the transfer of Spain Repsol’s 30% stake. The company also won a bid for exploration in Georgia’s offshore Block II.

With the exception of Turkey, all littoral states have seen their maritime industries suffer a drop in competitiveness following the fall of communism. Ukraine, for example, was previously known for its “maritime maturity,” boasting a diversified maritime economy integrating river transportation, shipbuilding, and the oil and gas industry.

Following the collapse of the Soviet Union, Ukraine struggled to rebuild its navy, while Russia’s illegal annexation of Crimea meant the country not only lost substantial offshore reserves but also lost control over Naftogaz subsidiaries operating in the region along with billions of dollars in equipment.

Similar stories of industrial decline over the last three decades can be found in Romania, Bulgaria, and Georgia.

Meanwhile, Turkey’s Black Sea maritime zone has been historically undervalued as the country has viewed it as a border region adjacent to an area of conflicting military powers, namely NATO and the Warsaw Pact.

These countries do not only share historical difficulties. They also harbor similar aspirations to consolidate and diversify their economies. It is here that the development of natural gas resources could help revitalize energy-intensive industries as well as develop new sectors such as hydrogen production which align with global emission reduction targets.

As major regional agricultural and gas producers, Romania and Ukraine have historically had developed domestic fertilizer industries. However, declining output and higher gas prices have eroded their competitiveness in recent years. Ukrainian nitrogen fertilizer production has fallen dramatically since 2014. Romania’s decline has been even steeper, with production falling close to 19% year-on-year over the same period.

However, decreasing gas prices across the world in 2020 helped Ukraine ramp up its ammonia and urea output, which are critical to the production of nitrogen fertilizers. This made it possible to more than double urea exports from the Ukrainian Black Sea port of Yuzhny from 0.7 million metric tons in 2019 to 1.5 million tons to 2020, according to energy and petrochemicals news and price publisher ICIS.

Just like neighboring Romania, Bulgaria, and Turkey, Ukraine is looking to replace outdated coal-fired power plants, which cover around 40% of their total installed capacity, with cleaner fuels.

Natural gas produced in the Black Sea could help them to transition to renewable generation in a way that would not only guarantee reliable baseload capacity, but also access cost-effective means of generation. Moreover, the Black Sea region could become an integrated hub of innovation for the development of new technologies including hydrogen produced from natural gas and renewable forms of generation.

The Black Sea’s offshore wind potential is one of the highest in Europe, with Turkey’s conservatively estimated at 11 GW, Romania’s at 94 GW, and Ukraine’s at no less than 100 GW.

This abundance of natural gas and renewable energy potential could help Black Sea countries to set up hydrogen production clusters for supplies that would help decarbonize polluting industries such as steel, cement, glass, or car manufacturing as well as increase exports to Europe. Such a vision, however, could not be achieved without an integrated market approach where natural gas or hydrogen could flow freely from the Carpathians and the Balkans to the Urals.

The region already benefits from the Trans-Balkan pipeline, the historical transit corridor for Russian gas exports to the Balkans and Turkey via Ukraine, Moldova and Romania.

Due to the expiry of most legacy contracts held by Russia’s Gazprom with local transmission operators and the diversion of flows to the newly-built TurkStream, the Trans-Balkan pipeline, which has a capacity close to 30 billion cubic meters, is now free for third-party access.

For most of its route, the pipeline runs parallel to the Black Sea coast in Ukraine, Romania, Bulgaria, and Turkey, coming close to offshore blocks in their economic zones as well as the Mihail Kogalniceanu Military Base, NATO’s air base in southern Romania.

Meanwhile, Georgia could be integrated into the wider Black Sea gas region through the existing South Caucasus Pipeline, which has been expanded to carry Caspian gas to Turkey and southern Europe.

However, in order to take advantage of the opportunities offered by abundant gas reserves and the renewable energy potential of the Black Sea, littoral countries would have to consider building a regional energy market underpinned by shared rules.

Some littoral countries such as Ukraine have made progress in terms of opening up their markets, but even Kyiv has struggled to attract high-profile investors to help explore and produce its natural gas reserves.

In Romania, ExxonMobil is looking to exit the country, deterred by political and regulatory unpredictability, while Turkey’s currency instability and lack of reform in the gas sector have discouraged investors from entering the country in recent years.

An integrated and functional gas market would not only improve the region’s chances of attracting finance, but also give it greater collective weight among global gas producers. More importantly, it would minimize the risk of conflict arising among littoral states.

Under the United Nations Convention on the Law of the Sea (UNCLOS), exclusive economic zones (EEZ) extend 200 nautical miles beyond a sovereign country’s coastline. Since UNCLOS requires states to resolve conflicts equitably without giving further legal guidance, the potential for disputes is high in the Black Sea region since its deep sea is limited in surface.

In 2009, the International Court of Justice intervened in a conflict between Romania and Ukraine over the establishment of a single maritime boundary between the two.

Russia’s unlawful annexation of Crimea could complicate matters further as the peninsula’s EEZ overlaps with what remains of Ukraine’s, as well as with those of Romania and Turkey.

As explained by the authors of a recent article on Black Sea exploration, in the absence of shared rules, and with Turkey not being a signatory to the UNCLOS, what matters is who drills first.

This could leave room for conflict in the wider Black Sea region and create vulnerabilities for NATO and its partners, which Russia or China would be only too keen to exploit.