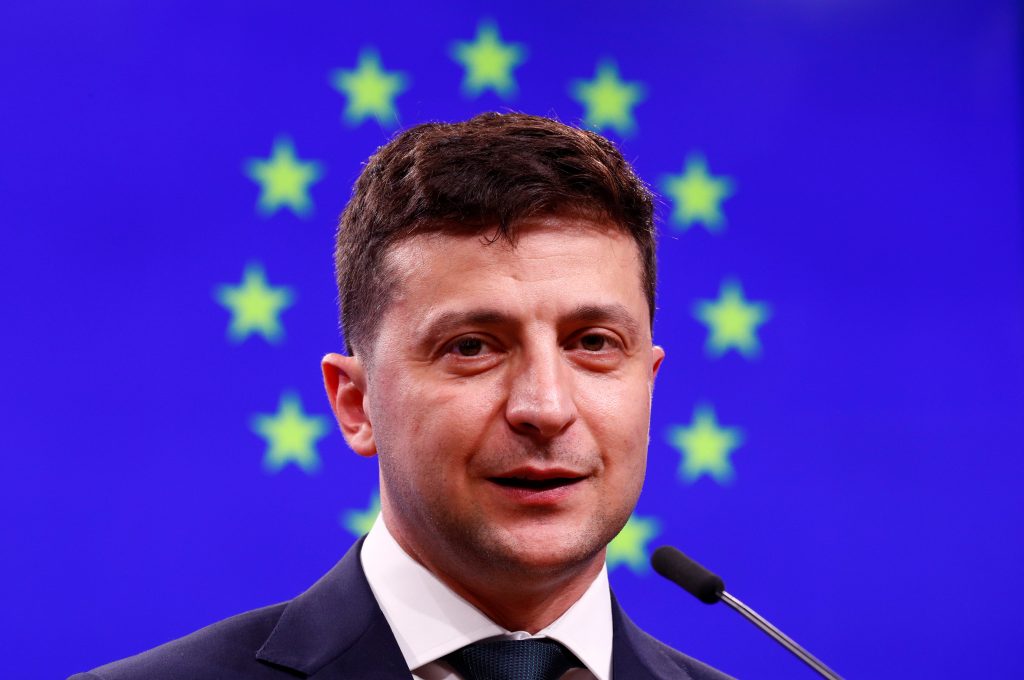 When news broke last week that former Ukrainian President Petro Poroshenko would face criminal charges over alleged abuse of office, most observers saw it as the latest development in a political zendetta being waged against Poroshenko by his successor Volodymyr Zelenskyy. The current Ukrainian president’s apparent eagerness to target the man he replaced is no secret in Kyiv. Indeed, when Zelenskyy’s first prosecutor general Ruslan Ryaboshapka was ousted from his position in March 2020, he cited his refusal to sign off on flimsy charges against Poroshenko as a key reason behind his dismissal.

Zelenskyy’s antipathy towards Poroshenko dates back at least as far as the 2019 presidential campaign and does not appear to have been tempered by his landslide victory in last year’s vote. Nevertheless, as the Zelenskyy presidency enters its second year, Ukraine’s new head of state seems to have recognized that he cannot change the foreign policy course of Euro-Atlantic integration established by Poroshenko. Despite his many public criticisms of his predecessor, Zelenskyy has come to appreciate over the past twelve months that Ukraine has no viable geopolitical options other than a continuation along the path towards closer ties with the Western world.

Ever since the country first gained independence in 1991, every single Ukrainian leader has traditionally paid lip service to the idea of Euro-Atlantic integration. However, these integration ambitions did not become the genuine driving force behind Ukrainian foreign policy until after the 2013-14 Euromaidan Revolution. A landmark Association Agreement with the European Union was signed in summer 2014, visa-free EU access came in 2017, and the country’s westwards pivot was officially confirmed as state policy in February 2019 when Ukraine’s EU and NATO membership ambitions were enshrined in the Ukrainian Constitution.

Prior to his election as president, Zelenskyy repeatedly offered assurances that if elected, he would not seek to alter Ukraine’s Euro-Atlantic geopolitical trajectory. Even so, numerous statements on the campaign trail set alarm bells ringing. While running for the presidency, Zelenskyy questioned whether the Western world welcomed Ukraine’s integration ambitions and spoke of the the necessity of a referendum on NATO membership. He also raised the prospect of new approaches towards peace talks with the Kremlin that focused on bilateral dialogue rather than the international negotiating frameworks established during the previous five years together with Ukraine’s Western partners. None of this represented a complete rejection of Ukraine’s historic turn towards the West, but it was enough to fuel speculation over a potential return to the geopolitical no man’s land of the early post-Soviet period.

The biggest litmus test for Zelenskyy’s foreign policy over the past year has been the search for a lasting peace with Russia, and it is here that the inevitability of Ukraine’s further Western integration has become most immediately apparent. While on the campaign trail in early 2019, Zelenskyy and his team had been notably upbeat about the prospects of ending the war. Candidate Zelenskyy’s comments on the peace process indicated a belief that the five-year conflict could be resolved by speaking with Putin man to man and reasoning with the Russian leader.

The first blow to this approach came in the immediate aftermath of Zelenskyy’s election victory, when the Kremlin announced plans to dramatically escalate the distribution of Russian passports to the residents of Russian-occupied eastern Ukraine. Moscow was clearly not interested in taking advantage of the transition in order to change the tone of the bilateral relationship.

Unwilling to admit defeat, Zelenskyy spent the second half of 2019 making a series of compromises and concessions in order to secure a prized face-to-face meeting with Putin. When this much-hyped summit finally took place in Paris in early December 2019, it proved to be an anti-climax. There was no anticipated breakthrough towards peace. Nor was there any indication that the Russian leader shared Zelenskyy’s desire to end the undeclared war between the two countries. Instead, the meeting merely served to confirm the bloody stalement that has been in place ever since the signing of the second Minsk Agreement in February 2015.

There have been no further summits over the past six months. Officially, the coronavirus pandemic has been blamed for scuppering a planned April meeting of the Normandy Format leaders. In reality, there is little appetite in either Kyiv or Moscow for another fruitless gathering.

Following what has been a frustrating year on the foreign policy front, Zelenskyy now appears to have accepted that his initial enthusiasm for behind-the-scenes diplomacy, informal meetings, and bilateral dialogue will not produce the desired result of ending the war. Instead, there can be no way out of the crisis without Western partners, international sanctions, and systematic pressure on Russia.

Blaming Poroshenko for the continuation of the war may have been politically convenient during last year’s election campaign, but Zelenskyy’s own subsequent experience has forced him to accept that Putin is the driving force behind the conflict. This has led to growing recognition that Ukraine’s only hope lies in closer cooperation with the country’s Western partners.

The realities of the confrontation with Russia have been crucial in convincing Zelenskyy to maintain Ukraine’s Euro-Atlantic trajectory, but the country’s economic plight has also played an important role in underlining the need for deeper cooperation with the Western world. With an economic crisis looming due to policy failures and the impact of the coronavirus pandemic, Zelenskyy has had little choice in recent months but to negotiate with the International Monetary Fund. This conservative approach was at odds with Zelenskyy’s populist instincts, but it opened the door to a USD 5 billion IMF stamp of approval that is likely to prove vital in the challenging months ahead.

While economic and security considerations have combined to prevent any major deviations from Ukraine’s Euro-Atlantic direction, the pace of integration has lessened considerably since the change in Ukraine’s leadership. Beyond cheap one-liners such as Zelenskyy’s suggestion at this year’s World Economic Forum in Davos that Ukraine take over Brexit Britain’s European Union membership, the past twelve months have been a period of relative stagnation. The only significant integration progress has been NATO’s recent decision to grant Ukraine Enhanced Opportunities Partner status.

Despite the relative lack of recent progress, a sharp reversal of Ukraine’s geopolitical direction looks unlikely. As well as the abovementioned security and economic factors, public opinion in Ukraine also remains firmly set on Euro-Atlantic integration, with polls consistently producing results that would translate into landslide referendum victories in favor of EU and NATO membership.

Nonetheless, the danger remains that the current lack of integration momentum could leave Ukraine lagging behind and increase the country’s vulnerability to Russian hybrid aggression. This makes it more important than ever for Ukraine’s partners to provide robust support for the reform agenda while offering as clear an understanding as possible of Ukraine’s future integration prospects.

Despite a year of dramatic political changes in the country, the fundamentals of Ukraine’s Euro-Atlantic integration ambitions have remained broadly unchanged. The country’s Western choice, which was first announced during the Euromaidan Revolution then confirmed by six years of undeclared war with Russia, is set to determine Ukraine’s geopolitical fate for years to come. President Zelenskyy may not be a fan of his predecessor Petro Poroshenko, but he looks destined to follow in his foreign policy footsteps.