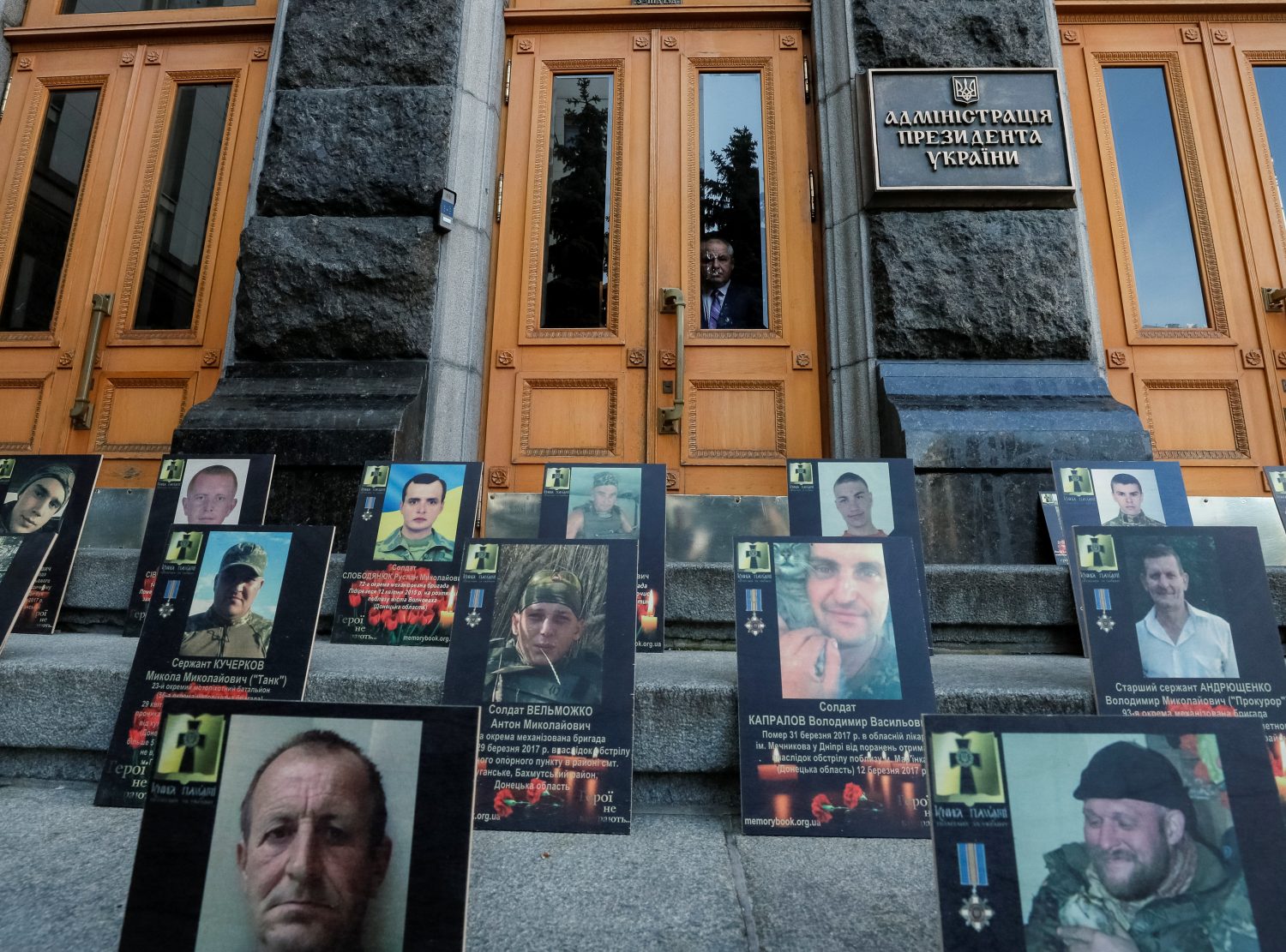 Portraits of servicemen, killed in eastern Ukraine, are seen during a protest against a peace deal with Russia, in front of the Presidential Administration building in Kyiv, Ukraine May 23, 2019. Credit: REUTERS/Gleb Garanich

The first 100 days of Volodymyr Zelenskyy’s presidency have come and gone. In this short period, the new president and his team have already accomplished several of their big campaign promises from stripping the parliament of immunity to adopting a law on the impeachment of the president. Moreover, for the first time in Ukraine’s recent history, young, Western-educated technocrats make up a new Cabinet of Ministers. Despite enormous enthusiasm along with a strong readiness to fix things, many challenges lie ahead for Zelenskyy and his Servant of the People party. But the most serious one undoubtedly comes from Moscow.

The recent exchange of prisoners that took place between Kyiv and the Kremlin is one of the first and important steps toward pushing forward on a stalled ceasefire agreement. Zelenskyy has already announced his plans to meet in Paris with the heads of state from Russia, France, and Germany this month, and since the prisoner exchange, he’s come under heavy international pressure to compromise.

Ukrainians themselves want a real ceasefire as well. More than 70 percent said a ceasefire agreement should be a top priority for the new president. However, Zelenskyy has limited negotiating space in Paris. According to the Ilko Kucheriv Democratic Initiatives Foundation, only 17 percent of Ukrainians support the restoration of Ukrainian sovereignty through a military approach, while 49 percent among those polled agreed they want peace and are willing to accept some compromise but not everything Russia wants.

Sixty-six percent of Ukrainians oppose elections being held in the self-proclaimed DNR-LNR republics. Only 13 percent are OK with elections. 61 percent among those polled don’t support amnesty being given to separatists who took up weapons against the regular Ukrainian army, and only 15 percent support it. Organizing local militias in the so-called DNR-LNR is disapproved by 58 percent among those polled. In the meantime, 54 percent disagreed with granting official status to Russian as a second language in these regions. A majority of those polled (55.5 percent) support sending an international peacekeeping mission to the Donbas.

The poll clearly shows that most Ukrainians are unwilling to reconcile at any expense, which complicates the new president’s job. Zelenskyy built his campaign in large measure on the promise of bringing peace to the east.

On the other hand, some of these controversial items were part of the Minsk 2 ceasefire agreement. In the document, Ukraine agreed to grant amnesty to separatists who didn’t commit serious crimes and provide official status to the Russian language in the Luhansk and Donetsk regions after organized local elections under the eye of international observers were held. However, certain passages of the ceasefire agreement are politically unacceptable to society.

What’s the way out of the impasse?

The Kremlin wants Ukraine to amend its Constitution to provide “special status” to the DNR-LNR republics which would pave the way for local elections. Moscow claims it will withdraw its military forces, shifting the control over the Russian border to the Ukrainian side.

In the meantime, the main questions are yet to be answered, including in which order the declared provisions must be adopted by each side. Who shall determine the guilt of the separatists and what should be done with the thousands of them who will refuse to give up their weapons even if the Kremlin forces them to do so?

Unlike his predecessors, Zelenskyy’s party enjoys a majority in parliament and can pass virtually any bill. However, Zelenskyy needs to tread lightly. Trying to pass a special status bill would likely enrage the street, including those who lost their relatives and friends in this conflict.

When MPs tried to adopt some of the provisions of Minsk 2 in 2015, one of the veterans from the “Karpatska Syich” volunteer battalion threw a grenade in a gathered crowd which killed four servicemen and injured dozens. The reaction might be even more violent this time.

On Ukraine’s Independence Day, August 24, thousands of Ukrainians took to the street to organize an “alternative parade” which included thousands of veterans, their families, and friends to convey their disagreement with the authority’s decision to cancel the official military parade on Kyiv’s main boulevard. Without a doubt, most of those who participated oppose granting “special status” to the Donbas and they will boldly resist any efforts to give amnesty to the separatists until at least the Kremlin pulls out its military presence in the Donbas.

At this point, Zelenskyy needs to summon all of his acting experience and persuasive powers to convince Ukrainians, including those who didn’t vote for him, to take painful steps in order to bring peace to their country. In this case, his willingness to sacrifice his power if needed may serve as his strongest argument.