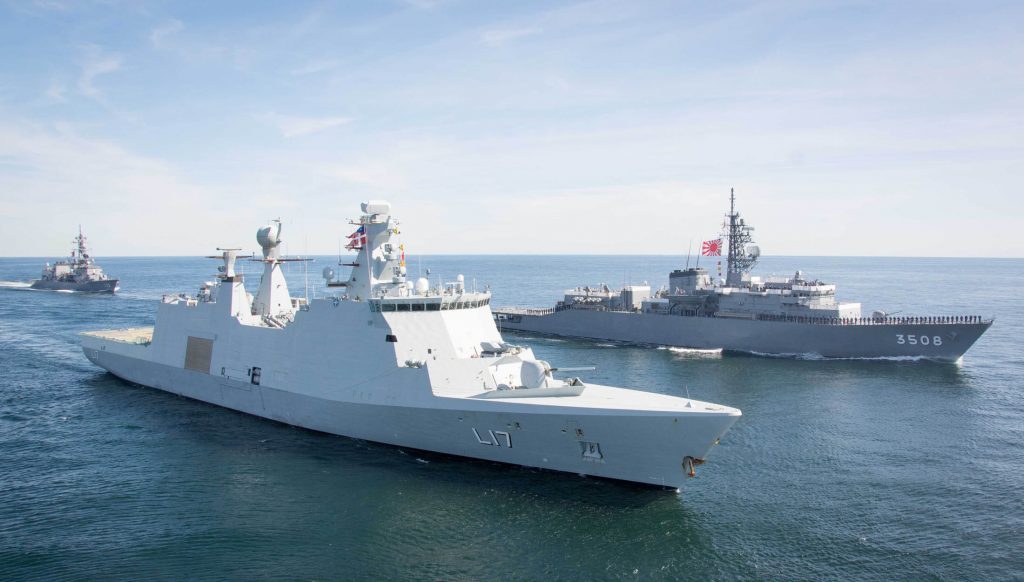 On March 24, 2021, the Atlantic Council’s Asia Security Initiative, housed within the Scowcroft Center for Strategy and Security, hosted a virtual public conference on the future of the bilateral US-Japan alliance and multilateral cooperation in the Indo-Pacific under the Biden and Suga administrations.

The conference opened with remarks H.E. Koji Tomita, Ambassador of Japan to the United States, following an introduction by Mr. Frederick Kempe, Atlantic Council President and CEO. In his remarks, Ambassador Tomita noted the timeliness of the conference as the US-Japan alliance moves into a “new phase,” and he emphasized that Japan is “very eager to work with the new administration, fleshing out the concrete substance to our partnership in the coming weeks and months.” Noting that Prime Minister Suga was planning a meeting with President Biden in Washington, DC (since confirmed for April 16), Ambassador Tomita underscored the importance of public discussions in enhancing US-Japan mutual understanding and cooperation moving forward.

Session one: the bilateral alliance under Biden and Suga

The first session focused on the future of the bilateral US-Japan alliance and featured Mr. Marc Knapper, US Deputy Assistant Secretary of State for Korea and Japan, Dr. Toshihiro Nakayama, professor of American politics and foreign policy at Keio University, Dr. Sheila Smith, senior fellow for Japan Studies at the Council on Foreign Relations. Atlantic Council senior vice president and director of the Scowcroft Center for Strategy and Security, Mr. Barry Pavel moderated the discussion.

Pavel opened the first session by asking the panelists for their reactions to the Biden administration’s first major diplomatic initiatives in the Indo-Pacific, including back-to-back “two-plus-two” meetings with US allies South Korea and Japan, as well as the tense high-level meeting with China’s top diplomats in Anchorage, Alaska. Knapper called the trip by Secretaries Blinken and Austin a “historic, momentous trip to the region” that succeeded in communicating to regional partners that “diplomacy and alliances are back at the center of foreign policy and security policy” for the Biden administration. The meeting in Tokyo was particularly fruitful, Knapper said, because the US and Japan see “eye to eye” on issues ranging from the rise of China and North Korea to global health, supply chains, and the erosion of shared values around the world.

Echoing Knapper, Smith called the Asia trip a symbol of “reassurance about the Biden administration’s value of our partners in the region.” For Smith, rather than a “G2 moment or a China-first moment,” the meetings demonstrated that the United States will develop a “constructive and integrated agenda with allies, where the leverage of the region and for interacting with China will be shared.” She went on to note that cooperation should not be limited to the security sphere, citing China’s economic coercion against Australia as an example of an area where resilience against collective vulnerability will be critical.

Similarly, Nakayama stated that concerns in Japan over Biden’s Asia policy “totally evaporated” with the Quad meeting and the 2 + 2 meeting”, and he expressed hopes that Prime Minister Suga’s upcoming trip to Washington will further dispel any uncertainties Tokyo had. Nakayama also noted that the Biden team was “sophisticated and nuanced in their approach to China.” The goal is not to confront China, but to “surround China with the kinds of desirable norms and order that we prefer with our allies and partners,” he said. However, Nakayama pointed to the remaining differences among US allies toward China highlighting that the joint statement from US-Japan 2+2 meeting framed China as a threat in a much more pronounced way compared to the statement released by Washington and Seoul.

In response to Pavel’s question on the how the meeting between US and Chinese officials in Anchorage affects Japan, Smith warned that China may amplify pressures on individual members of the Quad to weaken the grouping, whether it be through public messaging or economic coercion. In recognition of this possibility, Smith suggested that the Biden administration will take its time to develop an approach to China that emphasizes deep consultations with US allies and partners in the region. Rather than rolling out a single China strategy in one go, Smith expects that the various “China [related] pieces will be woven throughout our strategic thought process.”

Nakayama, on the other hand, argued that the Anchorage meeting was a “clear message that China has hegemonic ambitions” — a message that has strengthened as a result of the US management of the COVID-19 pandemic. While Nakayama commended the Biden administration for its “sophisticated, well-coordinated China policy,” he warned at the same time that increased sophistication often comes with increased difficulty in execution. Successful execution of a nuanced China policy will require the US to clearly communicate its top priorities in the region, Nakayama said.

Remaining challenges for the US-Japan alliance

With the Suga-Biden summit in Washington scheduled to take place on April 16, Pavel polled the panelists about key issues for the alliance moving forward. Knapper identified climate change, global health and vaccine distribution, supply chain resilience, and clean energy as areas in which the alliance can deepen cooperation. Smith noted that the alliance must rethink economic cooperation given the previous US administration’s unilateral use of tariffs as an instrument of foreign policy.

Regarding trilateral cooperation among the United States, Japan, and South Korea, Knapper argued that the three countries should consider cooperation not just on shared regional security concerns, but also on a broader range of issues where values align, such as development aid to Southeast Asia, counterpiracy in the Indian Ocean, infrastructure in Africa, promoting women’s empowerment, and engaging in the peace process in Afghanistan.

Finally, all panelists discussed the relevance of Taiwan for the US-Japan alliance. Knapper highlighted that the inclusion of language on Taiwan in the US-Japan 2+2 joint statement was “organic” and “natural”, reflecting a “consonance in views.”  Smith also projected Japan will take more of a “forthright role” regarding Taiwan moving forward. On the other hand, Nakayama pointed out that the “alliance is not well prepared for contingencies in the straits” at present.

Explore other Japan content from the Asia Security Initiative

Emerging technologies and the future of US-Japan defense collaboration

This report explores the drivers, tensions, and constraints shaping US-Japan collaboration on emerging defense technologies while providing concrete recommendations for the US-Japan alliance.

Opportunity knocks for NATO and its partners in the Asia-Pacific

Although NATO and its Asia-Pacific partners have developed their relations over the past two decades, various constraints have limited the ambition and potential of these relationships. But there may be a change of the status quo on the horizon.

The second session focused on the multilateral cooperation in the Indo-Pacific, particularly under the Quad. It featured Ms. Lisa Curtis, senior fellow and director of the Indo-Pacific Security Program at the Center for a New American Security, Dr. Jagannath Panda, research fellow and coordinator of the East Asia Centre at the Manohar Parrikar Institute for Defence Studies and Analyses, Mr. Ashley Townshend, director of Foreign Policy and Defense at the United States Studies Centre, and Ms. Yuki Tatsumi, senior fellow and co-director of the Stimson Center’s East Asia Program. Dr. Miyeon Oh, director and senior fellow of the Asia Security Initiative, moderated the discussion.

Oh opened the second panel discussion by asking the panelists to assess the first-ever Quad summit meeting. Curtis noted that it was a “remarkable” feat for the Biden administration to hold the summit and produce a joint statement within sixty days of taking office. Citing the Quad members’ initiative to produce and distribute Covid-19 vaccines throughout the region, the meeting demonstrated that the Quad can “pool together its resources and capabilities to do positive things for the region,” Curtis said. Townsend agreed, stating that the Quad’s practical focus on climate change, health, and technology prioritizes “the region’s immediate needs ahead of everything else.”

Townshend also suggested that the summit meeting may signal the growing role of regional actors, saying that reliance on the shared capabilities of multiple powers, rather than US capabilities alone, “could be the norm in the future.” Echoing this, both Tatsumi and Panda viewed the Quad as a potential force multiplier in the region. Noting that Prime Minister Suga does not see Quad cooperation as mutually exclusive with other regional arrangements such as ASEAN and the East Asia Forum, Tatsumi said the Quad can serve as a “foundation through which the US, Japan, Australia, and India reach out to other countries that share concerns and interests.” For Panda, the summit also demonstrated a “strong step towards the institutionalization of the Quad,” particularly as an issue-oriented grouping whose scope extends beyond security concerns.

Quad as a platform to promote democracy

Asked by Oh whether the Quad could serve as a framework to promote democracy, the panelists offered various insights on how the grouping could mobilize their shared values. Emphasizing that the promotion of democracy is one of the “driving forces” uniting the Quad members, Curtis identified technological cooperation as an avenue to further this aim. “It’s important that the Quad leads the way in promoting technological cooperation so that the trends move in the direction of techno-democratic development,” she said as she pointed to the need to curb China’s surveillance technology exports.

Tatsumi zeroed in on the issue of human rights. Given that the joint statement from the 2+2 talks in Tokyo explicitly mentioned human rights for the first time in the context of China’s behavior in Xinjiang and Hong Kong, Tatsumi projected that Japan may become more “forward leaning” on human rights issues. As a result, the Quad could be a venue for Japan to “coordinate its [human right] approaches with partners and complement each other,” she said.

Panda argued that influence operations, including “non-coercive operations,” must be discussed within the Quad when building democratic synergy. The Quad could play a pivotal role in preventing semi-democratic countries in Southeast Asia from slipping into authoritarianism, he noted.

The panel concluded with a discussion on how the Quad could operationalize the agenda laid out in the joint statement. Townshend argued that in order to make the Quad a credible provider of deterrence in the Indo-Pacific, “policy steps need to be accelerated first at the bi- and trilateral levels” on interoperability and technical coordination. Curtis agreed, acknowledging that each bilateral or trilateral security relationship within the Quad is at a different stage. In particular, providing maritime domain awareness will require the pooling of resources and increased exchanges of information, Curtis said.

Additionally, Curtis spoke of the need to view the Quad as an inclusive organization. Quad Plus cooperation in the early stages of the Covid-19 pandemic demonstrated the potential for consultation on an issue-by-issue basis with outside partners, Curtis explained. “This should continue, and it gives other countries the choice of how they want to be involved with the Quad.” Tatsumi argued that NATO allies including France, Germany, and the United Kingdom are “natural partners” for the Quad given their participation in freedom of navigation operations in the South China Sea. South Korea’s participation in the Quad would be welcomed, she said but the ultimate decision depends largely on whether Seoul has space for cooperation on issues outside reconciliation and reunification with North Korea.

Heralding the leadership summit as a “new beginning,” Panda argued that the Quad must “capitalize on issues that are urgent for the region.” Both Tatsumi and Townshend suggested the Quad cooperate on establishing standards for new and emerging technologies. Curtis and Panda both underscored the importance of climate change, vaccinations, technology, and economic development.

The Asia Security Initiative, housed within the Scowcroft Center for Strategy and Security, fosters a trans-Atlantic-Pacific Community with a dual analytical approach grounded in key traditional and non-traditional security issues in order to develop new strategies and policies for the United States, its allies, and its partners.