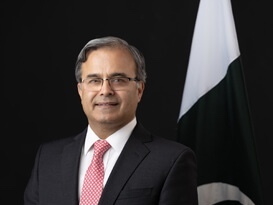 Ambassador Munter set the stage by discussing how far the US-Pakistan relationship has come, reflecting on his personal experience as US Ambassador to Pakistan during a time where he stated, “we weren’t playing our strong suits, we weren’t working on the things we’re best at, which is Pakistan and American affinity for one another, and Pakistan and American economic possibilities. No, it was all counterterrorism and the misunderstandings at that time… As many people who follow Pakistan see there’s an attempt to have a new approach… and to focus on what many call a geoeconomic focus in the future… This dovetails neatly with some of the approaches of the new American administration.”

Following Ambassador Munter, H.E. Dr. Asad Majeed Khan offered an overview of US-Pakistan relations over the years by highlighting the gains and transformation of the country by stating, “Talking about the future, it is important to understand what the new and transformed Pakistan is like.  A Pakistan that is principally invested in achieving economic security. A Pakistan that wishes to harness its geographic potential in the service of promoting its economic interests. A Pakistan that sees its hard security as an extension of its economic security, and a Pakistan that is ready to invest in peace and engagement in the region.” Throughout the remainder of his introductory remarks, Ambassador Khan cited the importance of the US-Pakistan bilateral relationship as a stand alone relationship and highlighted Afghanistan as an area of convergence in the US-Pakistan relationship. Ending his remarks by saying, “We see a bright future for our relationship because we have all that it takes to have a strong partnership with the United States.”

Ensuing Ambassador Khan’s introductory remarks, Ms. Ghori-Ahmad began the fireside-chat discussion by asking H.E. Dr. Asad Majeed Khan about the recent declaration of a ceasefire on the Line of Control between India and Pakistan and whether or not he thought it would result in real progress for peace. The Ambassador responded by pinpointing the Line of Control as a starting point of contact between the two countries and reaffirmed that Pakistan has and continues to be committed to peace.

Ms. Ghori-Ahmad then turned the conversation to Afghanistan and asked the Ambassador whether or not he thought the pathways described in a leaked letter from US Secretary of State Blinken to Afghan President Ashraf Ghani was an effective approach to the peace process in Afghanistan.  While the Ambassador was not in a position to comment on the matter, he used the opportunity to address the progress that has been made in the negotiations that many would not have imagined being possible years ago. The Ambassador also highlighted the necessary component of the regional approach to support the peace process citing the “shared responsibility” of countries to secure peace in Afghanistan.

In her next two questions, Ms. Ghori-Ahmad pivoted the discussion to economic diplomacy and China- asking the Ambassador what investments the Pakistani government is putting forward to attract US investors, and how Pakistan can navigate its close ties to China while also having a desire to strengthen its relationship with the US.  The Ambassador outlined Pakistan’s growing middle class with a median age of 23.9 years old who are eager for new products as well as specific incentives in the agriculture and tourism sectors. The Ambassador also noted that Pakistani leadership is engaged in interacting with US businesses in Pakistan to address challenges they face. When discussing the Chinese Pakistan Economic Corridor (CPEC) the Ambassador dispelled the misconception that Pakistan is only open to China for investments,  adding that US investors are welcome to bid on CPEC projects in the special economic zones and “should take part in these investment ventures”. Addressing geopolitics, the Ambassador emphasized Pakistan’s belief that “South Asia should be an arena for cooperation rather than confrontation”.

Throughout the remainder of the discussion Ms. Ghori-Ahmad and H.E. Dr. Asad Majeed Khan discussed audience questions on important topics ranging from: how Pakistan fits into the US Indo-pacific strategy, to climate change, and the role of the US in reducing tensions and increasing cooperation between Pakistan and India. When asked what three specific areas of the US-Pakistan bilateral relationship he would like to change in a positive way under the Biden Administration, the Ambassador called attention to further exploring the business and economic relationship between the countries. Stating, “I remember the then President saying that he would like to see our business and economic relationship to grow by 20 times. I would really like to realize that and make that happen.” Secondly, the ambassador underscored the importance of expanding educational and scientific cooperation, stating, “it is one of the areas where our potential is really underexplored.”  Finally, he advised working on technology and agriculture, tapping into the successful Pakistani diaspora in the US. Ms. Ghori-Ahmad didn’t shy away from difficult topics as she asked the Ambassador about the democratic status of Pakistan as “Not free”, challenging his earlier assertion that Pakistan is a vibrant thriving democracy and his view on organizations like Freedom House. The Ambassador talked about the gains in Pakistan showcasing peaceful transitions of power, media’s role as a watchdog and an active civil society stating “while we may not still be there, please don’t compare us to Britain or the United States.” Asserting Pakistan’s status relevant to the region.

In conclusion Ms.Ghori-Ahmad thanked H.E. Dr. Asad Majeed Khan, Ambassador Munter and everyone who contributed to make the event possible. The event highlighted the many opportunities that exist to strengthen the US-Pakistan bilateral relationship many of which will be continually addressed in the South Asia Center’s Pakistan Initiative.

The future of US-Pakistan relations with H.E. Ambassador Asad Khan

Against the backdrop of longstanding regional tensions within South Asia, the international COVID-19 economic slowdown, the United States’ evolving role in the world, and the ongoing peace process in Afghanistan, US-Pakistan relations stand at a crossroads.