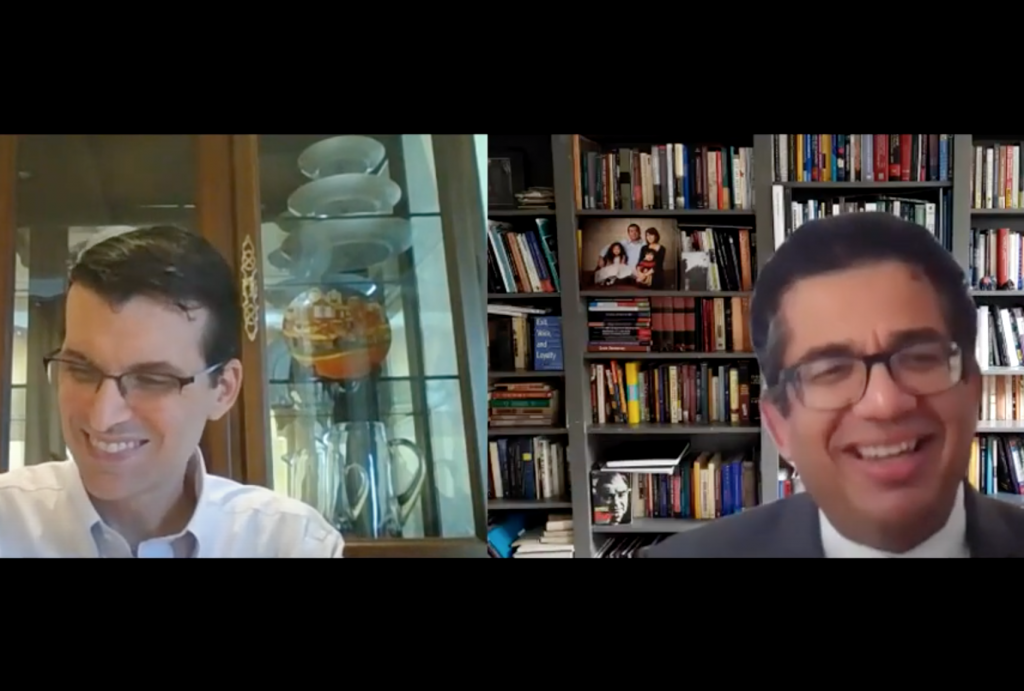 On September 3, 2020, the US Embassy in Delhi hosted a webinar about the effects of COVID-19 on the regional economies of South Asia, featuring Dr Irfan Nooruddin, director of the Atlantic Council’s South Asia Center. Mr. Thomas Carnegie moderated the discussion and began by introducing Dr Nooruddin, who contextualized the discussion with three key points that he argued are crucial to understanding the economic effects of COVID-19 on South Asia. He also noted that, while much of the discussion will center on India, it is by no means an implicit disregard for the other countries in South Asia – Dr Nooruddin explained that analyzing India is crucial for understanding the region as a whole.

First, he argued that understanding COVID-19 in the context of the economy does not necessarily mean that we should think of it in a new way. Instead, we should use COVID-19 as a giant microscope through which we examine the weaknesses of South Asian economies that have always been there, but are now more pronounced as a result of the pandemic. People who were already living on the line of subsistence were always vulnerable in the South Asian economies constructed over the past 20 years. COVID-19 only exploited these already marginalized segments of society, thus forcing the world to face what has always been problematic and has always existed. The question then must not only be about the post-pandemic world, but a direct and substantial effort towards understanding the most vulnerable people in society and the structural inequalities that they represent. South Asia is just now learning what it means now to have such a large segment of the economy in the informal sector and thus particularly vulnerable to a crisis such as COVID-19. In a crisis moment, these are the people most at risk, and many of them have lost their livelihoods as a result.

Second, Dr Nooruddin touched on the idea of entitlements, citing Amartya Sen, one of India’s most famous economists. Sen wanted to thoroughly understand famines and stated that India never had a great famine, because a famine is a lack of entitlements, not a lack of food – that is, people are unable to afford food, even if it exists in abundance. The COVID-19 lockdowns that governments imposed meant that, overnight, people lost their source of income and thus lost their ability to exercise their entitlements. For many of us in the United States and elsewhere, we have savings, families, jobs, and social safety nets. We can make this work, but for hundreds of millions of people in South Asia, this is not the case. Dr Nooruddin stressed the need for a better entitlement system, such as through wider usage of ration cards. This, he argued, tells us that the most useful level of government for dealing with COVID-19 is local and state governments. As it sits, the central government collects taxes and the state governments spend them – but the state governments are now bankrupt. They then rely more heavily on the center, but the center is also bankrupt, resulting in a brewing conflict over government financial resources. This is the reality, argued Dr Nooruddin – as a result of these dynamics, the states don’t have resources to spend, and the citizens who rely on state services become the ones who suffer.

Third, Dr Nooruddin stressed the importance of trade, stating that the global trade network developed over the past 30 years is shutting down. Countries are trying to protect themselves and their people with moderate isolationism, and this is understandable. That said, South Asian countries have little to no intra-regional trading. This is in contrast to other great trading partners (the United states, Europe, etc) who all have intra-regional trade zones. India and Pakistan’s conflict severely impedes regional trade, argued Dr Nooruddin. What is South Asia missing out on? What does it mean that India’s trade can’t get to Central Asia by land because it would mean going through Pakistan? Eventually, ports and airplanes will resume operations; will South Asia’s countries have invested in an economy that allows it to take advantage of these opportunities? Additionally, Dr Nooruddin expressed concern about assessing a national economy by the health of its stock market – he argued that this is dangerous because the stock market is not representative of the whole economy. It may be a useful indicator among many, but most people are not invested in the stock market, and the companies involved in those stock exchanges are not small and medium enterprises (SMEs) that are the backbone of the economy and the middle class.

The discussion then moved on to a Q&A session with the audience. Asked about the long-term outlook of major urban to rural migration at the beginning of the pandemic, Dr Nooruddin explained that rural-urban migration has always been seasonal, and that it is just much more visible now. That said, he stated that April saw one of the largest mass migrations in recent memory. Many have returned to village economies that cannot employ so many people and rely on remittances coming from cities that are now reduced or cut off. He also stressed the disproportionate impact of all these factors on women and girls in terms of access to education.

Asked about state economies looking inward for employment, Dr Nooruddin argued for prudence in usage of the word “inward.” We want to create local businesses that are better able to take advantage of opportunities and trade, he argued. Investment in national connectivity and infrastructure is good for the economy. Dr Nooruddin explained, however, that this needs to be paired with the idea that we cannot shut out businesses from the international community that will also benefit local people and the economy. India is not better off barring companies like Amazon and Walmart from competing in the Indian market.

Responding to a question about domestic infrastructure, Dr Nooruddin asserted that, while technology has mitigated the worst of the impact on education for many thanks to the internet, it isn’t the same as being in a classroom, and we should be grateful for having access to technology. Lots of families may not have stable internet and schools don’t always have teachers who are able to easily adjust to online classes. In a critical formative part of their lives, many students are going to be scarred – the emotional and mental toll on young people is not something that we can fathom quite yet.

Overall, the webinar stressed the importance of short-term responses to COVID-19 as well as the need to understand deep, longer-term effects that will take months and years to play out. State and local governments throughout South Asia can and should lead the charge in safeguarding the livelihoods of their constituents and, among them, take special care to protect society’s most vulnerable and marginalized groups. Only then can South Asia emerge from COVID-19 with a more robust and equitable economy than before.

An inside look at Pakistan’s COVID-19 response

ONLINE EVENT- A discussion on Khyber Pakhtunkhwa’s response to COVID-19 and the economic repercussions of the pandemic on Pakistan featuring Pakistani politician and current Provincial Minister of Khyber Pakhtunkhwa for Finance and Health Taimur Khan Jhagra and South Asia Center’s Uzair Younus.

Surveying opinions from rural India on the COVID-19 lockdown

India is now several week into the government-mandated lockdown intended to control the spread of COVID-19. Led by Non-Resident Senior Fellow Dr Edmond Fernandes, the CHD Group and the Atlantic Council’s South Asia Center surveyed Indian citizens in rural Karnataka to capture the impact of the outbreak and lockdown on their access to public health services […]

The unique challenges posed by COVID-19 in Iran and Afghanistan

The following interview was conducted on April 7th, 2020. On the 7th of April 2020, the South Asia Center and the Future of Iran Initiative hosted a virtual panel on Iran and Afghanistan’s public health response to the COVID-19 pandemic, moderated by Nonresident Senior Fellow Fatemeh Aman. The panel consisted of Dr. Fatima Rezaei, Iran Country […]