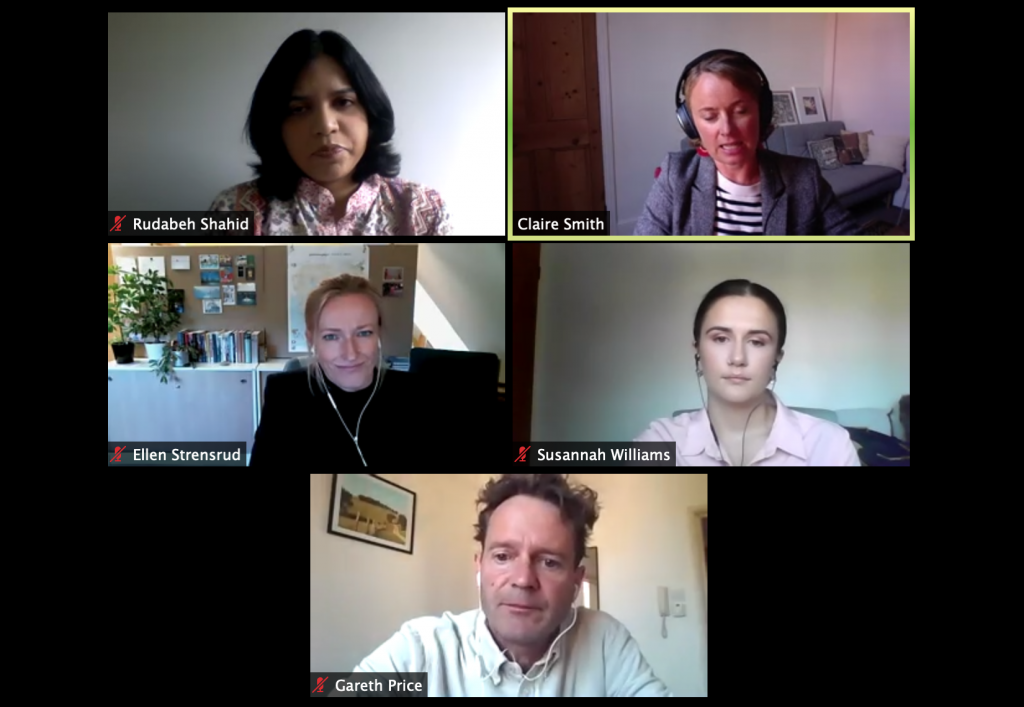 On Thursday, September 17, the Atlantic Council’s South Asia Center partnered with Chatham House to host a panel discussion on the Rohingya refugee crisis to discuss the evolution of the crisis as well as potential international solutions. The webinar was moderated by Dr. Gareth Price, Senior Research Fellow of Chatham House’s Asia-Pacific Programme, and included: Dr. Rudabeh Shahid, nonresident senior fellow of the South Asia Center; Dr. Claire Smith and Ms. Susannah Williams of the Department of Politics at the University of York; and Dr. Ellen Stensrud, a researcher at the Norwegian Center for Holocaust and Minority Studies.

Dr. Stensrud began the discussion by providing some background into the situation of the Rohingya people in Myanmar, framed in the context of their citizenship status. If Rohingyas are to have long-term security and safety, Dr. Stensrud explained, citizenship rights are essential. However, she noted that at this point, with most of the Rohingya in Rakhine state and other parts of Myanmar having been forcibly removed, such a solution is unlikely.

Next, South Asia Center nonresident senior fellow Dr. Rudabeh Shahid offered insight into the Rohingya refugees in Bangladesh as well as the many difficulties that they face. She explained that the refugee camps are densely populated (three times the density of Manhattan), and lack basic services. In the context of COVID-19, these conditions pose a dangerous threat. There have already been a number of cases in the camps, and the death rate among the Rohingya refugees is 8%, far higher than the Bangladeshi host population’s rate of 2%. There has been one positive development, however; recently, the refugees have obtained access to 3G and 4G networks, allowing them to gain information on best practices for social distancing and sanitation.

Having described the Rohingya’s situation in Bangladesh, Dr. Shahid then proposed solutions. She asserted that the international community must offer financial support to the refugees in order to support improved access to basic services. Additionally, when a vaccine for COVID-19 is finally introduced, there must be immediate and comprehensive vaccination for the Rohingyas. Dr. Shahid also argued that there must be swift international condemnation of Myanmar, and that economic sanctions must be put in place, stressing the importance of China and India in particular on this front. Finally, the international community must also provide for the resettling of Rohingya refugees in “third countries” given that their returning to Myanmar is unlikely. Dr. Shahid cited the resettling of the Lhotshampa refugees from Bhutan as a successful example of this policy.

Dr. Claire Smith and Ms. Susannah Williams then provided an analysis of the crisis through the lens of Indonesia. They detailed the “middle way” that Indonesia has taken in regard to the Rohingyas – on one hand, Indonesia has provided financial and humanitarian aid to the refugees, but on the other hand it has not taken any significant action against Myanmar for its actions. Dr. Smith asserted that, as the world’s largest Muslim-majority country, the government of Indonesia likely implemented the policy as a result of domestic pressure to help the Rohingya people. The government then supported Islamic humanitarian organizations in these efforts. However, as an ASEAN partner, Indonesia is not inclined to criticize Myanmar publicly. Rather, its preference is to work within the ASEAN structure to internally influence Myanmar and the Rohingya crisis. Dr. Smith and Ms. Williams explained that this this pursuit of a “middle way” can be understood in the context of Indonesia’s broader foreign policy outlook, which stresses principles of national sovereignty, non-interference, and respecting the territorial integrity of other countries.

After laying out their main points, the speakers fielded questions from the audience. The first question asked if other countries could do more to improve the situation for the Rohingya people. Dr. Smith discussed the differences between the responses of countries within ASEAN, contrasting Malaysia’s more overtly critical and forceful response to Indonesia’s more equivocating one. This contrast, she contended, underscores that reactions to the crisis are not a West vs. East issue. Dr. Shahid argued that a more forceful approach is necessary, specifically in the form of economic sanctions. At the same time, these sanctions should distinguish between Myanmar’s people and its military and be designed to target the latter. Dr. Stensrud, referring to Western countries specifically, explained that there is not much influence that other nations can exercise over Myanmar on this issue at this point. Additionally, while the subject of Rohingya citizenship could have been brought up during Myanmar’s 2015 general elections, it is too late now.

The speakers then answered a question about the risk of radicalization among Rohingyas residing in refugee camps. Dr. Shahid discussed some reports of Arakan Rohingya Salvation Army (ARSA) infiltration in the refugee camps in Bangladesh but clarified that we do not have concrete evidence to know for sure. She noted that ARSA is largely the byproduct of years of violence against the Rohingyas and is an unfortunate reality that we must contend with. Dr. Smith then addressed this question in the Indonesian context, explaining that pressure from Islamic groups domestically was one of the factors behind the government’s financial support of the refugees.

Finally, the speakers addressed the situation of Rohingyas that are still in Myanmar, and the future of the Rohingya people in the country more broadly. Dr. Shahid and Dr. Stensrud both agreed that there could be no future for the Rohingya in Myanmar until the citizenship issue is resolved. Dr. Stensrud argued that the Myanmar concept of citizenship grew out of the national myth of unity of the country’s ethnic groups, from which the Rohingya were excluded. If that myth could be created and believed, then the country could build a new myth, one more centered around the country’s diversity.

Overall, the discussion led by these experts examined the context within which the Rohingya crisis emerged, and the difficulties that the Rohingya refugees face today. By addressing these issues and proposing concrete solutions, the panelists put forward a framework for the international community to pursue in order to improve the situation of the Rohingya people.

As South Asia observes the seventy-third anniversary of the Partition of India, Bangladesh finds itself in conflict with the statistics cited by many to celebrate what they perceive to be rising prosperity. Simultaneously, the rise in communal tensions in West Bengal possibly signal long lasting consequences for India’s secular polity which might adversely affect Hindu-Muslim relations in South Asia […]