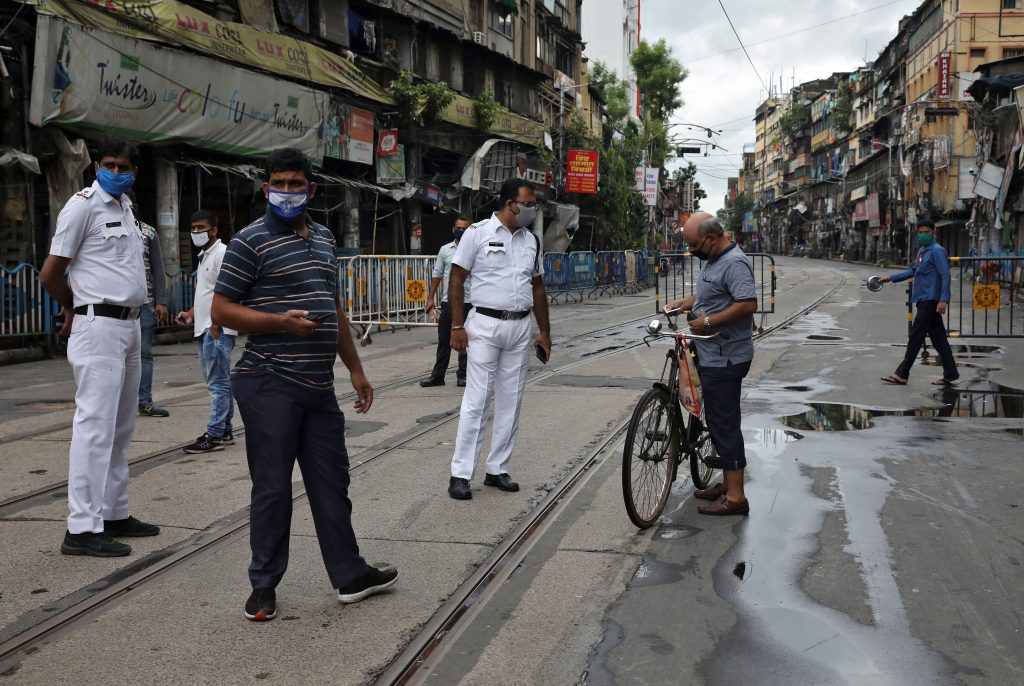 As South Asia observes the seventy-third anniversary of the Partition of India, Bangladesh finds itself in conflict with the statistics cited by many to celebrate what they perceive to be rising prosperity. Simultaneously, the rise in communal tensions in West Bengal possibly signal long lasting consequences for India’s secular polity which might adversely affect Hindu-Muslim relations in South Asia in the years to come.

The strikingly different trajectories of the two parts of erstwhile Bengal, which now compose the state of West Bengal in India and what became the nation of Bangladesh, may seem interesting to an outside observer. In 1992 – when the Babri Mosque was demolished by Hindu nationalist organizations in North India – communal tensions were high across the border in Bangladesh, and there were many reports of attacks on the minority Hindu population. While riots did happen in West Bengal, they were not as organized or intense compared to what it had undergone a year before Partition in 1946, when Hindu-Muslim tensions were high.

For most of West Bengal’s post-partition history, religious polarization has largely been absent from the political arena. The opposite seems to be true in the case of Bangladesh. Nevertheless, in recent years, this dynamic appears to have changed. While West Bengal is seeing the rise of right-wing forces, Bangladesh is currently facing numerous other challenges such as rising income inequality and an unmanageable refugee crisis, which perhaps supersedes the concerns posed by Islamism.

The lands that comprise yesteryear’s Bengal, consisting of West Bengal and Bangladesh, have a shared history until the end of British rule. Islam spread during the era of the Sultans of Bengal (1342-1576) and the rule of the Mughal Empire in Bengal (1576-1757). By the late eighteenth century, the British East India Company (EIC) emerged as a major military power, and in 1757 defeated the last Nawab of Bengal at the Battle of Plassey, thereby gaining control over Bengal. In 1905, the British administration partitioned Bengal for administrative reasons. The Muslims of the province largely supported the move as they felt that their aspirations were being expressed through the creation of a Muslim-majority province in the east. However, when this move was reversed in 1911 due to anti-partition protests, Bengal’s Muslims felt alienated as they saw the government compromising their interests. This led to the rise in popularity of the Muslim League Party in the region, which ultimately spearheaded the movement for the creation of Pakistan in the years to come.

After the end of World War II, the British decided to make a swift exit from India and in doing so created two sovereign nations based on religious considerations—India and Pakistan. One decisive factor for the British authorities to conclude that Hindus and Muslims cannot have a mutual coexistence was due to the Great Calcutta Killings in the 1946 Direct Action Day Riots, where Hindus and Muslim mobs clashed, resulting in the death of over four thousand people. Religious considerations supplanted any discussions regarding the creation of a united Bengal, which was supported by many Muslims and lower caste Hindus of the province. With this second partition of Bengal, most Hindu-majority districts remained part of India, while most Muslim-majority districts became the eastern wing of Pakistan.

With the partition of India in 1947, many Muslims migrated to East Pakistan, and in doing so left the remaining Muslims of West Bengal with highly uncertain political and societal standing. Before Partition and under the leadership of individuals like A. K. Fazlul Huq, Muslims in South Asia played a direct role in social and political life. However, after 1947, this changed; Muslims were relegated to the margins of society and became a far more vulnerable minority in West Bengal. The decade after Partition was marked by targeted attacks on the Muslim community in Calcutta (now Kolkata) and border regions. In such a climate, many Muslims chose to live in urban ghettos, finding safety in numbers. Many also migrated from their urban locations to the Muslim populated rural countryside in the districts of Bardhaman, Malda, Murshidabad, and northern Bengal.

The northern areas of West Bengal had a history of peasant movements such as the Tebhaga struggle. In such movements, Muslims joined local tribes and lower caste Hindus, building class solidarities that transcended religious identities. In the 1970s, these peasant movements were capitalized upon by the Communist Party of India (CPM) which mobilised support among the rural Muslims of Bengal. As such, during CPM’s three-decade rule (1977-2011) and while rising Hindu nationalism threatened minorities in North India, Muslims were relatively safe in West Bengal.

Over the years, the CPM government was accused of ignoring issues linked with Muslim identity in its pursuit of class politics. During their regime (which lasted until 2011), it has been suggested that the Bengali Hindu high-caste leadership of CPM gave very little representation to Muslims in key positions. Even the-then Chief Minister of Gujarat, Narendra Modi, mocked the “so-called” secular communist leadership in his 2011 op-ed by citing the Sachar Committee Report (2005) which highlighted how the socio-economic indicators for West Bengal’s Muslims were much worse compared to their co-religionists in Gujarat.

Another factor which distanced Muslims from the CPM was the farmers’ struggle to oppose land acquisition in places like Singur and Nandigram. During this time, Mamata Banerjee’s All-India Trinamool Congress (TMC) party gained popularity among West Bengal’s Muslims as it formed a close association with Muslim organizations, who alleged that the CPM was grabbing Muslim farmers’ lands during the Singur-Nandigram movement.

During Mamata Banerjee’s year in office, her ruling TMC party has been blamed for pandering to Muslim religious leadership. Critics argue that her administration engaged in visible identity politics that allegedly resulted in the rise of the Bharatiya Janata Party (BJP) due to the ensuing religious polarization. In the 2019 national elections, the BJP won 18 out of 42 MP seats of West Bengal by targeting TMC for the appeasement of Muslims in the state and promising to throw out what they termed “illegal” Bangladeshis by implementing the CAA (Citizenship Amendment Act) and the NRC (National Register of Citizenship). The strong protest from Chief Minister Mamata Banerjee on CAA and NRC has done little to assuage the fears of Muslims, who protested in large numbers across various urban centres including Kolkata.

Story of what was then East Pakistan

Although the twenty-four years of united Pakistan saw the migration of many Hindus to India, it was also marked by the rise of the regional identity consciousness of Bengali Muslims in Pakistan’s eastern province. Even though Muslims in Bengal had overwhelmingly supported the Muslim League in colonial India, economic and cultural discrimination from the 1950s onwards in Pakistan catalysed a distinct Bengali identity consciousness, culminating in the demands for greater regional autonomy.

In 1971, intending to suppress dissent and permanently crush Bengali nationalism, the Pakistani military began a crackdown in its eastern wing which resulted in a full-blown refugee crisis, with about ten million asylum seekers entering the border-states of India. For several months, India hosted the refugees and trained many of the East Bengali guerrilla combatants who waged a nine-month war against the Pakistan Army. Subsequently, in December, the Indian army finally intervened militarily by entering the territories of East Pakistan, leading to the surrender of the Pakistani armed forces and the formation of the new nation of Bangladesh.

While the period of East Pakistan’s existence saw the group consciousness of Bengali Muslims take on a character attributed to linguistic and regional factors, this was soon to change following the independence of Bangladesh. After more than a decade of military dictatorship, Islamism emerged as a dominant political force, as the Bangladeshi military generals lacked popular legitimacy and utilized religion as an instrument to strengthen their authority.

This courting of Islamists continued into the late 1980s through the movement to restore democracy and the rise of two political parties, the Awami League (AL) and Bangladesh Nationalist Party (BNP). Both political parties have pandered to Islamists in their pursuit of electoral successes, including trying to build coalitions with Islamist parties and in one case actually being a coalition partner. In recent years, this acquiescent attitude towards Islamism has enabled the rise of extremist groups such as the Hefazat-e-Islami, whose hardline policies demand the death penalty for blasphemy among a host of other extreme policies.

That said, there are now more important issues than the rise of Islamism. The first includes rising income inequality in Bangladeshi society. With sustained GDP growth of about seven percent over the last few years, the country expects to surpass India’s per capita income by 2030. Nevertheless, the top 5% has taken over 95% of total income, and this is expected to increase with greater prosperity. The second issue concerns the situation of the Rohingya refugee crisis unfolding in its south-eastern borders. As a result of ethnic violence in neighbouring Myanmar, hundreds of thousands of Rohingyas fled to Bangladesh in 2017 and remain stateless in refugee camps. Continued violence in Myanmar and failed repatriation attempts by Bangladesh suggests that the Rohingyas will remain stuck in Bangladesh for the foreseeable future and forced to live largely excluded from society.

While the two Bengals have a shared history, their trajectories appear to be markedly different. Whereas West Bengal has had minimal religious polarization until recently, Bangladesh’s political leadership has a long history of courting Islamists.

Nevertheless, the intensification of the Hindu right-wing in West Bengal has changed that dynamic. As the state assembly elections are to be held in 2021, statements by Bengali stalwarts such as Nobel Laureate Amartya Sen show that identity politics are now in full swing in the state, endangering pluralism in eastern India.

Although the current AL-led government in Bangladesh witnessed Islamist militant attacks such as the Holey Artisan Bakery massacre in 2016 and the hacking of several atheist bloggers to death between 2013 to 2016 by local ISIS-linked Islamists groups, there are arguably two greater worries superseding the rise of Islamism. The immediate concerns of the country include the Rohingya crisis and growing income inequality, which do not appear likely to go away anytime soon.

Image: Police officers check travel permission papers of a man, during the two-day weekly lockdown in the West Bengal state, amidst the spread of the coronavirus disease (COVID-19), in Kolkata, India, August 5, 2020. REUTERS/Rupak De Chowdhuri