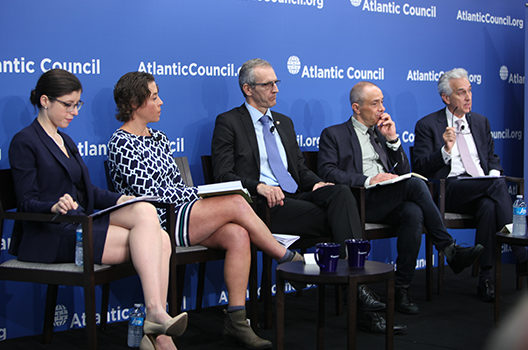 On October 13, 2016, the Atlantic Council’s Future Europe Initiative and Dinu Patriciu Eurasia Center hosted a public conference “The Illiberal Turn?: Reasserting Democratic Values in Central and Eastern Europe.” This conference was organized in partnership with Radio Free Europe/Radio Liberty (RFE/RL), the International Republican Institute (IRI), and the Center for International Private Enterprise (CIPE), and in cooperation with the National Democratic Institute (NDI). This event addressed the political, economic, and social currents that challenge the region’s path toward greater cooperation, prosperity, and freedom.

Mr. Damon Wilson, executive vice president of programs and strategy at the Atlantic Council introduced the Hon. Thomas Melia, assistant administrator of Europe and Eurasia at the United States Agency for International Development (USAID). Wilson emphasized that if the core of the transatlantic community falters in its commitment to democracy and fragmentation ensues, Europe’s periphery and the European Union’s newest members will experience an outsized impact. Assistant Administer Melia discussed the strategic importance of democracy in Central and Eastern Europe in ensuring the broader strength and stability of the continent. He also asserted that the US government must allocate the necessary resources to carry out its policy intentions in the region.

Dr. Alina Polyakova, deputy director of the Dinu Patriciu Eurasia Center at the Atlantic Council, moderated a conversation on “Democratic Backsliding? The State of Democracy in the Region” with Dr. Maria Stephan, senior policy fellow at the United States Institute for Peace; Dr. Jeffrey Gedmin, nonresident senior fellow of the Atlantic Council’s Future Europe Initiative; Mr. Brian Whitmore, author of the Power Vertical from RFE/RL; and Dr. Ivan Stefanec, member of the European Parliament from Slovakia. This panel considered the indicators of a potential illiberal turn emerging in countries thought to be on a path to democracy, and proposed strategies to counter illiberal developments in the region.

Mr. Francisak Viachorka, Vaclav Havel journalism fellow of RFE/RL, moderated a conversation on “The Illiberal Turn and Media Freedom” with Ms. Jill Dougherty, former foreign affairs correspondent for CNN; Mr. Aleksander Dardeli, vice president of IREX; and Ms. Zselyke Csaky, senior researcher for nations in transit at the Freedom House. The panelists discussed the importance of reliable media sources and the challenge of Russia’s efforts to spread a narrative of perceived failures by Western democracy. The discussants also analyzed the role of the country on the receiving end of propaganda and how critical information consummation skills can help promote the protection of the freedom of the press.

Mr. Marc Schleifer, regional director for Europe, Eurasia and South Asia at CIPE, moderated a conversation on “Managing Economic Crises and Combating Corruption: The Role of the Business Community” with Mr. András Lőke, president of Transparency International Hungary and founder and editor-in-chief of Ittlakunk.hu, Ms. Heather Conley, senior vice president for Europe, Eurasia, and the Arctic and director of the Europe program at the Center for Strategic and International Studies, Mr. Hans Timmer, chief economist for Europe and Central Asia at the World Bank, and Ms. Sally Painter, senior advisor to the Atlantic Council and co-founder and COO of Blue Star Strategies. This panel focused on the economic causes and consequences of democratic backsliding in the region as well as the potential cures for corruption and illiberal activity. According to the panelists, an absence of a clear, positive vision for capitalizing on the opportunities of the great disruption as well as minimizing its challenges could provoke those left behind to support an illiberal, fear-driven agenda, rather than open, democratic ideals.

Ms. Miriam Lexmann, director of the EU office of IRI, moderated a discussion on “Strengthening Pro-Democracy Forces: How Should the Transatlantic Community Respond?” with Mr. Carl Gershman, president of NDI, Ambassador Kurt Volker, executive director of the McCain Institute for International Leadership, and Ms. Nadezhda Mouzykina, senior program manager for Central & Eastern Europe at NDI. This panel sought to forge a strategic response by the transatlantic community for the aforementioned issues, and explored approaches to enable constructive US and transatlantic engagement in the region by political leaders as well as civil society members and moderate intellectuals.

Ambassador Mark Green, president of IRI, closed the conference, assessing the transatlantic community’s capacity to counter the political, social, and economic trends pointing Central and Eastern European democracies toward an illiberal turn. He highlighted that the new generation of young, cooperative party representatives across the political spectrum in the region embody a strong force for open, inclusive democracy in the face of internal challenges that are exploited by external forces. Ambassador Green encouraged the audience to consider what they can do “as friends of Europe and friends of democracy… to reach out and magnify these cross-party friendships…to reinforce these bonds in the face of highly-charged times.”

Ahead of this conference, the Atlantic Council’s Future Europe Initiative and Dinu Patriciu Eurasia Center held on September 26, 2016 a private discussion on the current situation in Central and Eastern Europewith Mr. Jan Hamáček, speaker of the chamber of deputies of the Parliament of the Czech Republic; Minister Karel Schwarzenberg, chairman of the foreign affairs committee of the Parliament of the Czech Republic; and Ambassador Michael Žantovský, executive director of the Václav Havel Library.