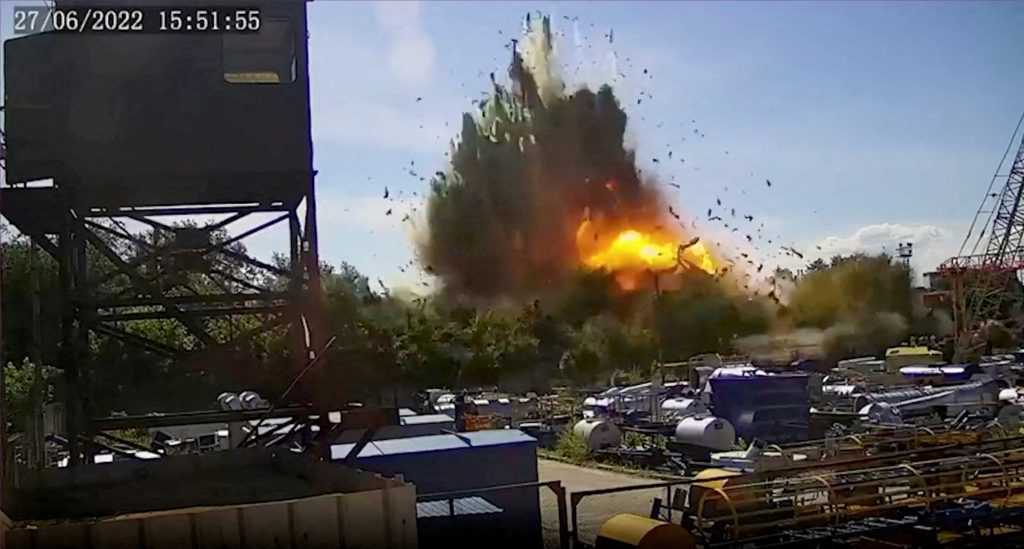 This is a story of evil versus good.

It’s the story of a despot’s ruthless attacks on civilian targets in Ukraine, versus the historic, but nonetheless insufficient, rallying of democratic states to save the country.

At midday on Monday, in the central Ukrainian industrial city of Kremenchuk, sitting serenely astride the Dnipro River, about a thousand men, women, and children wandered the Amstor shopping mall, trying to enjoy some normalcy amidst a brutal war.

Around the same time at Schloss Elmau in Germany’s Bavarian Alps, the Group of Seven (G7) leaders, representing the world’s largest democracies, huddled around conference tables in an effort to add to their far-reaching sanctions on Putin and Russia. They debated options to choke the finances that fuel Putin’s war, including putting a price cap on oil sales to Russia that could reduce the one billion dollars the world pays Russia every day for energy.

As they struggled to make progress, one of the missiles screamed down on the shopping mall. A CCTV video captured a bucolic day, with wispy clouds adorning the otherwise blue sky, and then the massive fireball of the blast and the curling up of a gigantic black smoke plume. Shattered glass and debris flew past the camera.

A day later, as Ukrainian officials tallied the death toll—at least twenty dead and fifty-nine wounded in a war where Putin’s military has already killed tens, if not hundreds of thousands of Ukrainians—world leaders gathered for the NATO summit that had brought me to Madrid. They were abuzz about the timing of Putin’s shopping mall strike, knowing that it was aimed as much at them as Ukraine.

“Talk as much as you want,” Putin seemed to be saying to them. “Sign whatever documents you like. I’ll outlast you and your spoiled societies with my war of attrition, restoring imperial Russia and sealing my place in history even as your decadent West continues its decay.”

Putin could be confident that despite historic agreements in Madrid this week, and even though arms deliveries from the United States and its partners are increasing in numbers and quality, no one was yet willing to provide the heavier, longer-range, precision weaponry that could have prevented the shopping mall strike and so many others, and might allow an urgently needed counteroffensive.

Even so, NATO reached a level of unity unseen in more than thirty years.

The following day NATO leaders would sign off on a new Strategic Concept, highlighting Russia as their most present danger but including China for the first time as a matter of common concern. The leaders of Australia, Japan, South Korea, and New Zealand attended a NATO summit for the first time as partners and guests.hat the Alliance understood it faced a global and interrelated challenge.

NATO’s China language signaled that the Alliance understood it faced a global and interrelated challenge. Considering that thirty countries needed to sign off on the text, many of them still with China as their number one trading partner, it’s a powerful read.

“The People’s Republic of China’s (PRC) stated ambitions and coercive policies challenge our interests, security and values,” it said. Later it continued, “The PRC seeks to control key technological and industrial sectors, critical infrastructure, and strategic minerals and supply chains. It uses its economic leverage to create strategic dependencies and enhance its influence. It strives to subvert the rules-based international order, including in the space, cyber and maritime domains.”

There was a lot of celebratory talk among allies about their increased unity and deepened purpose, including US President Joe Biden’s declaration that NATO was sending an “unmistakable message” to Putin.

The closer you live to Russia as an EU citizen, the more you argue, as I did in this space on June 5, that Putin doesn’t need the diplomatic off-ramp that Macron is offering but rather the dead-end that can only be brought by tougher sanctions and a more effective Ukrainian counter-offensive backed by longer-range weapons.

Among other agreements, NATO acted to shore up its eastern and southern flanks, and the US Army will send a corps headquarters to Poland and more troops to the Baltics and Romania. NATO pledged to increase its high-readiness forces from forty thousand to three hundred thousand, even as Sweden and Finland brought it significant new military weight.

Spanish Foreign Minister José Manuel Albares heralded the summit as potentially as significant as Yalta (heaven help us) or the fall of the Berlin Wall.

At a NATO Public Forum that the Atlantic Council co-hosted on the margins of the summit, I asked French Foreign Minister Catherine Colonna how she would rank the historic moment. “History will tell,” she said.

No one should miss Ukrainian President Volodymyr Zelenskyy’s message to G7 leaders this week that they must provide him the means for a counteroffensive to push back Russian troops before winter sets in and Ukraine’s allies lose interest in the face of growing economic headwinds.

Putin might fold over time in the face of a more determined West and better-armed Ukraine, writes Ip, but he’s wagering that he can “inflict a high enough short-term cost on Western consumers that political support for Ukraine will crumble.”

I leave Madrid encouraged by an increased consensus among European and Asian democracies that a Ukrainian defeat would be disastrous for Europe and the world order as other despots calculate their own opportunities.

Yet I also come away discouraged that for all this week’s progress, the military support and sanctions still aren’t equal to the historic stakes.

In this contest between a determined despot and rallying democracies, the forces for good had an excellent week. If they don’t build upon it, and fast, it won’t be enough.

This article originally appeared on CNBC.com. Frederick Kempe’s Inflection Points will return in September after a summer pause. Special editions might appear, as warranted by events.

This is big. For anyone with even a passing interest in transatlantic security and foreign policy, this year’s NATO Strategic Concept is a must-read. Understanding the interrelated challenge to the international order, all thirty allies signed on to this document, which identifies not only Russia, but also China, as potential threats.

“Authoritarian actors,” the document writes, “challenge our interests, values and democratic way of life. They are investing in sophisticated conventional, nuclear and missile capabilities, with little transparency or regard for international norms and commitments. Strategic competitors test our resilience and seek to exploit the openness, interconnectedness and digitalisation of our nations. They interfere in our democratic processes and institutions and target the security of our citizens through hybrid tactics, both directly and through proxies. They conduct malicious activities in cyberspace and space, promote disinformation campaigns, instrumentalise migration, manipulate energy supplies and employ economic coercion. These actors are also at the forefront of a deliberate effort to undermine multilateral norms and institutions and promote authoritarian models of governance.” Read more →

Among the many war crimes Putin is alleged to have committed during the Russian invasion of Ukraine is the large-scale theft of Ukrainian grain. This brilliantly reported Financial Times investigation sheds light on how that grain is smuggled.

While the Financial Times cautions that “There is no evidence that the grain being shipped out of Crimea on the Fedor or other ships analysed by the FT has been stolen from parts of Ukraine now occupied by Russia,” the newspaper reports that “…there is a pattern of activity that indicates a rise in smuggling from Crimea. Although there is little historical data about volumes of exports through the port, Ukrainian activists who monitor the port say they have seen a rise in grain traffic at Sevastopol in May and into June compared with previous years.”  Read more →

One of the clearest signs of the new geopolitical fault lines was the inclusion of the United States’ Asian and Pacific allies—including Japan, South Korea, and Australia—at this year’s NATO summit. As Michael Hirsh writes, this is a sign of an incipient new cold war which encompasses China and Russia as adversaries.

“But plainly,” Hirsh writes, “the major Western powers now believe that—from Mariupol, Ukraine, on the Black Sea to Taipei, Taiwan, on the Taiwan Strait and possibly all the way to Honiara, Solomon Islands, in the South Pacific—a new sort of iron curtain is descending around the world. In front of that line on the European continent lie the newly invigorated Western European and NATO countries as well as the former Soviet bloc states that have since joined NATO or want to, including the Baltic countries and now Ukraine. Read more →

This smart column from the Wall Street Journal’s Greg Ip nails how Russia is using an energy weapon in its cold war with the West, and how Biden must course correct on energy.

“Russian President Vladimir Putin knows that in this cold war, time is not on his side,” Ip writes. “Even with China in his corner, the U.S. and its allies have an overwhelming advantage in wealth, knowledge, technology and finance. Mr. Putin’s only path to victory is to inflict a high enough short-term cost on Western consumers that political support for Ukraine will crumble.”

Therefore, Ip concludes, “the challenge for Mr. Biden and other Western leaders is to navigate the next six months while Mr. Putin exploits the leverage he now has.” Read more →

In this week’s must-read, Ivo Daalder and James M. Lindsay make a powerful argument that the Russian invasion of Ukraine has provided the United States and its allies a rare second chance to rebuild the international order and correct their previous mistakes.

“Even as the West works to manage these differences,” they write, “it should turn its newfound unity into a broader effort to save the rules-based order. The first step should be to create a new group, the G-12, that would bring together the United States and its leading allies in Asia, Europe, and North America. Every member of this group has a vital interest in preserving the order, and none of them can do it on their own. But formalized cooperation alone will not be enough. The United States and its allies will need to take the second step of learning from the mistakes they had made over the last three decades.”

“The silver lining in the horror of the aggression against Ukraine,” they add, “is that it gives the United States and its Western allies a chance to do what they failed to accomplish after the end of the Cold War: reinvigorate international institutions and deepen cooperation on transnational threats. But this moment will not last forever. The West needs to resist the temptation to regard the aggression against Ukraine as an aberration rather than a trend. To that end, the United States should join with the 11 other prospective members of the G-12 to revitalize the rules-based order. Western democracies cannot afford to squander this second chance to get things right.” Read more →

The triumphs and question marks from this week’s NATO summit

How will history judge this consequential gathering? From Madrid to Washington, our experts are here with answers.

Image: FILE PHOTO: A view of the explosion as a Russian missile strike hits a shopping mall amid Russia's attack on Ukraine, at a location given as Kremenchuk, in Poltava region, Ukraine in this still image taken from handout CCTV footage released June 28, 2022. CCTV via Instagram @zelenskiy_official/Handout via REUTERS THIS IMAGE HAS BEEN SUPPLIED BY A THIRD PARTY. MANDATORY CREDIT. REFILE - CLARIFYING FOOTAGE RELEASED JUNE 28, 2022/File Photo