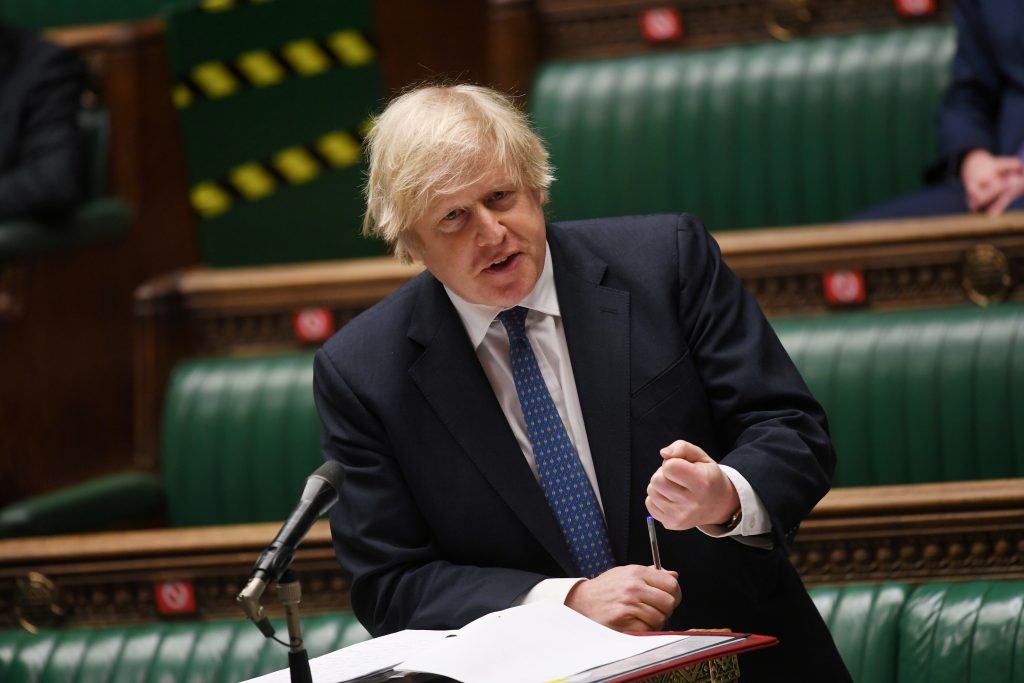 Has British Prime Minister Boris Johnson finally found his country the global role that has eluded it since it lost its empire?

Has the irreverent, ambitious, moppy-haired leader of the United Kingdom—the biographer, admirer, and sometimes emulator of former Prime Minister Winston Churchill—provided the blueprint for his own shot at greatness?

Or are Johnson’s critics right that this week’s release of “Global Britain in a Competitive Age: the Integrated Review of Security, Defence, Development, and Foreign Policy”—the impressive, 114-page guidance for the future from Her Majesty’s Government—is brave but insufficient cover for the historic Brexit blunder that will forever stain his legacy?

One thing is for sure. This document came as a welcome reminder of British strategic seriousness following further yammering about national decline after Oprah Winfrey’s sit-down with rogue royals Prince Harry and Meghan Markle (which included a visit to their California farm and their rescue chickens).

Johnson’s paper also comes as a belated effort to answer former US Secretary of State Dean Acheson’s stinging West Point speech in 1962, where he argued, “Great Britain has lost an empire and has not yet found a role.”

At the time, the legendary US diplomat was praising the “vast importance” of the United Kingdom’s application to become part of the then-six-country European Common Market, which it would only join eleven years later in 1973.

“The attempt to play a separate power role,” said Acheson, “that is, a role apart from Europe, a role based on a ‘special relationship’ with the United States, a role based in being head of a ‘commonwealth’ which has no political structure, or unity, or strength–this role is about played out.”

One wonders what Acheson would say today, more than a year after the United Kingdom left the European Union (EU)—forty-seven years after it joined—and with its current prime minister searching yet again now for that elusive role.

It is a fair bet Acheson would be encouraged by the Integrated Review’s ambition, clarity, and detail. Though at the same time, he would question how little attention it gives to what he considered the central role of the European dimension to Great Britain’s role.

Perhaps the pain of divorce remains too near for sound reflection.

A major strategy rethink, from democracy to science and technology

Still, this paper takes the United Kingdom in many of the right directions that could ensure its outsized global role as a medium-sized European country with world-leading security and intelligence agencies.

It also shows a keen understanding of the most pressing global challenges, making it a must-read for Biden administration officials. It’s inspiring as a rallying point for fellow democratic countries.

“History has shown that democratic societies are the strongest supporters of an open and resilient international order,” wrote Johnson in the paper’s forward, “in which global institutions prove their ability to protect human rights, manage tensions between great powers, address conflict, instability and climate change, and share prosperity through trade and investment.”

Most notable among Johnson’s new ambitions for Great Britain, as he put it in his foreword for the paper, is to “[secure] our status as a Science and Tech Superpower by 2030.”

Eight pages detail how the United Kingdom intends to do that by expanding research and development spending, bolstering its global network of innovation partnerships, and improving national skills—including through a Global Talent Visa to attract the world’s best and brightest.

“In the years ahead, countries which establish a leading role in critical and emerging technologies will be at the forefront of global leadership,” the paper says, identifying quantum computing, artificial intelligence, biology engineering, and cyber domains as areas of focus.

Without dusting off the overused term “special relationship,” the United Kingdom would place highest priority on ties with the United States (“none more valuable to British citizens”) and at the same time, “tilt” its international focus toward the Indo-Pacific.

Johnson has invited the leaders of Australia, South Korea, and India to attend his Group of Seven (G7) summit in June, and he is visiting India in April to step up efforts to deepen relations with the world’s largest democracy, which was under the British Raj until 1947.

There is much more in the pages of what is being billed as the United Kingdom’s most significant strategic rethink since the Cold War, which will be followed this week by its military dimension. The bumper sticker is that the United Kingdom will be “a problem solving and burden-sharing nation with a global perspective.”

What the Integrated Review means for the United Kingdom’s future

Many will argue that this paper can’t undo the strategic error of Brexit. They point to the inevitable, long-term hit to the British economy, both to London as a financial center and to the United Kingdom as a domestic manufacturing base for European markets.

They question whether the United Kingdom, with a population that is 0.87 percent of the global total and an economy that is sixth in the world, will ever have influence to rival what it enjoyed as one of the leaders of an EU with its total of 5.8 percent of global population and 17.8 percent of the world economy.

That said, if Johnson’s purpose was to vindicate his Brexit decision, the paper comes at a good time. Criticism is growing of EU leadership and bureaucracy in its handling of COVID-19 and vaccine distribution, and the United Kingdom is performing well by comparison.

What is most significant about the document is its pragmatic, non-ideological, and intelligent framework for the future. There is none of the Johnson bluster in a paper designed as “a guide for action.”

One can see the fingerprints of the man chosen by Johnson to lead the review, the forty-year-old historian John Bew. Johnson recruited him for his broad perspective, at the same time steering away from the more conventional choice of a senior government official or politician.

Most significantly, the Integrated Review has turned “Global Britain” from a much-maligned slogan to an extraordinary plan. If the United Kingdom can execute it, the former empire may have found a global role equal to its resources, capabilities, and ambitions—and the historic moment.

If you are as much of a geek as I am about British history, about the United Kingdom’s search for post-Brexit meaning, and about the continued significance of the US-UK relationship, read all of this historic document.

“Having left the European Union, the UK has started a new chapter in our history,” writes Johnson in the foreword. “We will be open to the world, free to tread our own path, blessed with a global network of friends and partners, and with the opportunity to forge new and deeper relationships.”

The plan is reasonable and doable—but falls far short in defining sustainable, strategic relations with the EU. Perhaps a chapter two?​​​​​ Read More →

When the Chinese government suddenly blocked Jack Ma’s Ant IPO valued at over $300 billion in November, it was a clear sign that President Xi Jinping saw an unleashed, large private sector as a threat that the Chinese Communist Party needed to rein in.

Tom Mitchell for FT’s The Big Read writes about the risk that China’s crackdown on the private sector brings to the economy, particularly on curbing lending programs in the country.

“The outcome of the dramatic crackdown on Ma’s empire and the fintech industry will be a defining moment for the party’s relationship with the private sector,” he writes. Read More →

Reflecting on the past two decades of President Vladimir Putin’s rule over Russia, Leon Aron in Politico Magazine warns of Putin’s habit of turning up the nationalist heat through military action and wars at moments like these.

He observes that Putin’s popularity was at its highest as a wartime leader, first during the 2000 war in Chechnya and again after the 2008 Georgia War. Putin’s seizure of Crimea in 2014 and then his military intervention in Syria, rescuing the Assad regime, are part of that pattern.

Writes Aron: “Big ideas beckon, solemn dreams enchant, a place in history awaits. And more than at any time since he’s been in the Kremlin, Vladimir Putin may be looking for a triumph.” Read More →

The Atlantic Council’s Mathew Burrows and Robert Manning urge the Biden administration to insert a dose of humility to America’s foreign policy.

They usefully quote US Secretary of State Antony Blinken from his Senate testimony: “Humility and confidence should be the flip sides of America’s leadership coin. Humility because we have a great deal of work to do at home to enhance our standing abroad.”

That said, they counsel “pushing the needle more toward humility than confidence.”

Unlike other work of this genre, they mercifully are not arguing for US disengagement or isolationism, but rather for smarter engagement. The operative paragraph comes at the end:

“A starting point is the reality that international systems work to the degree major powers are invested in them… In practical terms, it means that alliances are an important base line, and that power is situational. Ad hoc multilateralism is increasingly the key to problem-solving—a variable geometry of shifting issue-specific coalitions (e.g., the P5+1 on Iran, the Six-Party talks on North Korea, a major emitters group on climate). There remains a desire for credible U.S. leadership. This approach, with the United States enfranchising partners in decision-making to pool power tailored to specific global problems, would foster a wider sense of inclusion, legitimizing U.S. power, and would be more likely to sustain domestic support.” Read More →

Every so often—and this is one of those times—so-called foreign policy “realists” and “idealists” get into an argument about the role of values in America’s global engagement. It is a misguided debate, as Hal Brands and Zack Cooper argue powerfully in Foreign Affairs, as no US foreign policy could be sustainable at home or effective abroad if it did not reflect democratic values.

In other words, it would be unrealistic even for an American realist not to factor in values.

Enter US President Joe Biden, who calls democracy “our most fundamental advantage.” His administration’s first meetings with Chinese officials in Alaska underscored this contest of ideals, which is impossible to separate from the contest over interests.

“Purging ideology from American statecraft would be both ahistorical and unstrategic,” write the authors. “The United States won the Cold War precisely because it put values near the center of that competition. Likewise, if Washington hopes to understand Beijing today, to mobilize its democratic friends for a long struggle, and to exploit its asymmetrical advantages, it must take ideology seriously.”

One need not be doctrinaire or inflexible in reflecting those values in policy, but as Brands and Cooper argue, it would be playing into Beijing’s hands to do otherwise. ​​​​Read More →