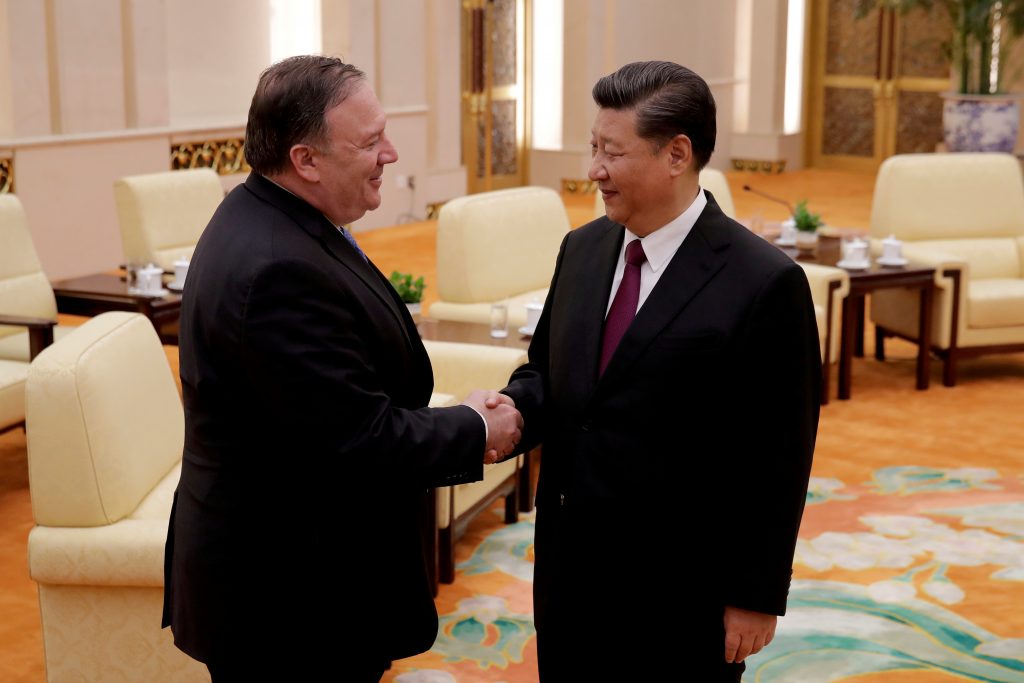 China is creating new facts on the ground, expanding its influence across the world – from the Balkans to the South China Sea – as the United States wrestles with the myriad distractions of coronavirus, recession, racial upheavals and presidential elections.

China also this week created a new fact in the Pacific Ocean. Voters in the Republic of Kiribati, who gained their independence from the United Kingdom in 1979, solidly returned President Taneti Maamau to power. That rewarded his campaign built on embracing Beijing and discarding diplomatic relations with Taiwan.

Captain James Cook, who “discovered” Kiribati’s Christmas Island on Christmas Eve of 1777, would be rolling in his watery grave. The atoll he claimed for the British could someday host port facilities for Chinese tourists or, more to the point, warships.

Seen in isolation, it’s easy to understand why this exotic story got so little attention this week. However, Kiribati has a deeper meaning, and it’s not only for its geographic setting 1,300 miles south of Honolulu, as the only country in the world whose pieces are scattered in all four hemispheres and across 1.3 million square miles.

The election was one more of many signs (see my column of May 2nd) that China sees the current global situation, accelerated by COVID-19′s outsized blow to the United States, as a unique moment to gain global influence at Washington’s expense. Kiribati helps that effort in two respects: narrowing the number of countries in the world recognizing Taiwan to just 15 and expanding its presence in waters dominated by U.S. Indo-Pacific Command.

And that brings me to the stale debate in Washington over whether President Xi Jinping, the most dominant Chinese leader since Mao Zedong, wants President Donald Trump or former vice president Joe Biden to win November’s presidential elections, and might he tilt everything from trade decisions to intelligence operations to extract his preferred outcome.

The reality is that President Xi has already decided who he prefers to be the victor in our 2020 elections – and that would be China.

We’re in the systemic struggle of our age, and the U.S. democratic system is facing one of the great stress tests of its history without any certainty about the outcome. The situation is bound to get messier through the elections and, perhaps, far beyond.

The United States won its global role on the attractiveness of its values and the effectiveness of its institutions, charms that were tarnished even before the country’s worst-in-class performance in the face of coronavirus. Deaths this week in the U.S. hit a world record 127,000, and new COVID-19 cases passed the 40,000 mark for the first time on Friday, leaving allies around the world bewildered about their favorite superpower.

Chinese leaders are telling their global partners this confirms further that the United States is a declining leader with a faltering model. Beijing underscores the value of their brand of leadership, which focuses more on being at the center of global influence that on being atop the heap.

Over time, the United States may well self-correct, as it has done so often in history. It’s also true that China continues to hurt its global cause through overreach, unfair trade practices and diplomatic bullying.

This week also produced new signs that Europe has grown warier of the Chinese embrace. “We continue to have an unbalanced trade and investment relationship,” said Ursula von der Leyen, European Commission president, after a summit with Chinese leaders. She pressed Beijing to deliver on last year’s commitments on market access and to close negotiations on an investment agreement.

At the same time, U.S. Secretary of State Mike Pompeo surprised his European partners on Thursday by accepting their proposal, which he had seemed cool on earlier, to launch a new U.S.-EU dialogue on China. Josep Borrell, the EU’s de facto foreign minister, raised the idea earlier in the week but soft-pedaled it when it initially seemed the U.S. lacked interest.

The U.S. also recently stepped up military reassurance efforts on behalf of its Asian allies. This month, three U.S. carriers navigated the Philippine Sea and farther east, bringing with them a flock of fighter jets. Congress is working on a Pacific Deterrence Initiative, a special budget that would spend nearly $7 billion over two years aimed, among other outcomes, at bolstering naval forces in the Western Pacific.

Even with all that activity, China remains even busier, seizing opportunities wherever it senses a global leadership vacuum worth filling. In the face of COVID-19, it has demonstrated a remarkable ability to multi-task. The evidence of that would fill volumes, but here are some fronts worth watching.

Beijing is accelerating its work toward creating a digital currency, planning for the moment that it may be able to shift its creditors to repayment in yuan. Over time, it would hope to curb the power of the dollar in global transactions and to sanction and print money.

Kristine Lee in Politico Magazine reports on how, with the Trump administration’s reduced interest in multilateral institutions, “Beijing has systematically positioned Chinese nationals at the head of a wide range of U.N. agencies.” That reflects “Beijing’s savvy diplomatic maneuvering as a rising power, and its position as the world’s second largest-economy,” she writes.

China also continues to expand its military capabilities in its region, defining 80 new geographic features in the South China Sea as its own, some 55 submerged features, and moving toward the declaration of an Air Defense Identification Zone to tighten its air domain.

Perhaps most crucial to watch is Taiwan. Chinese rhetoric is growing more aggressive, and its military activity in Taiwan’s air defense space is growing more frequent. Beijing has sailed a new aircraft carrier through the Taiwan Strait, and it launched new destroyers last year.

Chinese military leaders have said they’d like to make Taiwan their own by the time of the Chinese Communist Party’s 100th anniversary in July of next year.

It will take a far more focused and consistent Washington, acting with greater cohesion alongside its global allies, to deter any such birthday aspirations.

Also, don’t miss Adam Entous’ compelling read in the New Yorker on Fiona Hill’s journey to, and sojourn in, the White House. Finally, Politico looks at Germany’s growing willingness to lead as it takes the EU

presidency – and the growing attraction of German-language learning in Brussels and beyond. Politico’s Matt Karnitschnig, my long-time Wall Street Journal colleague and top Germany-watcher, senses a sea change in Berlin.

A group of Der Spiegel reporters lay out what they see as “the beginning of a global backlash” against China, quoting Indian geostrategist Brahma Chellaney. Though it’s less than clear that the impact will be meaningful on Beijing’s play for worldwide influence.

The reporters begin their narrative in the Galway Valley of the Himalayas, where China and India faced off this month, the first time in a half-century that their rivalry has cost human lives. They trace the toughening of Chinese rhetoric from diplomats who once openly showed affection for the West to the so-called “Wolf Warriors” of today.

Yet even as they report on “political headwinds” from world governments and parliaments, they close with the reality that German Chancellor Angela Merkel, in deference to German business, won’t follow the Washington hard line as she makes relations with China the cornerstone of her EU presidency for the next six months. Read More →

#2. WHAT’S BEHIND THE INDIA-CHINA CLASH?

American scholar Taylor Fravel provides a useful prism through which to understand what ties together China’s recent clash with India, its tougher approach to Taiwan and Hong Kong and its continuing efforts to expand its military control over the South China Sea.

It’s all about President Xi’s obsession with sovereignty, he argues, which has increased during the pandemic. “Chinese officials worry that moderation and restraint might signal weakness both to domestic elites, who might question the leadership of president Xi Jinping, and to foreign countries embroiled in disputes with China,” he writes.

That also explains “China’s bristling response to what it views as an Indian provocation in their long-standing dispute.” Read More →

Former national security advisor H.R. McMaster, who is also an Atlantic Council board member, lays out in Foreign Affairs the best argument I’ve read countering a rising conventional wisdom on behalf of American retrenchment – what he calls the Iraq-Afghanistan syndrome.

“…although advocates of retrenchment often identify as realists,” he writes, “they subscribe to the romantic view that restraint abroad is almost always an unmitigated good. In fact, disengagement from competitions overseas would increase dangers to the United States; the paltry savings realized would be dwarfed by the eventual cost of responding to unchecked and undeterred threats to American security, prosperity, and influence.“

His view may be tested soon in Afghanistan, where he argues U.S. disengagement “can make a bad situation worse” and “allow the Taliban, al Qaeda, and various other jihadi terrorist to claim victory, recruit more young people to their cause, gain control of more territory, and inflict suffering through the imposition of draconian sharia.” Read More →

Like many who follow Russian matters from Washington, I have known Fiona Hill for many years and like and respect her for her intellect, integrity and independence.

Like many living in these unconventional Trump administration times, I also can’t get enough of the insider stories from this White House. At their best, they are what the publisher Philip L. Graham called “the first rough draft of history.”

In that spirit, savor Adam Entous’ implausible yarn on the life and times of Fiona Hill in the New Yorker, built off two dozen conversations. It’s riveting stuff how this daughter of a miner and midwife from northern England became a U.S. national intelligence officer and then landed in the national spotlight with her stark Trump impeachment testimony. Read More →

Germany’s six-month EU presidency begins this week at a historic moment. Politico’s Matthew Karnitschnig argues that Berlin is acknowledging “what some European thinkers have been saying for years: The EU won’t survive without more forceful German leadership.”

Chancellor Angela Merkel put it this way in laying out her plans for the presidency: “How Europe fares in this crisis compared to other regions of the world will determine both the future of European prosperity and Europe’s role in the world.” Read More →

Also don’t miss Joshua Posaner’s lighter piece in Politico about the much-increased demand for German language lessons in Brussels – and, for that matter, in many other parts of Europe.  Berlin’s growing influence seems to be outweighing Mark Twain’s dismissal of German as a language “only the dead have time to learn.” Read More →

Viel Spaß until next week.

QUOTE OF THE WEEK