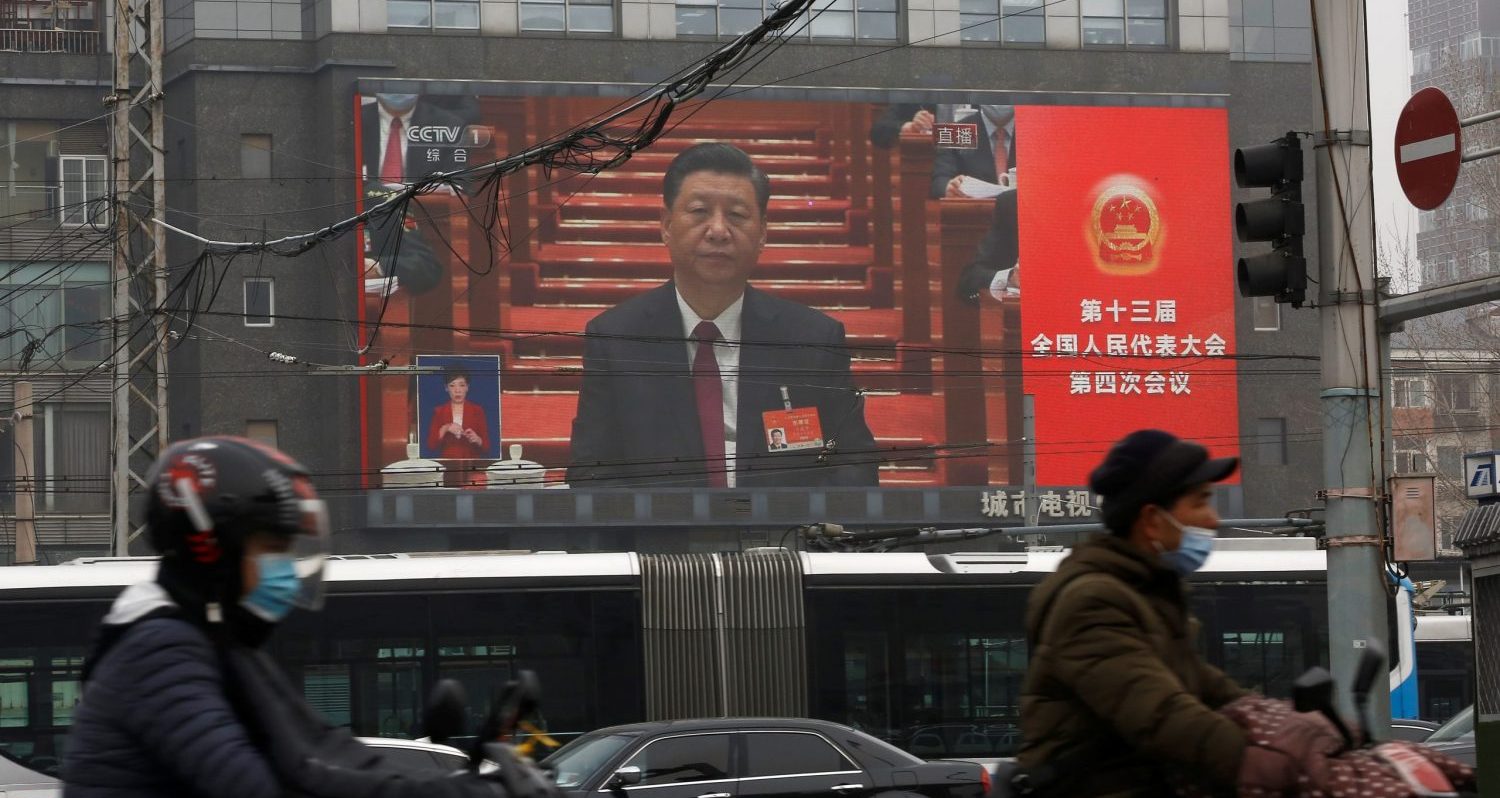 A giant screen shows Chinese President Xi Jinping attending the opening session of the National People's Congress at the Great Hall of the People, in Beijing, on March 5, 2021. Photo via Tingshu Wang/Reuters.

Top US government officials are studying China’s increased diplomatic bravado and growing military assertiveness with all the intensity of elite athletes poring over game films of their most resourceful rival.

From the CIA to the White House, and from the Pentagon to Foggy Bottom, what these officials are reporting is a far greater willingness by China to go on the offensive in the first 100 days of the Biden administration. The Chinese are more ready to push back against real and imagined slights from the United States and its allies, even as they escalate warnings and military activities around Taiwan.

The new messaging from Beijing has been consistent: The Biden administration, in trying to undermine China’s rise, is promoting a false and dangerous narrative of competition between democratic and autocratic systems. Thus, countries around the world must decide whether to follow the divisive but declining United States or embrace a rising, unifying, and nonjudgmental China.

Between the lines, Chinese President Xi Jinping is saying that human-rights violations and democratic failings are internal matters beyond debate. Going beyond that, Chinese officials are ready to publicly attack the US record on racism and democracy, as did Beijing’s top diplomat Yang Jiechi in an unprecedented 16-minute diatribe to open the first high-level US-Chinese talks of the Biden administration on March 18 in Anchorage, Alaska.

“Recently, some people tend to describe China-US relations as ‘democracy versus authoritarianism,’ seeking to…pin labels on countries,” said Wang Yi, the Chinese foreign minister, building on the Alaska message last week at the Council on Foreign Relations. “But democracy is not Coca-Cola which, with the syrup produced by the United States, tastes the same across the world.”

Said Wang, “using democracy and human rights to conduct values-oriented diplomacy, meddle in other countries’ internal affairs or stoke confrontation will only lead to turmoil or even disaster.”

His use of the term “disaster” caught his listeners’ attention, and he made clear what he meant by that.

“The Taiwan question is the most important and sensitive issue in China-US relations,” he said, arguing that it should also be in the United States’ interest to oppose Taiwanese independence and separatist instincts. “Playing the ‘Taiwan card’ is dangerous, like playing with fire.”

A cocktail of hubris and insecurity

Such rhetorical and potentially strategic shifts do not happen by accident in (yes) authoritarian China. So it’s both urgent and necessary to understand their meaning and respond appropriately. That will not be easy, given the contradictory mix of hubris and insecurity in the latest Chinese moves and measures.

On the one hand, Xi is projecting a growing national confidence that this is China’s historic moment. Xi hopes to build on what he sees as game-changing momentum in this centennial anniversary year of the Chinese Communist Party, having emerged from the pandemic and having declared the end of absolute poverty in the country.

At the same time, Xi is responding to new challenges from the Biden administration, which itself is escaping rapidly from COVID-19 through impressive vaccine distribution and by pumping $4 trillion and counting of stimulus and infrastructure development into the economy. US growth could match or be greater than that of China this year at a remarkable 6.5 percent.

Where the two countries’ leaders appear to agree is on the fact that “we are at an inflection point in history,” as President Joe Biden told a joint session of Congress last week. “We’re in a competition with China and other countries to win the 21st century.”

President Xi framed it differently earlier this year, speaking to a Communist Party school session: “The world is undergoing profound changes unseen in a century, but time and the situation are in our favor. This is where our determination and confidence are coming from.”

In Biden, however, Xi sees a more methodical and coherent leader than was his predecessor, one more willing to work within institutions and alongside allies.

Biden on March 12 convened the first leader-level summit of the Quadrilateral Security Dialogue, or Quad, bringing together Japanese, Australian, and Indian leaders. Japanese Prime Minister Yoshihide Suga then on April 16 was the first foreign leader to visit the White House since Biden took office, and the two leaders issued the first joint statement in support of Taiwan since 1969.

Chinese leaders also were caught off guard on March 22 when the United States, the European Union, Britain, and Canada imposed sanctions on Chinese officials for human-rights abuses against the Uyghur minority in Xinjiang. Beijing’s response was immediate, and seemingly counterproductive, slapping broader punitive measures against EU individuals. The price of its tough message is that the European Parliament has put the recently announced Chinese-EU investment agreement on ice.

There seem to be three immediate targets for China’s current approach: the domestic audience, US partners and allies, and the developing world.

Any authoritarian leader’s priority is political survival. President Xi appears to have strengthened his hand within the Chinese Communist Party, and weakened potential rivals, through nationalist rallying around Hong Kong and Taiwan, and through portraying the United States as a power determined to reverse China’s rise.

The second target for Chinese bravado is a pre-emptive effort to reach US allies and partners before the Biden administration has had sufficient time to galvanize greater common cause. Wherever necessary, it wants to demonstrate that there will be a steep price for those who embrace Washington at Beijing’s expense. One US official quotes a Chinese saying to explain this strategy: “Kill a chicken to scare the monkey.”

President Xi’s third target is the developing world, where Chinese inroads have been greatest. The aim here is to portray China as a more reliable and consistent partner for these countries’ development, with its own inspiring track record of modernization and commitment to stay out of other nations’ internal affairs (and, indeed, supply fellow authoritarians with the surveillance tools to remain in power).

At the same time, of course, China is also testing the Biden administration. The aim is not to win over Washington, where the consensus about the Chinese challenge has been growing. Rather, it is to test the willingness of the Biden administration to act on any number of issues—ranging from technology controls to human rights—but most significantly regarding Taiwan.

Beijing is wagering, from previous experience, that President Biden’s bark will be worse than his bite. If convinced of that, count on even more Chinese bravado and assertiveness over the next four years.

For President Xi, the Belt and Road initiative (BRI) lies at the center of his ambition to expand China’s economic and geopolitical reach. For many of China’s overseas migrant workers, however, the working conditions are a nightmare, made worse by the pandemic.

In the Washington Post, Lily Kuo and Alicia Chen brilliantly detail the human cost of working inside the BRI construction sites. They describe the experience of Ding, a 40-year-old native of Henan province, who for months ahead of his escape “was locked in a 170-square-foot workers’ dormitory near a Chinese smelting facility” in Indonesia.

The authors’ interviews with labor-rights advocates and a dozen Chinese workers “reflect a pattern of abuse that threatens to undermine China’s ambitious bid for diplomatic and economic influence.” The horror stories also litter a recent report by the New York-based China Labor Watch. ​​​​​​Read More →

“We’re at a great inflection point in history,” said President Biden in his first address to a joint session of Congress. Though the speech was largely on domestic affairs, writes David Sanger, Biden “justified his broad vision to remake the American economy as the necessary step to survive long-run competition with China.”

As compelling as this argument is, recent presidents have fallen short when they have tried to revive a unifying national spirit around a foreign challenge. Sanger reckons Biden is betting his historic legacy that he can do so, as the country “must compete with a rising power in China, while containing a disrupter in Russia.”

Writes Sanger, “Whether he can turn both the country and America’s allies to that task, his aides acknowledge, may well define his presidency. But even some Republicans think he has a shot.” Read More →

#3 How TSMC has mastered the geopolitics of chipmaking
THE ECONOMIST

I was delighted to see the Economist weigh in on one of the most fascinating and geopolitically significant business stories of our times. The Taiwan Semiconductor Manufacturing Company (TSMC) controls 84 percent of the global market for the chips that power the world’s biggest tech brands, from Apple in the US to Alibaba in China.

“The most serious danger to TSMC comes from the Sino-American ructions,” writes the Economist. “The rival powers have so far refrained from interfering with TSMC directly, perhaps concluding that this is the most reliable way of achieving their technological objectives. If the chipmaker’s importance keeps growing, one of them may decide that it is too valuable to be left alone.”

Keep your eye on TSMC as a bellwether for the future. Read More →

#4 Why are the Russians pranking Washington think tanks?
Melinda Haring and Damon Wilson / THE WASHINGTON POST

After considerable reflection, we at the Atlantic Council decided to tell the story of a fake message we received in early April claiming to come from Leonid Volkov, the chief of staff to imprisoned Russian opposition leader Alexei Navalny.

“The people who sent it were trying to lure us into a potentially sensitive or even embarrassing online conversation,” write the Atlantic Council’s Melinda Haring and Damon Wilson. They put the story in the context of other such increasingly frequent spear-phishing attempts.

“Exposing this latest phishing attempt won’t end that,” they write, “but every step we take to make our community less vulnerable and more resilient and aware will make it harder for the Kremlin and other mischief-makers to discredit their perceived adversaries.” Read More →

#5 ‘I’d Never Been Involved in Anything as Secret as This’
Garrett M. Graff / POLITICO

Ten years ago, President Barack Obama announced to the world that a team of US Navy SEALs had executed America’s most wanted terrorist—Osama bin Laden—in Abbottabad, Pakistan.

Marking the anniversary, Garrett Graff delivers this week’s must-read for Politico magazine, a remarkable oral history of the event from the perspective of the small group of people who were involved in the decision-making.

“The full story of how, and why, America’s top security officials decided to pull the trigger that night in May has never been told,” writes Graff.  So don’t miss a word of this oral history, based on extensive original interviews with nearly 30 key intelligence and national security leaders, White House staff, and presidential aides—some of whom have never spoken publicly about it before. Read More →

Adding an Ishmael Track to the Abraham Accords: How to pursue détente between Iran, Saudi Arabia, and the UAE

Most Middle East observers thought that they would never see normalization between Arabs and Israelis in their lifetimes. Now that we have seen this step taken—this chasm jumped—there is no reason not to envision Arab-Iranian normalization if the regimes prioritize long-term national interests like their economies, their self-sufficiency, and the future well-being of their publics. This roadmap is theirs for the taking.

Putin has instructed Kremlin officials to draw up a list of “unfriendly countries.” Although the identity of these countries is unconfirmed, media reports suggest the list will be dominated by Russia’s neighbors.

Policymakers must make specialized hardware and software a core component of their strategic planning in order to fully realize the economic windfall of AI.