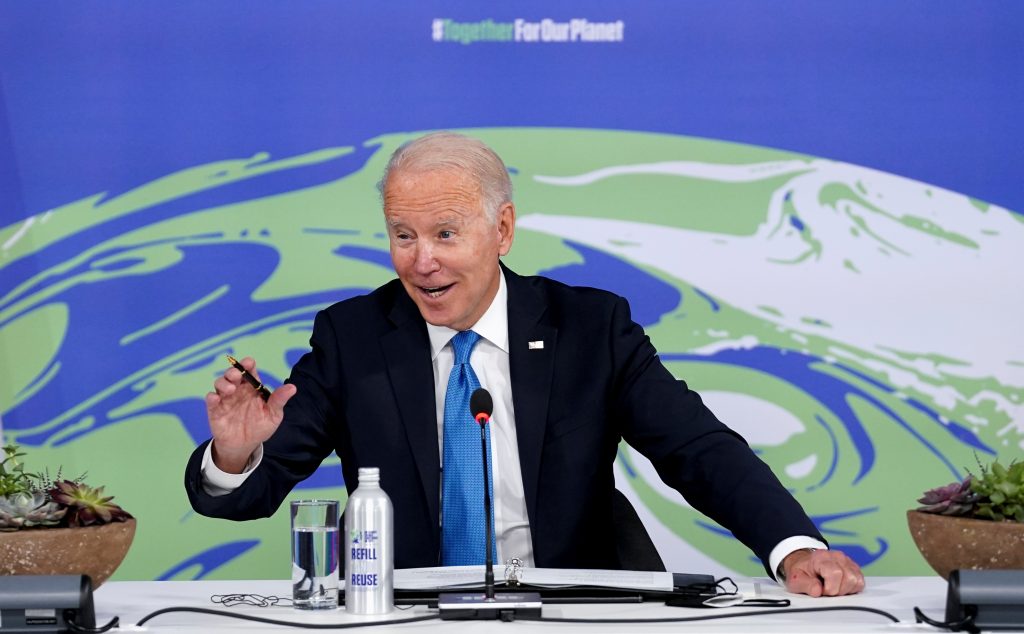 Forgive senior Saudi officials for their head-scratching in response to the simultaneous and seemingly contradictory demands from the Biden administration that Riyadh’s royals pump more oil into the world economy while reducing carbon emissions.

In my travels over the last two weeks—first to Riyadh to hear Minister of Energy Prince Abdulaziz bin Salman commit Saudi Arabia to net-zero carbon emissions by 2060, and then to Glasgow for the United Nations Climate Change Conference of the Parties (COP26)—you could feel the reverberations from the first energy price shock of the green era.

The domestic and international politics of rising energy prices, with the cost of a basket of fossil fuels having doubled since May and with blackouts in China and India, are colliding with the longer-term certainty that global leaders must more effectively address the dangers of a warming world.

I returned home this weekend to Washington with three convictions:

The future is fossil, too

The painful lesson of the past few weeks is that you can’t take fossil-fuel supply off the market when energy demand is rising and the clean-energy replacements aren’t yet sufficient.

“The world has sleepwalked into the supply crunch,” Sultan Ahmed al Jaber, special envoy for climate change of the United Arab Emirates, said in Riyadh. His country was ahead of all other Persian Gulf oil-producing states in setting a net-zero target for 2050. Despite that, he said, “A transition means a transition. It takes time.”Minister al Jaber says the lesson he draws from the current energy scare is that even as the world rushes toward renewables and decarbonization, the reality is that fossil fuels remain 80 percent of the energy mix and some 60 percent comes from oil and gas alone, which he calls “the spinal cord of our ability to meet the global energy requirements of the future.”

What the Economist has called the energy “panic” has “exposed deeper problems as the world shifts to a cleaner energy system, including inadequate investment in renewables and some transition fossil fuels, rising geopolitical risks and flimsy safety buffers in power markets. Without rapid reforms, there will be more energy crises and, perhaps, a popular revolt against climate policies.”

On climate adaptation versus mitigation, the UN Environment Program this month published a report concluding that the growth in climate impact is far outpacing efforts to adapt, a reality that hits developing countries hardest.

The Atlantic Council has taken on the myriad ways of mitigating climate change and slowing the rise of global temperatures through the cutting-edge work of its Global Energy Center.

At the same time, the Council’s Adrienne Arsht-Rockefeller Foundation Resilience Center has been a world leader on questions of climate adaptation. One of its most significant recent initiatives has been to inspire cities and communities around the world to appoint chief heat officers (CHOs) and name heat waves to address the danger.

Miami-Dade County in Florida, for example, moved to hire Jane Gilbert as its first CHO, which has now been followed by similar appointments in Athens, Greece; and Freetown, Sierra Leone.

If you think that doesn’t matter, consider this. A study by the Resilience Center and Vivid Economics found that extreme heat deaths could skyrocket more than sixfold—to fifty-nine thousand Americans per year—by 2050 without climate adaptation measures.

“It just is a gigantic issue, and they walked away,” Biden told journalists before flying home from Glasgow. “How do you do that and claim to be able to have any leadership?”

At the same time, President Biden’s own advisers know that how he handles energy prices, and the resulting inflation, might shape his and his Democratic Party’s future more than his climate policies or his Afghan travails.

Whether in the Saudi desert or the Scottish highlands, the reality is that the fossil-fuel advocates and the climate utopians must find a middle ground. The enormity of the climate danger demands an energy transition, but it won’t be achieved without oil and gas, without huge investments in climate adaptation, and without the messy, inescapable realities of global and local politics.

#1 Xi Is Running Out of Time
Daniel Rosen | FOREIGN AFFAIRS

Following up on his superb column earlier this year on President Xi’s rising economic problems after Xi cracked down on a wide array of tech companies, the Atlantic Council’s Daniel Rosen writes that his concerns have grown that China’s economy can’t avoid a “hard landing.”

The energy crisis has exacerbated problems resulting from China’s retreat from economic reforms.

“Under pressure,” Rosen writes, “and lacking immediate options to improve energy efficiency, many [Chinese] officials ordered businesses to shut down to reduce the demand for power. Energy shortages cut industrial production, even in the thriving export industries that are the main bright spot in the Chinese economy today, including manufacturers of smartphones and automobiles.” Read more →

For more excellent reporting on China, check out the FT “Big Read” on how President Xi has gone from framing himself in 2017 in Davos as the new global leader to his current bout of self-isolation in the face of COP26, COVID-19, energy shortages, and the Biden administration’s rallying of partners and allies.

“[F]or many experts,” they write “Xi’s decision to stay at home since the start of the pandemic reflects a deeper shift: China, responding to acute domestic pressures and mounting hostility abroad, appears to be turning inward.”

So here’s the question they pose: “Just how far can China retreat back into its shell? And what might this trend mean for engagement—across business, climate change, geopolitics and culture—with the world’s most populous country?” Read more →

#3 The uses and abuses of green finance
THE ECONOMIST

The Economist warns that hopes for green finance as a means to solve climate change are overblown, and that a difficult future for battling climate change lies ahead.

“The Economist estimates that listed firms which are not state-controlled account for only 14-32% of the world’s emissions,” the magazine notes. Instead, “State-controlled companies, such as Coal India or Saudi Aramco, the world’s biggest oil producer, are a big part of the problem and they do not operate under the sway of institutional fund managers and private-sector bankers.”

With that in mind, there are still options. Among other things, the Economist argues, “Fine-tuning can help. Measurement should be improved. The EU is rolling out mandatory carbon reporting for businesses; America is considering it.” Read more →

“Rather than focusing on persuading Beijing to sign vague, nonbinding pledges,” Rogin writes, “the Biden administration should be focused on building out a domestic climate change industry whose supply lines don’t run through China.” China, for its part, “will pursue its own development on its own terms. It’s hubristic to think we can change that in the near term.”For a deeper read on China, don’t miss Rogin’s new book: Chaos Under Heaven: Trump, Xi, and the Battle for the Twenty-First Century. Read more →

In this entertaining and insightful debate, one of a series in Foreign Policy between the Atlantic Council’s Matt Kroenig and Emma Ashford, they discuss the effectiveness of the COP26 conference and the broader strategic questions of the US-China relationship.

“More broadly,” Ashford argues, “China definitely remains the biggest climate change problem to resolve. Keep in mind that in the run-up to Glasgow, Beijing made no new climate commitments and instead just reiterated existing policies, such as limiting global warming to under 2 degrees Celsius and shifting to a better mix of renewables and nuclear power rather than the country’s current coal-heavy energy mix.”

“The real problem with China,” Kroenig responds, “is its reliance on dirty sources of energy, but I agree that it is not easy to bring down emissions anywhere; populations worldwide like an improved standard of living, running a modern economy requires energy, and renewables have not yet risen to the challenge.”

Read their debates regularly for a civilized, intelligent sparring on the key issues of the day. Read more →

The People’s Liberation Army (PLA) could field one thousand nuclear warheads by 2030. What should the US do about it?

Image: US President Joe Biden participates in a meeting on the Build Back Better World (B3W) initiative during the UN Climate Change Conference (COP26) in Glasgow, Scotland, Britain, on November 2, 2021. Photo by Kevin Lamarque/Reuters.