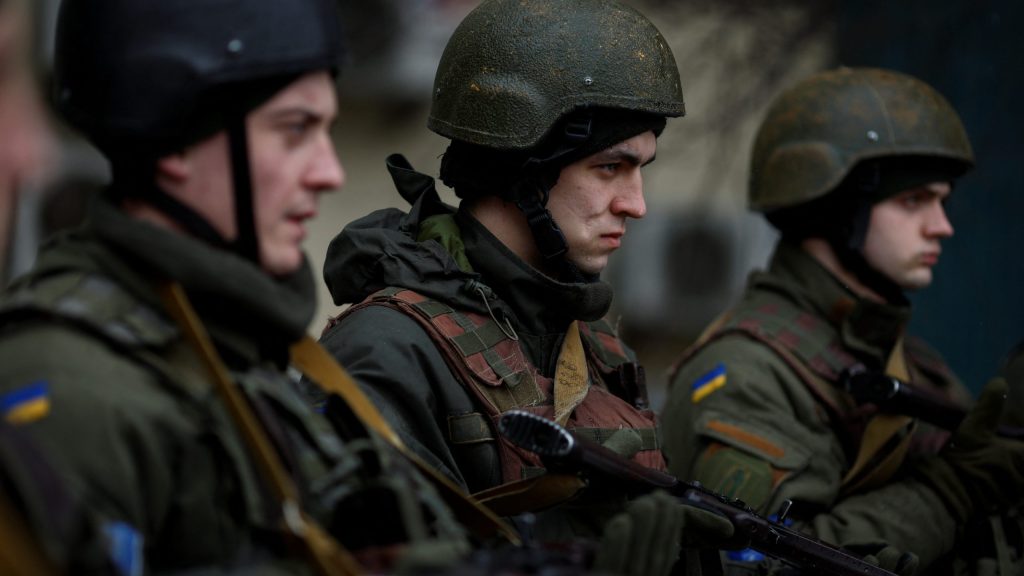 It isn’t yet enough.

The impressive deliveries of defensive weapons to Ukraine’s military, though crucial to the country’s remarkable resistance, have failed to stop Russian President Vladimir Putin’s mounting air strikes on civilian targets and urban centers.

The unprecedented economic and financial sanctions on Russia, though historic in their scope, have been insufficient to deter him from escalating his grinding war on Ukraine.

The unanticipated transatlantic and international unity—including a 141-5 resolution of the United Nations General Assembly demanding Putin withdraw his forces—hasn’t dissuaded him either. What greater sign could there have been that Putin has made himself a pariah than the quartet that voted with him: Belarus, North Korea, Eritrea, and Syria?

Too many countries in the world continue to look away. Thirty-five of them abstained from condemning Russia at the United Nations, hoping Putin’s ugliness would pass without forcing them to take a stand against this international crime.

The efforts of the United States and some of our international partners to shame Chinese President Xi Jinping into pulling his support from Putin’s war machine also have failed—though no other country’s actions at this moment could do more to save lives and end the war.

Ahead of the Winter Olympics in Beijing, Putin effectively received Xi’s green light for his invasion in their 5,300-word joint statement, which said their relationship had “no limits.” Putin kept his part of the bargain: not invading until the games ended. For his part, Xi doesn’t yet seem willing to distance himself from Putin in any meaningful way.

What the civilized world has done thus far to respond to Putin’s invasion is a remarkable show of unity. The Biden administration deserves credit for releasing intelligence on Putin’s plans early, thus focusing the narrative and blame where it belongs, and then rallying the world thereafter.

Europe’s combined actions against Putin are particularly impressive, given its proximity to Moscow and dependence on Russian energy. Germany did more in a weekend to counter Russian revanchism than it has in the previous two decades—by reversing a ban on selling weapons to Ukraine, significantly increasing its defense spending to more than 2 percent of GDP, and announcing a $112 billion defense spending plan in the 2022 budget.

If all that remains insufficient to change Putin’s course, the only responsible choice is to do more, and to do it quickly: more sanctions, more military support, and more international unity.

There are two compelling reasons.

The second is the historic imperative: the need to reverse a global trajectory that could allow brutal authoritarianism, or bloody chaos, to shape the global future.

“Vladimir Putin’s invasion of Ukraine has ended Americans’ 30-year holiday from history,” writes former US Secretary of Defense Robert M. Gates in the Washington Post. “For the first time since World War II, the United States faces powerful, aggressive adversaries in Europe and Asia seeking to recover past glory along with claimed territories and spheres of influence. All in defiance of an international order largely shaped by the United States that has kept the peace among great powers for seven decades. The Russian and Chinese challenge to this peaceful order has been developing for a number of years. Putin’s war has provided the cold shower needed to awaken democratic governments to the reality of a new world, a world in which our recent strategy — including the ‘pivot’ to Asia — is woefully insufficient to meet the long-term challenges we face.”

It is clarifying and galvanizing to view Putin’s war on Ukraine in these terms: not as a dangerous episode, but as an epochal challenge.

With that in mind, what should be done?

The Atlantic Council’s Scowcroft Center for Strategy and Security provided some actionable ideas through a survey of thirty-seven leading national-security experts. They assessed the options by weighing the positive benefits of each against its risk of escalation.

Beyond that, I also favor a partial no-fly zone over the westernmost regions of Ukraine, close to the Polish, Slovakian, Hungarian, and Romanian borders. One can understand why the United States and NATO reject a no-fly zone over the whole of Ukraine; but in western Ukraine, it is a humanitarian imperative and also militarily easier, as it’s closer to western air bases. It would demonstrate our resolve to Putin.

At the same time, the United States, Europe, and their global partners should add to the impressive array of sanctions against Russia.

Their impact thus far, according to the Council’s Brian O’Toole and Daniel Fried, “has been to flatten the Russian financial system, crash the ruble, spur a likely sovereign default, and probably move the Russian economy into a depression.”

Yet as Putin’s forces continue their attack, O’Toole and Fried provide a menu (in ascending order of impact) of potential next steps: expanding the sanctions against Putin’s cronies and subordinates; extending sanctions on more banks and key companies (they suggest Gazprombank, Russian Agricultural Bank, AlfaBank, Sovcomflot, Russian Railways, and the diamond company Alrosa); and blocking the Russian government by sanctioning all Russia-state-owned companies. And if all else fails, enacting a full financial embargo that would ban all transactions, exports, and imports with Russia.

What’s not in doubt is that Putin will continue to escalate if more isn’t done to stop him.

“I think Putin is angry and frustrated right now,” CIA Director William Burns told the House Intelligence Committee last week. “He’s likely to double down and try to grind down the Ukrainian military with no regard for civilian casualties.”

Putin has lost: He will never be able to entirely pacify and occupy Ukraine, and he has done generational damage to the Russia whose power and prestige he was once determined to build.  However, his opponents have not won: Saving Ukraine, and sustaining their newfound common cause, is the key to shaping the global future.

What has been accomplished against Putin thus far is remarkable, but it is still insufficient.

#1 In the Rubble of Kharkiv, Survivors Make Their Stand: ‘It’s a War, and its a Dirty War’
Yaroslav Trofimov | THE WALL STREET JOURNAL

Yaroslav Trofimov’s heartbreaking, powerful reporting from Kharkiv underscores the brutality of the Russian invasion of Ukraine, as Putin—frustrated and humiliated by the failure of his army to secure a swift victory—turns increasingly to the same brutal tactics he employed in Chechnya.

“Burned-out, shrapnel-peppered cars, the remains of their occupants melted into the seats, dot the streets,” Trofimov writes. “Twisted pieces of roofing hang from electricity lines. Inside the regional administration’s courtyard, a giant crater marked the spot where a Russian missile vaporized an ambulance.”

Elsewhere, he writes of tragic and courageous men and women thrust into extraordinary circumstances—from a neurosurgeon who has barely left the hospital for days, to a seven-year-old drawing pictures of his poodle on the wall of a subway station-turned-bomb shelter.

Trofimov concludes with a quote from Kharkiv’s mayor, summarizing the desperation and courage of the situation: “We will never surrender,” he said. “But now, the main task is to make sure our people stay alive.” Read more →

#2 The Stalinization of Russia
THE ECONOMIST

Putin, The Economist writes, is re-Stalinizing Russia with an extraordinary brutality as he doubles down on the gigantic mistake he made in invading Ukraine.

“The truth,” it argues, “is sinking in that, by attacking Ukraine, Mr Putin has committed a catastrophic error. He has wrecked the reputation of Russia’s supposedly formidable armed forces, which have proved tactically inept against a smaller, worse-armed but motivated opponent.”

And now, like Stalin, “Mr Putin is destroying the bourgeoisie, the great motor of Russia’s modernisation.” But unlike the Soviet dictator, the newspaper continues, Putin has neither a growing economy from which to draw, a vicious foreign invader against which to unite the country, nor even a coherent ideology.

Still, it cautions, “However much the West would like a new regime in Moscow, it must state that it will not directly engineer one. Liberation is a task for the Russian people.” Read more →

To understand the position in which Putin’s invasion of Ukraine has placed China, read this smart, well-reported Financial Times analysis.

It finds that “as Russia has intensified its bombardment of urban areas, [Chinese President Xi Jinping] has found himself facing the potential for two interlocking crises. As the biggest importer of oil and a big buyer of food from around the world, China’s economy is very exposed to the market turmoil that the war and subsequent sanctions have unleashed. It also risks a deep diplomatic backlash, especially in Europe, where many see it as little short of an accomplice to the invasion.”

Yet Putin and Xi—“the tsar and the emperor,” according to Moscow-based analyst Alexander Gabuev—are personally close. In the words of China expert Sheena Greitens, it means that “even if some Chinese officials did want to recalibrate relations with Russia, they would struggle precisely because Xi has put a ‘very personal stamp’ on Sino-Russian relations.” Read more →

The Journal’s Weekend Interview by Tunku Varadarajan, who spoke with Atlantic Council nonresident senior fellow Edward Fishman, is a worthwhile read about how Vladimir Putin—who thought he had sanction-proofed himself—had instead left himself vulnerable. Those sanctions included measures against the Central Bank of Russia, which Fishman described as “the largest entity ever targeted by sanctions in history.”

His take on the sanctions against Russia is a fascinating one. He argues that they were only made possible by a European consensus and were well-prepared in advance as Putin’s invasion plans unfolded like “a slow-moving train wreck.”

Still, Fishman doesn’t believe the measures will make the Russian leader change his mind. “The best hope was to stop Mr. Putin before he made the decision to invade,” Varadarajan writes. “Now it’s time to turn to the longer-term goal of sanctions—economic and technological attrition, which is also more practical than any attempt to reshape Mr. Putin into a more conciliatory invader.” Read more →

#5 The West Has Declared Financial War on Russia. Is it Prepared for the Consequences?
Julia Friedlander | POLITICO

“Every morning since Russia’s invasion of Ukraine, when markets open,” writes the Atlantic Council’s Julia Friedlander, “analysts watch two things simultaneously: the advance of Russian troops on one screen and the value of the ruble on the other, two battle fronts in the same confrontation.”

Friedlander provides the best stand-back analysis I’ve read about the unprecedented use of sanctions “to change military strategy in a war that is already happening.” She writes: “Never have sanctions played out like they are right now, a high-stakes gamble over European security, in real time, through financial and economic means. The moves are all the more surprising given that the Biden administration telegraphed a more restrained approach to sanctions when it first came into office.” Read more →

By the Atlantic Council

Foreign Secretary Liz Truss warned that Putin has shaken the global security architecture by invading Ukraine and declared the “era of complacency” over.

Image: Ukrainian servicemen attend a prayer service before being blessed before going into battle against Russian forces in Kyiv, Ukraine, on March 13, 2022. Photo by Thomas Peter/REUTERS