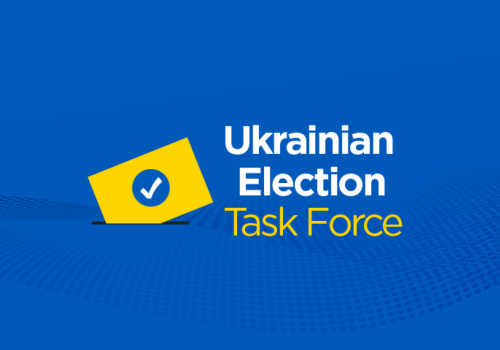 On April 1, the Eurasia Center hosted a public event discussing the first round of the Ukrainian presidential elections. The 2019 presidential election has been a pivotal event in Ukraine’s history. Anticipating attempts at outside interference in the election, the Atlantic Council, the Victor Pinchuk Foundation, and the Transatlantic Commission on Election Integrity established a […]

Russian President Vladimir Putin’s persistent efforts to influence the domestic politics of his neighbors and countries well beyond Russia’s borders have posed enormous challenges in Europe and across the Atlantic. More than any other country, Ukraine has been the unwanted recipient of Moscow’s attention, particularly during the past five years. The Kremlin has sought to […]

Laura Galante is a nonresident senior fellow at the Cyber Statecraft Initiative of the Atlantic Council’s Scowcroft Center for Strategy and Security, as well as the Eurasia Center. Laura analyzes how states use cyberspace, or more precisely, our information space. She describes a domain where militaries, intelligence services, criminal groups, and individuals actively pursue their interests—with far fewer restraints than in the physical world.

A leading voice on information operations and intelligence analysis, she founded Galante Strategies in spring 2017 to assist governments and corporations in analyzing and responding to cyber and information threats.Previously as Director of Global Intelligence at the cybersecurity company FireEye Inc., her teams investigated network activity, profiled and attributed advanced cyber threats. A founding member of the Mandiant (FireEye-acquired) Intelligence, her work has included leading strategic analysis, developing intelligence capabilities and offerings, and directing publications including: APT28: A Window into Russia’s State Cyber Espionage; Red Line Drawn: China Recalculates its Use of Cyber Espionage; and Hacking the Street? FIN4 Likely Playing the Market among others.Prior to her work at FireEye and Mandiant, Laura led a contractor team analyzing cyber capability development and military doctrine at the US Department of Defense. She supported the 2010 US-Russia bilateral information security talks.Laura gave a TED talk at TED2017, has appeared before the UN Security Council’s meeting on cybersecurity and international peace and security in 2016, and has spoken at the request of the State Department on cybersecurity in Serbia and Kosovo.

She frequently appears on and provides commentary to: CNN, Bloomberg, NPR, BBC, the New York Times, the Financial Times, the Wall Street Journal, Reuters, the Associated Press, and other global and industry media.Laura holds a JD from the Catholic University of America, and a BA in foreign affairs and Italian from the University of Virginia. She lives in Virginia with her husband and son.