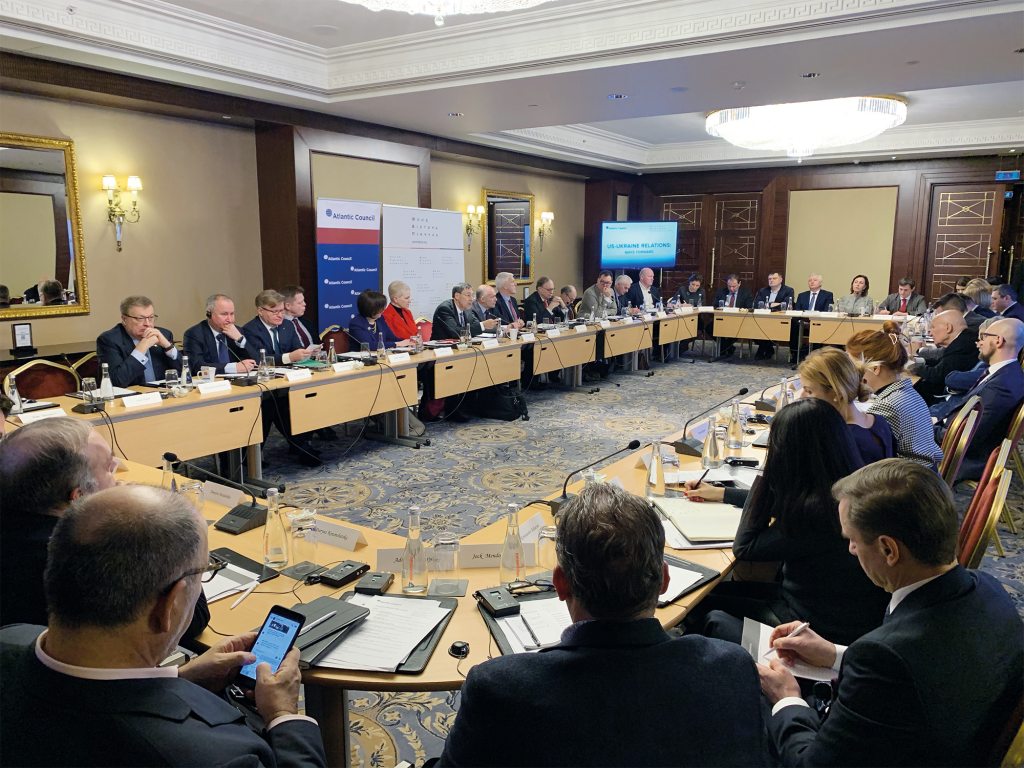 The Eurasia Center advocates for policies that promote stability, democratic values, and prosperity in Eurasia. The year 2020 was marked by dramatic changes that brought renewed urgency to this mission. Ukraine underwent a serious shake-up of its government while Russia amended its constitution to keep President Vladimir Putin in the Kremlin for another generation. Belarus was rocked by one of the most gripping pro-democracy movements in the world, and the South Caucasus was roiled by a bloody war between Armenia and Azerbaijan that altered the region for years to come.

The Eurasia Center’s 2020 was marked by adaptation in adversity—and, ultimately, success in our mission.

In 2020, the Eurasia Center hosted more than ninety events, published six reports and issue briefs, grew its network of partnerships, and utilized the changing realities of remote work to engage top-level leaders and policymakers. The center’s experts published influential op-eds in top outlets, such as the Washington Post, Politico, Forbes, The Hill, Newsweek, NPR, and the National Interest. While much of the center’s international travel was restricted due to the COVID-19 pandemic, the team still managed to conduct a timely reassurance tour in February to Ukraine to spotlight US commitment to the partnership following President Donald Trump’s first impeachment. When a deeply flawed peace plan for the war in Ukraine was unveiled at the Munich Security Conference in February, the Eurasia Center rapidly released a joint letter from top experts and officials in the United States, Europe, and Ukraine to quash it.

The center leveraged the shift to a virtual setting in 2020 by utilizing its convening power to drive public discussion and set the agenda in Washington, Kyiv, and Brussels on the remarkable events in Belarus and other issues. As the crisis in Belarus continued, the Eurasia Center hosted Belarusian opposition leader Sviatlana Tsikhanouskaya for a one-on-one conversation. The same day a cease-fire between Armenia and Azerbaijan was announced, Armenian Foreign Minister Zohrab Mnatsakanyan visited the Atlantic Council’s office for a livestreamed event to discuss the negotiations. Throughout the year, Ukraine’s leaders chose the Eurasia Center as a premier platform to discuss their ideas, including op-eds from President Volodymyr Zelenskyy and Foreign Minister Dmytro Kuleba published in the center’s UkraineAlert blog.

The Eurasia Center also welcomed its third class of Eurasia Congressional Fellows. Last year’s cohort included sixteen fellows from both Democratic and Republican offices in the House and Senate, as well as committee staff. Throughout the year, fellows participated in six roundtable discussions with experts to learn about policy-shaping issues related to the region. In August 2020, the center hosted a virtual study trip to Ukraine, where fellows met with government officials, members of parliament, and civil society representatives in Kyiv.

The new year brings opportunities for the Eurasia Center to proactively shape US policy toward the region as the Biden administration’s policies come into view. In 2021, the Eurasia Center will continue to produce high-impact publications, briefings, and convenings toward that end. In particular, the center will release in-depth strategies for the Biden administration on how to positively influence developments in Belarus, how to fix relations with Ukraine following the turbulence of the previous administration, and how to create a coherent, long-term strategy toward Russia. By utilizing a broad existing network in Washington and a deep bench of expertise, the center’s ability to convene and inform policymakers has never been greater.

Advancing a strong, ambitious Europe and a forward-looking transatlantic partnership.

Image: A roundtable hosted by our Kyiv delegation with top policymakers, lawmakers, and civil society leaders in Ukraine.