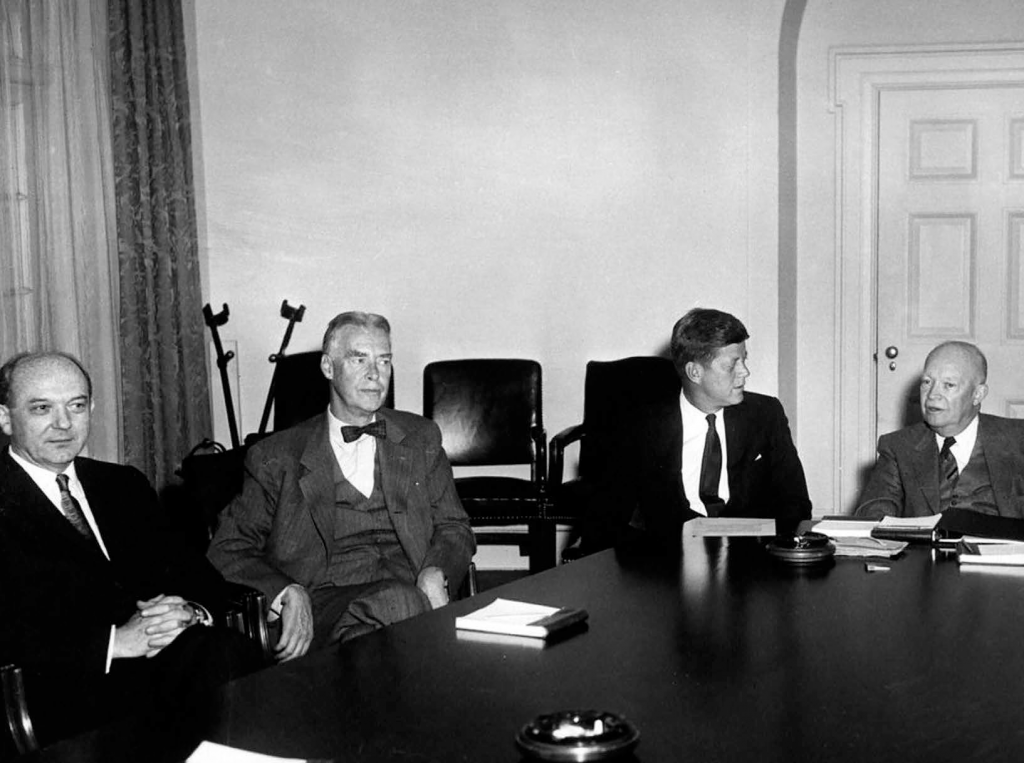 It was July 24, 1961, and Dean Rusk pressed for solutions from the fifteen Atlanticists arrayed around his conference table on the State Department’s executive seventh floor.

As President John F. Kennedy’s relatively new secretary of state, Rusk was confronting mounting challenges to the United States’ post-World War II leadership position. He needed urgent help from this disparate group, a who’s who of American foreign-policy actors affiliated with a confusing variety of organizations.

He told those assembled—among them Dean Acheson, Christian Herter, Henry Cabot Lodge, and Mary Pillsbury Lord—that they had to develop a more coherent voice and organizational structure. Dramatic changes in the international environment demanded it, he said.

The United States had lost the nuclear monopoly that had allowed it to prevail during the 1948–1949 Berlin Airlift, which had broken the Soviet blockade of the free western part of the city. There was talk of a new Berlin crisis that would be even more difficult to manage, as the Soviets and their East German allies sought to shut off a threatening hemorrhage of refugees. Of increasing concern as well, the Soviet Union and its communist ideology were gaining traction across the developing world.

Beyond that, the Kennedy administration was off to a bad start. In April, only three months after coming into office, President Kennedy had botched the Bay of Pigs invasion of Cuba, and he feared that Moscow might try to exploit what it was interpreting as weakness and indecisiveness. Just two months later during a summit in Vienna in June, Soviet leader Nikita Khrushchev had stunned Kennedy with his belligerence, leaving the youngest president in American history expecting the worst—most likely a test of his resolve over Berlin.

Rusk urged the Atlanticists gathered before him to consolidate their organizations into a more effective institution within several weeks.

By year’s end, the Atlantic Council was born, with Acheson, Herter, and Lord among its leaders.

Herter, Rusk’s predecessor as President Dwight Eisenhower’s secretary of state and the Atlantic Council’s first chairman, harbored a vision that went far beyond the transatlantic community of those times—one that influences the Atlantic Council to this day.

As the historian Nancy Walbridge Collins has written, Herter “argued that an Atlantic institution should devote itself to problem-solving on a wide range of political, economic, and social issues relevant to the entire international community, approaching them from a core of consistent Atlantic values. He wanted to put into global practice the values in which they all believed.”

Fast-forward to today, and the United States and its allies are confronting a similar inflection point in history, with perhaps even more complex challenges and larger stakes. As Brent Scowcroft, the two-time chairman of the Atlantic Council, said before his passing in August of 2020, all the accomplishments of the past seven decades since World War II could be at risk, depending on how our present era unfolds.

Like the Kennedy administration of sixty years ago, the Biden administration is off to a difficult start following the disruptive four years of the Trump presidency. As we write, it is grappling with a new COVID-19 surge, it has ceded Afghanistan to the Taliban following the withdrawal of US troops, and it is confronting a peer competitor in China that is escalating its threats to Taiwan even as it grows more repressive at home and more ambitious abroad. China is a far more capable peer competitor economically and technologically than the Soviet Union was during Kennedy’s time.

Back then, the test was whether the United States and its partners, having learned the tragic lessons of World War II, could head off new conflict and advance freedom and democracy by constructing a new, rules-based system of practices and institutions.

As imperfect and incomplete as that world order was, it exceeded all postwar expectations. Following the West’s peaceful Cold War victory over the Soviet Union and its ideological bloc, it seemed for a short time that democratic societies and open markets would be the future’s dominant elements.

Now the challenge is nothing less than stopping the erosion of the remarkable gains made since World War II and building upon them in a world where US global leadership is waning and China’s influence is expanding. All of that injects even greater meaning and urgency into our mission of “shaping the global future together” with partners and allies.

The Atlantic Council has emerged from the COVID-19 crisis of the past two years even better equipped to tackle this historic test.

We have come out of the worst pandemic in a century financially stronger, operationally improved, and substantively more robust, reaching the largest global audiences in our history through new digital and editorial capabilities.

What enabled this success was management’s three-pronged approach during this difficult period: first, ensuring the safety of the Atlantic Council’s staff and community; second, investing even further in its substantive capabilities through, among other things, the addition of a GeoTech Center, GeoEconomics Center, and Europe Center; and third, introducing new digital and editorial capabilities.

Most recently, we have launched a Global China Hub, an entirely different sort of Atlantic Council center constructed to leverage the China-monitoring capabilities across our fifteen programs and centers. The new unit will enable us to more accurately track developments related to the country and thus more effectively develop strategies and partnerships to respond to them.

We don’t measure our success only by the size and caliber of our staff or the health of our balance sheets. It can be measured most of all by the relevance of our work across the six defining challenges that we believe characterize the inflection point we are living through:

Even as we pursue this ambitious agenda, we never lose sight of the values that drive our nimble, purposeful, nonpartisan organization.

For the seventh year in a row, the Atlantic Council received the top, four-star rating from Charity Navigator. The Council continued to be recognized by our peers and was ranked as the seventh-best think tank in the United States in the University of Pennsylvania’s Think Tank Index and fourth-best “think tank to watch”—underscoring broad recognition of our momentum.

We have been consistently moving up in the rankings across the index’s wide range of categories, which place us among the world’s top think tanks on everything from defense and national security, to energy and resource policy, to our impact on public policy, to the quality of our management, to our quality-assurance and integrity policies.

The Council also has been attracting the biggest audiences in our history, drawing over nine million views to our website and two million attendees and views to our public events in 2020. We did this while continuing to convene small, high-powered, off-record, bespoke groups around our specific programmatic goals.

We have succeeded due not only to our focused and clear strategy, but also to our unique culture. We are a family of intellectual entrepreneurs who are collegial in our interactions, optimistic in our conviction that we can make a difference, solutions-oriented in our approach, and determined to apply cutting-edge expertise to every aspect of our work.

Overall, the world is in a far better place than it was when the Atlantic Council was born in the aftermath of World War II and the early years of the Cold War—more democratic, more prosperous, more connected, and more collaborative. Nevertheless, the world’s trajectory on all these fronts in recent years is concerning, making the present period as momentous and pivotal as those after World Wars I and II.

At the Atlantic Council, it is our conviction that it will take all the power of constructive US common cause alongside allies and partners to reverse these negative trends and shape a better future.

Please work together with us to achieve this historic imperative.