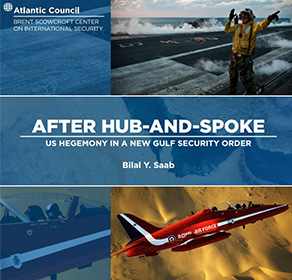 The era of Pax Americana in the Gulf, and perhaps in the broader Middle East, is changing. Regional transformation and chaos resulting from the Arab uprisings, the rise of ISIS and its global terrorist reach, shifting US priorities around the world, and the rise of other outside powers in the Gulf have contributed to an acceleration of the transition from a Gulf security architecture with almost exclusive US access and control to a more penetrated system in which the United States is still militarily dominant. However, major powers like Russia, China, the United Kingdom, and France are more confidently stepping in, pursuing their self-interests, and assuming more expansive political, economic, and security roles that either compete with or complement US policies and interests.

In After Hub-and-Spoke, Bilal Y. Saab, Senior Fellow for Middle East Security and Chairman of the Gulf Policy Working Group and ISIS War Game Series at the Atlantic Council’s Brent Scowcroft Center on International Security, explains how this new strategic context in the Gulf presents an opportunity, but also a wake-up call, for the United States to review its decreasingly effective Gulf security approach. He argues that despite Washington’s forward deployment and stationing of relatively large numbers of state-of-the-art air, land, and naval assets since the early 1990s that could deter and defeat major traditional threats to the region, Gulf security, facing an array of complex and non-traditional threats, is still at risk. This discrepancy, he says, and the fact that Washington has had to provide security reassurances regularly to its Gulf partners, arguably with reduced success and a great deal of difficulty and frustration, suggests a reassessment of overall US strategy for Gulf security.

Saab suggests that the US promotion and operationalization of real burden-sharing by capable and longstanding allies such as the United Kingdom and France, paired with a strategic dialogue with major adversaries such as Russia and China, offers a more sustainable US Gulf security strategy than the one Washington has pursued unilaterally over the past few decades.

Securing the Middle East after an Iran nuclear deal is the next big challenge for both the region and the international community. The United States and its allies have engaged in tireless diplomacy with Iran over the past few years to produce an agreement that would limit Tehran’s nuclear program for the next decade and […]

Artful balance: The future of US defense strategy and force posture in the Gulf

After Hub-and-Spoke: US Hegemony in a New Gulf Security Order

On Friday, April 29 from 9:30 a.m. to 11:00 a.m. the Atlantic Council hosted a discussion of a new report by Brent Scowcroft Center Senior Fellow Bilal Saab, entitled After Hub-and-Spoke: US Hegemony in a New Gulf Security Order, and a debate on US global defense posture in the next decade and how it might affect future […]