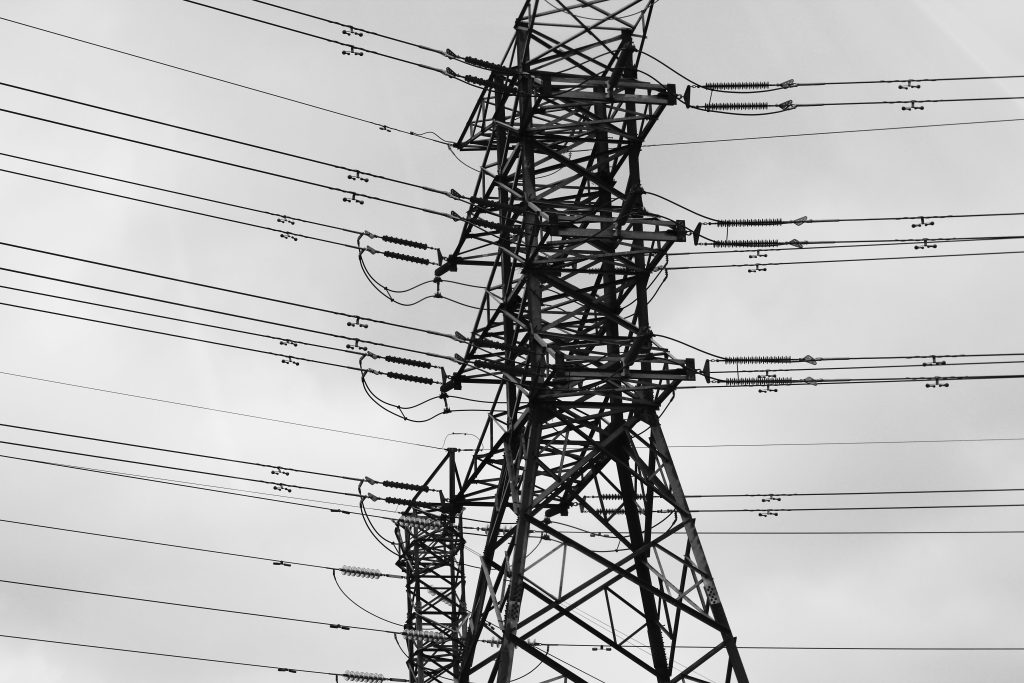 Can natural gas and nuclear power be green? “Sometimes, and for a limited period of time,” said the European Parliament on July 6, as part of an ongoing negotiation over the EU taxonomy, a key component of the European Green Deal (EGD). The EGD is the European Union’s ambitious plan to create the first emissions-neutral continent that is simultaneously competitive economically and ready to face the climate change challenge. Europe has committed to reducing its net greenhouse gas emissions by at least 55 percent by 2030, compared to 1990 levels. By 2050, Europe hopes to become a net-zero emitter.

Yet, the positive effects of the EGD need not stay limited to Europe. Africa possesses an abundance of opportunities to tap into renewable energy, a dynamic demography, and vibrant economic prospects. What it needs are significant private-sector investments. The EGD’s innovative work on a green bond standard and a taxonomy for sustainable activities is shaking the Western financial world. If seized correctly, it represents an opportunity to foster green finance on the continent.

A new green bonds standard to build on

Since the first issuance by the European Investment Bank (EIB) and the World Bank in 2007, the green bond market has enjoyed a remarkable growth rate. In December 2021, cumulative green bonds issuance reached a total of $1.5 trillion, with more than $500 billion issued in 2021.

By leveraging private-sector investment, green bonds have a significant potential to finance climate change adaptation and mitigation projects in Africa. International private investors have an increasing appetite for this finance mechanism, as shown by the successful initiatives taken by the African Development Bank over the past decade since its launch of such bonds in 2013. The West African Development Bank (BOAD) issued its first sustainability bond in January 2021. Yet, much more can be done. Africa represented only 0.26 percent of global green bonds issued last year.

Until now, the Climate Bonds Standard (CBS) developed by the Climate Bonds Initiative has been the reference against which green bonds at the global level are certified. However, a proposed new European Green Bond Standard will go beyond the CBS by refining and expanding the scope of eligible green projects while proving their legitimacy. The EU standard will improve the quality of the external review and increase transparency, making it easier for investors to compare and assess green bonds.

This ambitious framework, currently under negotiation, will be open to European and non-European issuers. The EU’s work on climate finance is innovative and ahead of the rest of the world. If the “Brussels Effect” holds, as it has in other policy areas, such as digital privacy regulation, this framework could become the new gold standard for the green bonds market.

African markets see in green bonds a huge potential to drive green investment to finance climate projects on the continent. Relying on the EU standard, which will be familiar to investors and deemed trustworthy, is an opportunity to channel investment into African Green Bonds.

This will require African countries to acquire a good grasp of the EU standard. The Africa Green Finance Coalition (AGFC) could help. Launched during last year’s United Nations Climate Change Conference of the Parties (COP26) and inclusive of all African countries, its mission is to ease learning and technical assistance to support financial-sector reforms. AGFC should seize the opportunity to help African countries benefit from this standard.

The EU taxonomy is a standardized classification system based on clear qualitative and quantitative criteria. It identifies economic activities that are eligible to be defined as “green” by contributing substantially to the transition to net-zero emissions. The objective is to build a reference framework of green activities to drive the private sector’s investment in the green transition.

Until now, only a few countries in the world have developed taxonomies. In Africa, South Africa is alone in having launched one, with its April announcement coming after almost two years of work. By pledging to reach net-zero by 2050, South Africa is setting an example and is demonstrating the continent’s ambition. Other African nations must follow suit.

The EGD will be an important steppingstone in setting up a shared global regulatory framework for green finance. Both innovative and sophisticated, the European taxonomy is influencing jurisdictions that plan to develop their own classification systems for green projects. The EU framework is opening a new path that African countries can adapt to their own markets, creating a taxonomy that investors would already be familiar with, thereby lowering market-entry costs and facilitating green investments.

Crucially, this process must treat African nations as partners, not just recipients of rules handed down to them. Different African countries have a range of abilities when it comes to implementing complex regulations. It’s important that additional regulations do not hinder growth by adding complexity. Leveraging both the EU Green Bonds Standard and taxonomy to foster investment in Africa does not mean importing them directly. They must be adapted and tailored to the African markets with the possible help of the AGFC. This also requires a partnership approach.

Beyond a renewed EU-Africa partnership

European leaders must also address the grievances raised by African nations concerning the impact and potential blind spots of Europe’s climate policy. The EU is Africa’s largest trade partner, and the European Commission’s plan to end fossil-fuel consumption will have serious implications for oil- and gas-dependent exporters, although these will be mitigated by a transitory period when specific gas activities that, for example, replace coal energy generation will be considered as green. New agricultural regulations and carbon taxes proposed in the EGD may have severe impacts on African producers and will likely create new barriers between African and European markets.

Instituting a green agenda without accounting for Africa’s unique climate needs and capabilities can further exacerbate the social and economic disparity between European and African nations. If the EGD’s climate finance opportunities are to work in, and for, Africa, EU ministers must develop a more equitable and accountable approach to partnering with the continent.

This approach is at the heart of the renewed relationship between the African Union and the EU. At their February summit, they agreed on a partnership including an Africa-Europe Investment Package of 150 billion euros to foster private and public investment. A large part of this investment is dedicated to supporting African countries in implementing their climate transition strategies under the 2015 Paris Agreement.

This renewed partnership emphasized that the strategic alliance has to be based on a “clear understanding of our respective and mutual interests and responsibilities,” including in “developing a green growth model.” Africa and Europe could build on the example of the International Platform on Sustainable Finance (IPSF) launched by the EU in October 2019. The IPSF aims to foster private green investments by making international green finance systems more comparable. Kenya, Morocco, and Senegal have joined the platform. Such initiatives will enable the development of a more inclusive dialogue toward common standards on green bonds and classification systems for climate-friendly projects.

African nations must not miss the opportunity to better integrate their perspectives in the formulation of international regulations—which would allow them to drive a larger share of global green finance just as the sector is taking off.

Emilie Bel is a nonresident fellow with the Atlantic Council’s Africa Center, the head of international affairs at the French Insurance Federation, and a consultant for the World Bank. 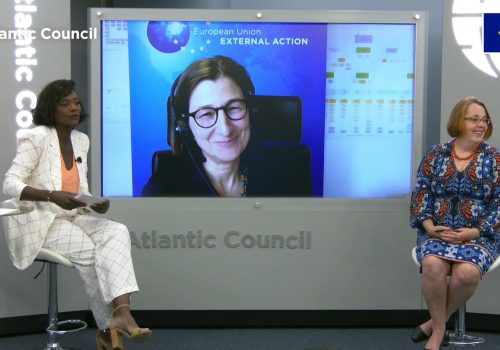 As the world grapples with pressures caused by the COVID-19 pandemic, climate change, and the war in Ukraine, there is an urgent need for Africa, Europe, and the United States to work more closely than ever before on their common challenges in order to build a more secure and equitable future for all. 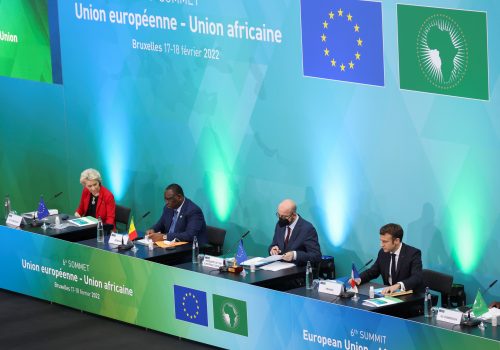 The war in Ukraine has sent shock waves throughout the international system. For both Europe and Africa, it means a strengthened relationship is more imperative than ever. 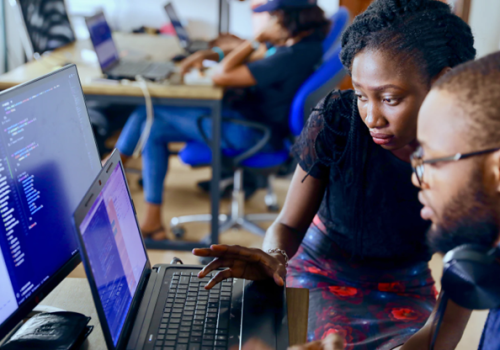