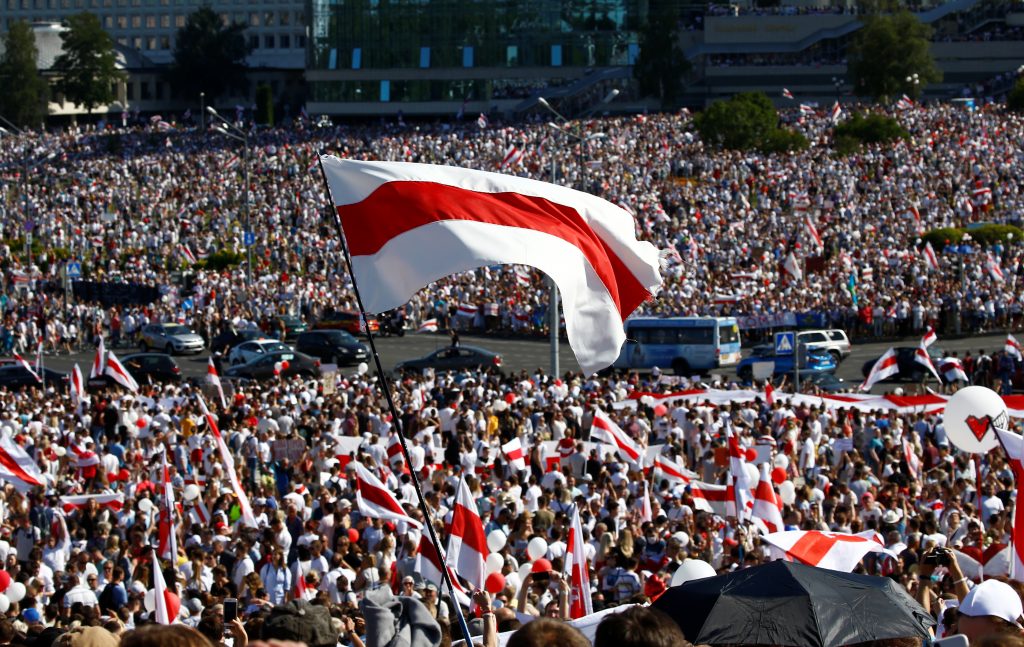 Belarusian President Alyaksandr Lukashenka seems to be on his way out. One week after his allegedly successful re-election, he could only gather a few thousand press-ganged “supporters” for a regime rally in Minsk on Sunday, while colossal crowds gathered in the Belarusian capital hours later to demand his departure.

Lukashenka’s blatant theft of the country’s August 9 presidential election has united the Belarusian people against him. Presumably, the only support he can now count on is the loyalist core within the country’s security apparatus. It is time for him to leave the country while he still can.

The obvious question is whether Russia will intervene militarily as it did in Ukraine after a similar popular uprising ousted the country’s Kremlin-friendly president in February 2014. Some authoritative voices in Moscow have called for such an intervention, notably Margarita Simonyan, the chief editor of prominent Kremlin media outlet RT.

However, most Moscow media commentaries have been critical of Lukashenka. They are also strikingly and uncharacteristically uncoordinated, suggesting no clear Kremlin policy on Lukashenka. While it is impossible to rule out a Russian military intervention, there are numerous good reasons to presume that it will not take place.

On a personal level, Putin cannot stand Lukashenka, and Putin is a very emotional man. Throughout the past few years, Putin has reduced the previously large Russian subsidies to Belarus and clearly no longer wants to subsidize an obsolete Soviet-type economy. Meanwhile, Lukashenka never tires of playing tricks on Putin. During the last New Year holidays, he visited the Russian leader and left three big bags of Belarusian potatoes in his elegant halls.

Domestically, Lukashenka does not appear to have any remaining popular support. This stands in sharp contrast with the situation in Ukraine in 2014. At the time of Russia’s military intervention, there was still significant Ukrainian support for the pro-Russian policies pursued by the ousted president Viktor Yanukovych.

Given that the Belarusian Deputy Interior Minister has apologized for violence against protesters and many individual members of the security services have demonstratively thrown away their uniforms, it is doubtful whether Lukashenka controls a significant number of security forces any longer. Even if his regime is popped up by Russian bayonets, the Kremlin cannot believe that Lukashenka is able to guarantee stability in Belarus.

Belarus is an orderly and disciplined society with a highly educated population that is currently in the grip of what appears to be a national awakening. Any Russian military intervention in today’s Belarus would probably encounter stiff opposition and would certainly cost Russia too much in both blood and treasure. In hindsight, the Kremlin would probably be happy if it had not invaded eastern Ukraine. Why repeat the same mistake in far less advantageous circumstances?

Nor is there any anti-Russian sentiment to help justify an invasion. The Belarusian opposition has three demands: Lukashenka has to go, all political prisoners must be released, and new free and fair elections must be held. So far, no slogans against Putin or Russia have emerged. The Kremlin should be able to live with that.

Rather than looking to Russia’s policy toward Ukraine in 2014, I think we should turn to its policy on Armenia since 2018. This was the most recent post-Soviet color revolution. Initially, Putin’s position seemed to be hesitant, but now he appears to be quite happy with Armenia’s very popular democratic Prime Minister Nikol Pashinyan. Armenia has stayed in the Eurasian Economic Union and in Moscow’s Collective Security Treaty Organization along with Belarus, Kazakhstan, Kyrgyzstan, and Tajikistan. In addition, large Russian state companies completely dominate the Armenian economy.

Putin has had two phone calls with Lukashenka since the August 9 election. On August 10, Putin called and congratulated Lukashenka, but without much apparent enthusiasm. On the contrary, he presented a thinly-veiled list of demands to Lukashenka: “I hope that your governance will facilitate further development of mutually beneficial Russian-Belarusian relations in all areas, closer cooperation within the Union State, extensive integration within the Eurasian Economic Union and the CIS, and military and political links within the Collective Security Treaty Organisation. Without doubt, these efforts serve the core interests of the brotherly nations of Russia and Belarus.”

With the situation looking increasingly bleak, Lukashenka called Putin on August 15, but he did so only after having made a television appeal to Putin to take his call. Putin’s published statement does not contain a word of support for Lukashenka. Nor does he mention the elections or recognize Lukashenka as president, while he favors good bilateral relations. Instead, they “agreed on further regular contacts at various levels, and reaffirmed their commitment to strengthening allied relations, which fully meets the core interests of the fraternal nations of Russia and Belarus.” In light of those words, Lukashenka’s later statement about Putin’s support for him appears dubious at best.

So far, nothing that has happened in Belarus poses a direct threat to the Kremlin, apart from its dislike of popular movements and democracy in general. No significant Belarusians have called for the country’s exit from the Eurasian Economic Union or Moscow’s Collective Security Treaty Organization, which is what Putin has emphasized.

The Kremlin can probably work with any new Belarusian leaders as it successfully works with Pashinyan in Armenia. Putin’s regime has a comparative advantage in its skill to infiltrate and manipulate, which costs much less than military intervention. Why be too blatant?