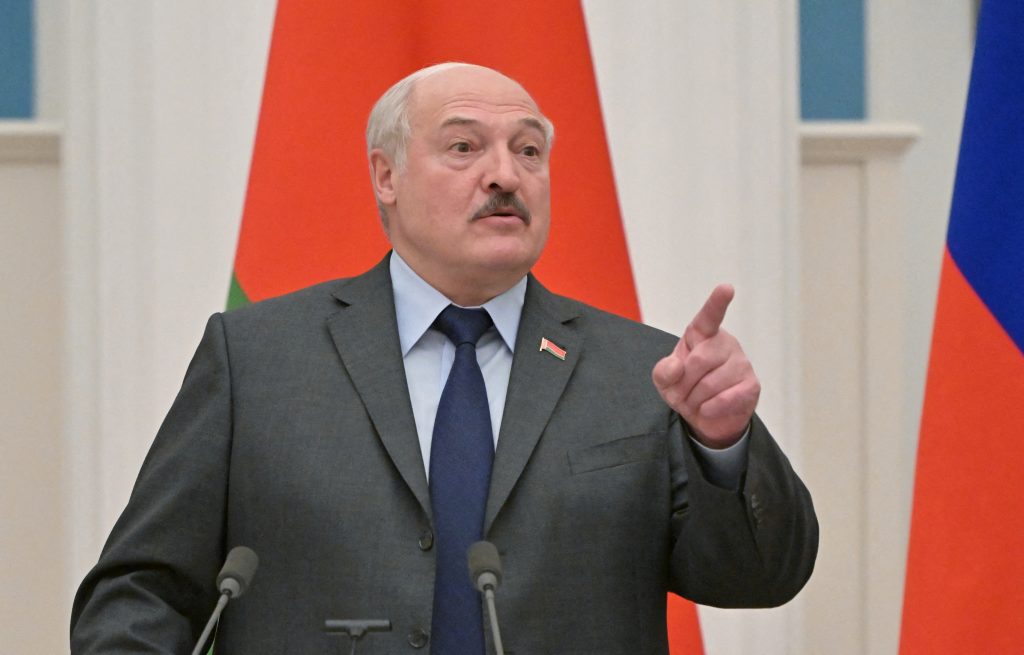 Belarus dictator Alyaksandr Lukashenka is targeting domestic anti-war saboteurs with the death penalty amid a crackdown on opposition to his supporting role in Vladimir Putin’s Ukraine invasion.

The Minsk strongman signed amendments to the Belarusian criminal code on May 18 introducing “attempted terrorism” to the list of capital offenses punishable by the death penalty. The process was initiated less than one month early and reflects regime frustration at efforts to disrupt the war effort in Belarus.

While the Belarusian military has yet to directly join the fighting in Ukraine, Lukashenka allowed Putin to use his country as a key platform for the February 24 invasion. This proved crucial in the early stages of the war, enabling Russia to launch a major offensive against Kyiv from Belarusian territory. Lukashenka has also given his permission for Russia to launch hundreds of airstrikes from Belarus against Ukrainian targets.

The decision to become an accomplice in Russian aggression against Ukraine is unpopular with many in Belarus. Polls indicate that a majority of Belarusians oppose Putin’s invasion and do not want their country to play any part in the war.

Some Belarusians responded to Lukashenka’s support for the war by sabotaging the country’s rail network in a bid to prevent Russian troops and military equipment from reaching Ukraine. These efforts succeeded in disrupting the invasion and proved deeply embarrassing for Lukashenka, who is dependent on Russia for his political survival and can ill afford to let his Kremlin patron down.

The new amendments to the Belarusian criminal code do not specifically refer to recent incidents of railway sabotage but activists believe the changes are a direct response to the anti-war partisan campaign.

The implications of the recent amendments are expected to become clearer in the coming weeks as a number of Belarusian suspects accused of railway sabotage go on trial. Those currently facing prosecution do not fit the standard profile for political activists. Most are residents of provincial towns and come from traditional working class backgrounds. Some are railway employees.

Lukashenka’s death penalty threats may not be limited to Belarusian anti-war activists. Human rights campaigners fear the recent amendments could also be used more broadly against the country’s pro-democracy opposition. The emphasis on terrorist offenses is very much in line with previous efforts to target political opponents.

During the crackdown on nationwide anti-regime protests that came in the wake of Belarus’s flawed August 2020 presidential election, numerous activists, journalists and politicians were accused of terrorism. For example, prominent Belarusian blogger Anton Matolka was placed on a register for people involved in terrorist activity.

Meanwhile, exiled Belarusian opposition leader Sviatlana Tsikhanouskaya stands accused of planning acts of terrorism. Tsikhanouskaya and other members of the political opposition could potentially face the death penalty if they return to Belarus. It remains unclear how many other terrorism-related cases involving opposition figures are currently under investigation.

Tsikhanouskaya responded to news of the death penalty amendments by accusing Lukashenka of Orwellian attempts to suppress opposition in Belarus. “It is no coincidence that the death penalty for “attempted” terrorism was introduced on the same day when Orwell’s book “1984” was banned in Belarus. The co-aggressor wants to fool us that war is peace and dissent is terrorism. But I see dread not strength,” she tweeted.

Belarus is the only country in Europe to currently impose the death penalty. Human rights defenders claim more than 300 executions have taken place in Belarus since 1994.

High-profile cases in recent years have included the execution Dzmitry Kanavalau and Uladzislau Kavaliou, who were accused of carrying out a 2011 terror attack in the Minsk metro. The case sparked widespread public unease due to a lack of conclusive evidence and concerns over trial procedures. Despite regime claims that most Belarusians support the death penalty, a poll conducted by Chatham House in 2020 found that only 21.3% actually backed the policy.

Harsh prison sentences for political activism have long been a routine aspect of the repressive regime in Lukashenka’s Belarus. Nevertheless, the recent changes to legislation governing capital punishment indicate a significant escalation in the political crisis that has gripped the country since summer 2020.

It is now clear that Lukashenka’s decision to back Putin’s Ukraine War has sparked a new wave of domestic resistance to the regime. The Belarus dictator has responded in typical fashion with threats of draconian new punishments. This is likely to fuel further anger among ordinary Belarusians, especially given widespread public opposition to the invasion of Ukraine.

With Belarusians uneasy over their country’s role in Putin’s Ukraine War, Moscow may revive earlier plans for the military takeover of Belarus if growing anti-war sentiment threatens to undermine Russian influence.