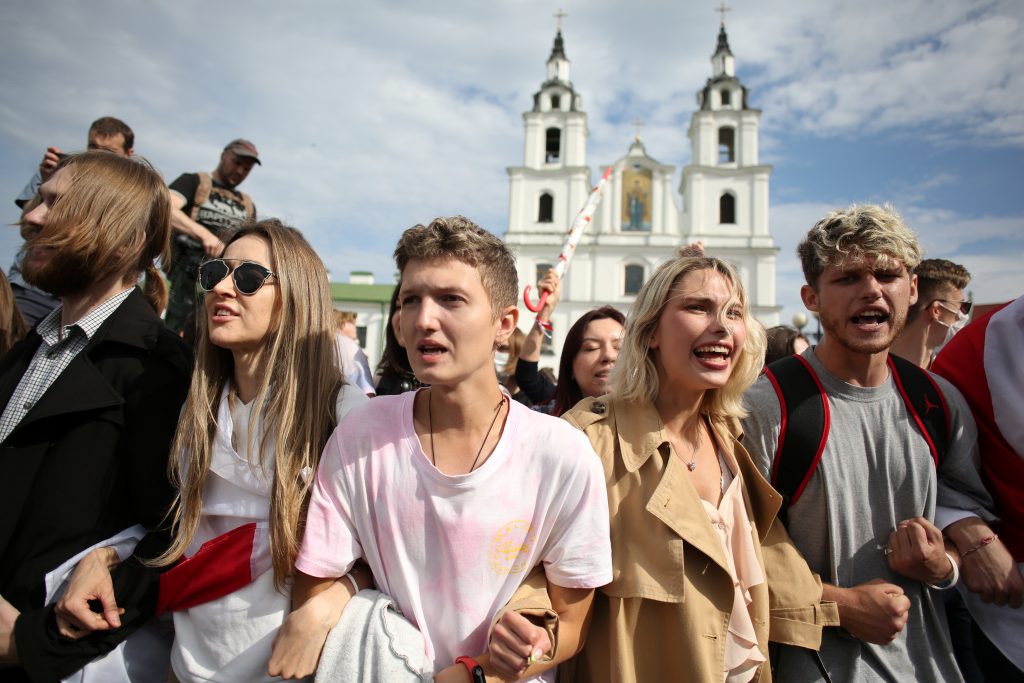 As the crisis in Belarus continues to unfold, a bipartisan group of US Congress members led by Representatives Marcy Kaptur (D-OH), Gregory Meeks (D-NY), Adam Kinzinger (R-IL), and Brian Fitzpatrick (R-PA) have addressed a letter to Secretary Pompeo urging the Trump Administration to take a stronger stand against the violence being carried out by the Belarusian government against its own people. The letter is an indication of bipartisan US Congress support for a Belarusian pro-democracy protest movement that finds itself confronted by increasing domestic oppression and escalating Kremlin intervention. Last week, Vladimir Putin announced that Russian forces are ready to enter Belarus and prop up the current regime if necessary. Additional lawmakers who signed the letter include Representatives Keating, Wilson, Connolly, Shimkus, Schiff, Lipinski, Cooper, McGovern, Gallego, Ruppersberger, Cohen, Lowenthal, Carson, Phillips, Costa, Pallone, and Rush. Below is the text in full:

As long-time supporters of liberty in Central and Eastern Europe, we write in strong solidarity with the people of Belarus in their struggle for freedom following that nation’s fraudulent August 9 presidential election. We respectfully urge you to increase efforts to support the Belarusian people by condemning the violence, urging the release of all political prisoners, facilitating diplomatic support for new free and fair elections, enhancing support for Belarusian civil society, ensuring access to balanced and independent media, and applying sanctions on all human rights offenders in coordination with our European allies.

As you know, the international community has largely declared Belarus’s August 9 presidential election as neither free nor fair. According to the Organization for Security and Co-operation in Europe’s (OSCE) Office for Democratic Institutions and Human Rights, there was “significant administration misconduct,” as well as “clear intimidation of political activists in the pre-election period.” OSCE and other credible international observers were prevented from observing the election, and multiple candidates were arbitrarily barred from running.

In response, the Belarusian people took to the streets demanding dignity, liberty, and an election that reflects the will of the people, not dictators. Tragically, these peaceful protests have been met with violent crackdowns from security services, arbitrary arrests, information lockdowns, and persecution of civil society, as well as large-scale torture and ill-treatment of the Belarusian people. Four deaths of protesters have been officially confirmed, and more than 700 complaints on torture and police violence have been filed. Sadly but not surprisingly, this oppression is but a continuation of the repressive and Soviet-style tyranny of Belarusian dictator Alexander Lukashenko.

We stand in strong solidarity with the thousands of brave men and women of Belarus who are demanding to have their voices heard in towns, factories, and cities across the nation. In the face of state-sponsored intimidation and violence, the voices of citizens speaking out serve as an inspiration to liberty lovers in the region and around the world, who believe that the authorities should protect basic human rights and freedoms, not abuse them.

Further, we strongly condemn the Belarusian authorities’ use of violence and oppression against the people of Belarus, and call for the immediate release of all political prisoners. This use of violence only further demonstrates the lack of legitimacy of that regime.

Instead of heeding the calls for liberty from his people, Lukashenko has turned to his ally and enabler, Russian President Vladimir Putin, to stay in power. Russia has been quick to act with a growing mix of diplomatic support, increased propaganda targeting the Belarusian opposition, media resources, cyber, intelligence, security advisers, and other support.

This movement for change is not about geopolitics, but rather a demand for basic rights and dignity. We believe the Belarusian people should determine their future themselves democratically, without overt or covert interference. Nonetheless, we must do all we can to support them in the name of justice and freedom. The transatlantic community must hold to account abuses within European communities, and in accordance with the Belarusian authorities’ obligations to the Helsinki Final Act. In that vein, we welcome the EU Council’s conclusions and consideration of sanctions on August 14, 2020, in support of a democratic, independent, sovereign, prosperous, and stable Belarus.

For these reasons, we urge you and the Administration to provide greater leadership and to continue diplomatic efforts, including increased coordination with the EU and like-minded partners, for an immediate cessation of violence and crackdowns, the release of all political prisoners, and dialogue to forge a path for free and fair elections with the participation of international observers.

We must provide support to that nation’s beleaguered civil society, which must navigate the complex political negotiations required for potential power transitions, while also mitigating the health risks of COVID-19. We must extend humanitarian aid to all those who have suffered from recent state repressions. Further, we strongly support the critical work of Radio Free Europe/Radio Liberty in providing access to information and independent media, and urge you to condemn any restrictions on their work.

US sanctions must be on the table. Should the situation not improve, we strongly urge you and the Administration to enforce and expand carefully targeted sanctions on Lukashenko and actors, both foreign and domestic, who are complicit in committing human rights abuses, backing violence, arbitrary arrests, and orchestration of electoral fraud.

We continue to stand in strong support of the vision of a Europe free and at peace that has brought unprecedented stability and prosperity to the European continent where citizens have the right to choose their own future. Surely, the people of Belarus deserve the same.

Image: Belarusian students link arms at a September 1 rally in Minsk as pro-democracy protests continue across the country. (Tut.By via REUTERS)