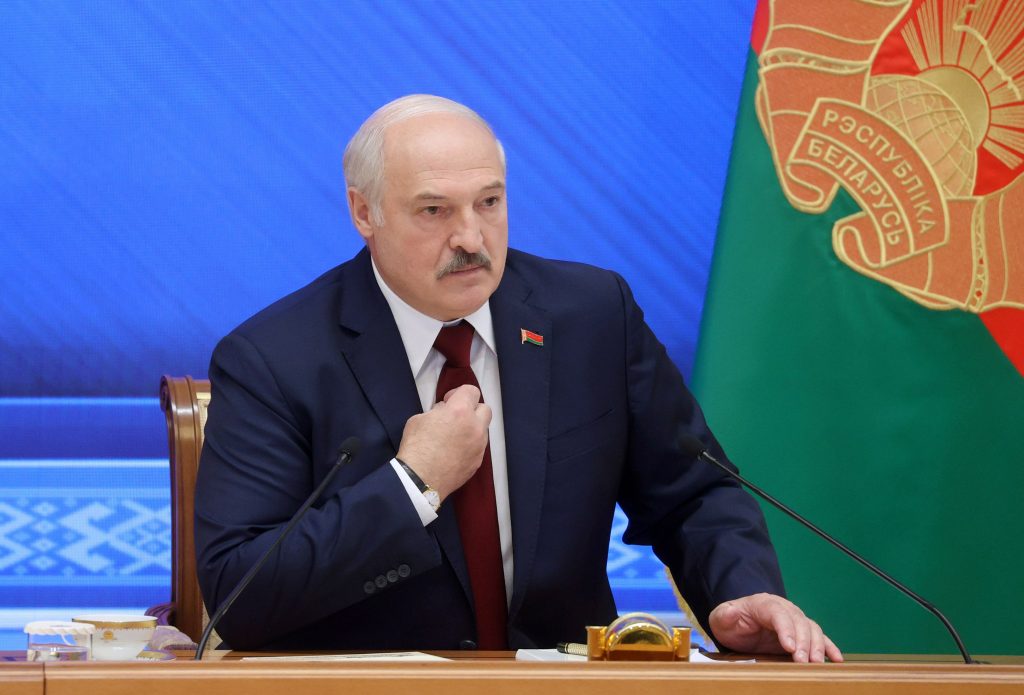 In a rambling and often unhinged eight-hour press conference this week, Belarus dictator Alyaksandr Lukashenka appeared to make some news by declaring that he would soon resign as the country’s president.

Lukashenka said he was not “clinging to this office with all my might. No, other people will come after me and it will be very soon.” He then added, “Don’t indulge in guessing when Lukashenka is going to step down. Very soon.”

One interpretation is that this was just the latest example of the nonsensical and erratic statements Lukashenka regularly makes, and should be taken with the usual grain of salt. In the same press conference, Lukashenka also said his brutal crackdown on dissent had helped avert World War III, and in an utterly bizarre claim, said that his security services arrested the dissident journalist Raman Pratasevich after effectively hijacking Ryanair Flight 4978 on orders from the West.

Few in attendance sensed that Lukashenka was genuinely preparing to depart the political arena. In a commentary for MK, Russian journalist Mikhail Rostovsky wrote that the atmosphere of the event and Lukashenka’s general demeanor was not consistent with that of “a politician who is about to give up power.”

Noting the photo exhibition celebrating the Belarusian strongman’s career and the adoring and applauding pro-regime journalists assembled, Rostovsky wrote that “the whole pathos of the event was just the opposite. Lukashenka purposefully tried to draw a line under the [recent] period of powerful political instability in Belarus, to start a new period in the modern history of the republic, in which there is no longer any place for attempts to overthrow him.”

Likewise, the Belarusian political commentator Dmitry Bolkunets noted in an interview with Lenta.ru, “for many years Lukashenka has been saying he is ready to leave, he is tired of power, he is tired of the presidency. But he remains. He won’t leave, at least not voluntarily.”

Nevertheless, Lukashenka has indeed been talking about the prospect of a post-Lukashenka Belarus with increasing frequency.

Back in November 2020, he said he would step down after a new Belarusian Constitution was adopted that weakened the presidency and gave more power to parliament. “I will not work as president with you under the new constitution,” Lukashenka said at the time, but did not give any timetable.

Months later, in May 2021, Lukashenka revealed that he would sign a decree transferring power to Belarus’s Security Council in the event that he is unable to fulfil his duties as president.

According to these changes, in the event of Lukashenka’s death or incapacitation, Belarusian Prime Minister Roman Golovchenko would still formally become acting president as stipulated by the country’s existing constitution, but his role would be largely ceremonial. Real power would be vested in the country’s 20-member Security Council, which would make decisions by secret majority vote.

This would effectively turn the post-Lukashenka Security Council into the functional equivalent of the Soviet-era Politburo. And given that Lukashenka’s son Viktor wields considerable power in the council, the move appeared designed to facilitate a dynastic succession.

The subtext of Lukashenka’s increasingly frequent references to his own departure is the fact that Russia has been persistently pressuring him to enact constitutional changes that would reduce the role of the presidency and empower the Belarusian parliament.

The Kremlin is simultaneously putting the pieces in place to assure that Moscow would be in a position to control such a newly empowered post-Lukashenka Belarusian legislature through pro-Kremlin parties and media. Russia is also rapidly expanding its economic, political, and military footprint in Belarus. It all appears to be an effort by Moscow to control Belarus, with or without Lukashenka.

“Putin need not repeat his 2014 Crimean operation to gain full control of Belarus. Minsk agreeing to host Russian military bases as well as adopting the ruble as its national currency would suffice,” Konstantin Eggert wrote in a recent column for Deutsche Welle.

“That would make Putin master of the Belarusian economy, enabling the subsequent takeover of its most valuable assets by Kremlin-selected Russian companies, as well as providing a bridgehead allowing Russia to simultaneously face off against Ukraine to the south and NATO member Poland to the west.”

In the past, whenever Russia pressured Lukashenka, he would respond by making overtures to the West. But in the aftermath of Belarus’s flawed August 2020 election, the ensuing brutal crackdown on dissent, and the effective hijacking of Ryanair Flight 4978, Lukashenka has become an international pariah and the old geopolitical balancing act is no longer an option.

In an interview with RFE/RL’s Belarus Service on August 7, US Ambassador Julie Fisher commented, “diplomatic conversations with the regime in Minsk have infrequently led to engagement and response.” Instead, she said, “the language of pressure” and “hard tools like sanctions” have been “most effective in conveying the views of the West.”

Two days later, on the one-year anniversary of the disputed Belarusian election, the United States, Canada, and the United Kingdom announced tough new trade and financial sanctions against Minsk, including measures targeting Belaruskali, the potash giant that is a major source of hard currency for the regime.

At his marathon press conference this week, Lukashenka bent over backwards to demonstrate his fealty to Moscow and his hostility to the West. “You won’t be able to tear us away from Russia and win us over to your side,” he said in remarks directed at Western journalists. “We are in no way different from Russians. You should take it for granted.”

With no place else to turn, Lukashenka appears to be negotiating with Moscow about his political future. He appears to be sending a message to the Kremlin that forcing him out could be risky while keeping him in place, or allowing for a dynastic succession to his son, could have geopolitical benefits.

One year after anti-regime protests in Belarus first began, the crisis appears to be entering its most dangerous phase. The West needs to keep up the sanctions pressure and make Russia’s soft annexation of Belarus as costly as possible.

Belarus dictator Alyaksandr Lukashenka’s terror tactics were thrust into the international spotlight at the Tokyo Olympics when one of his country’s athletes refused orders to fly home early and instead fled to Poland.