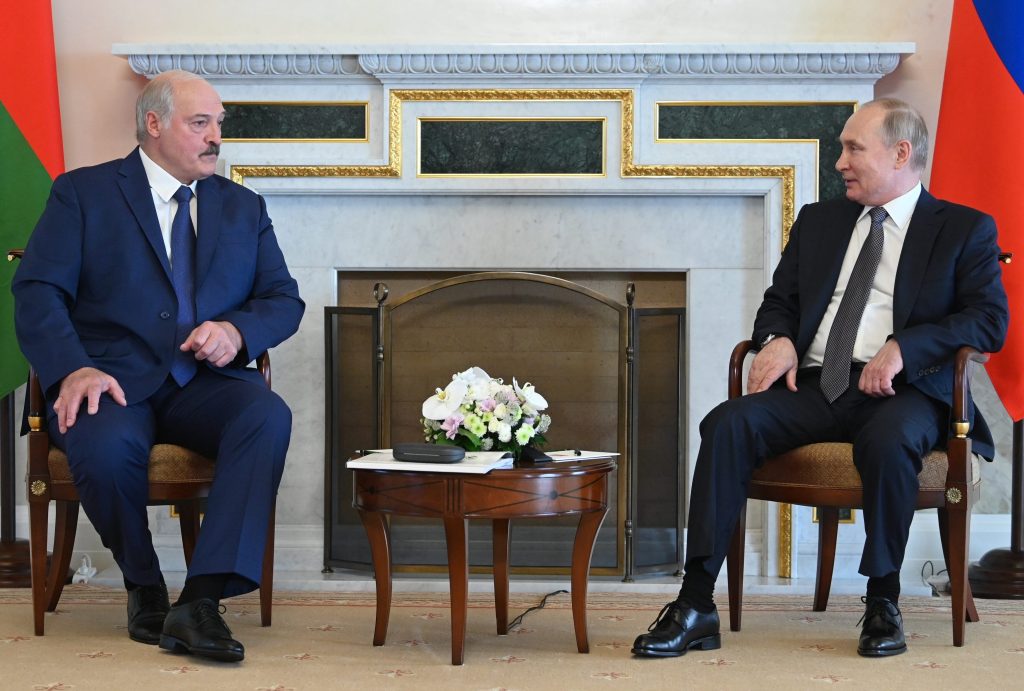 It was Lukashenka’s fourth trip to meet Putin in Russia so far this year, and the script was as well worn as it was predictable and empty. Putin lauded the partnership between the two countries, calling Belarus Russia’s “large and reliable partner in the economic sphere” and stressing that trade between Moscow and Minsk was flourishing despite Western sanctions.

For his part, Lukashenka accused the West of waging a campaign of “terror” against Belarus, thanked Putin for being a “reliable economic partner,” and said Minsk would meet its economic obligations to Russia “at any cost.”

Lukashenka’s frequent pilgrimages to Russia, the performative partnership rituals, the snowmobile ride, skiing expedition, and the trip on a yacht all illustrate the corner that the Belarusian autocrat has backed himself and his country into. The Belarusian regime’s brutal crackdown on dissent, its hijacking of Ryanair Flight 4978 and abduction of Raman Pratasevich, its weaponization of illegal migration, its withdrawal from the European Union’s Eastern Partnership, and its broader Cold War with Europe have effectively burned all of Minsk’s bridges with the West. All that is left is Russia.

The barbed wire fence Lithuania is erecting on its border with Belarus may not be a new Iron Curtain, but it is symbolic of the new reality in Eastern Europe.

In an interview with Belorusskiy Partizan, the former diplomat and political analyst Pavel Matsukevich called it “a nightmare scenario for any Belarusian, to wake up in a country that has found itself in confrontation with all its neighbors except Russia, from the north, and from the west, and from the south. Belarus is now completely dependent on Moscow.”

But despite Putin’s pledges to support Belarus in the face of increasingly harsh Western sanctions, Russia’s actions tell another story.

Although Putin reportedly agreed to sell Belarus natural gas in 2022 at 2021 prices without indexation, Russian energy companies have also decided to halt supplies to Belarus’s Naftan oil refinery due to US sanctions. TASS reported on June 24 that Russian oil giants Rosneft and Surgutneftgaz had not reserved any pipeline volumes for transporting oil to the state-owned Naftan refinery, which is under US sanctions, for the third quarter of 2021. The Russian oil majors will, however, continue to supply Belarus’s second largest refinery, Mozur, which is not subject to sanctions and is partially owned by the Russian energy giant Slavneft.

The shunning of Naftan by Russia should not come as a surprise. Reuters reported back in May, citing unidentified sources, that “Russian oil exporters may suspend supplies to Belarus’s Naftan refinery” due to US sanctions. According to the report, “Russia’s Rosneft and Surgutneftegaz do not plan to supply oil to Naftan in May” because they “are concerned they could be penalised if they continue dealing with Belarusian businesses.”

Russia’s support for Belarus in the face of Western sanctions apparently only goes so far. And the same can be said of Lukashenka’s fealty to Putin.

This week, the former Belarusian presidential hopeful Viktar Babaryka was transferred to a penal colony just days after he was sentenced to 14 years in prison on corruption charges.

The former head of Russian-owned Belgazprombank, Babaryka was arrested last summer as he was trying to register as a candidate for the August 2020 Belarusian presidential election. Babaryka is viewed by many analysts as Moscow’s preferred successor to Lukashenka and Putin has reportedly been pressing the Belarusian leader to release him.

By sending Babaryka to a penal colony just days before his meeting with Putin in St. Petersburg, Lukashenka was apparently sending a message to the Kremlin leader that his loyalty only goes so far.

The Putin-Lukashenka axis of autocrats is a threat to the West’s security and an affront to its values, but it is also a deeply dysfunctional relationship that is much more complex than the stereotypes suggest.

The two dictators may be increasingly bound together geopolitically, but they are also engaged in a high-stakes game of cat and mouse.

Putin is attempting to leverage Lukashenka’s vulnerability and growing isolation in order to maximize Russia’s political, economic, and military footprint in Belarus. The Kremlin leader is also laying the groundwork to dominate its smaller Western neighbor post-Lukashenka. Meanwhile, Lukashenka is trying to secure his political survival by any means necessary.

Western policy toward the axis of autocats needs to navigate this labyrinth to secure the sovereignty of Belarus in the face of Russian revanchism, ensure the security of NATO’s eastern flank, and support the legitimate aspirations of the Belarusian people.

The autocratic regime of Belarus dictator Alyaksandr Lukashenka is intensifying its ongoing cold war against Europe via a series of threats to block trade routes along with ongoing moves to flood the EU with illegal migrants.