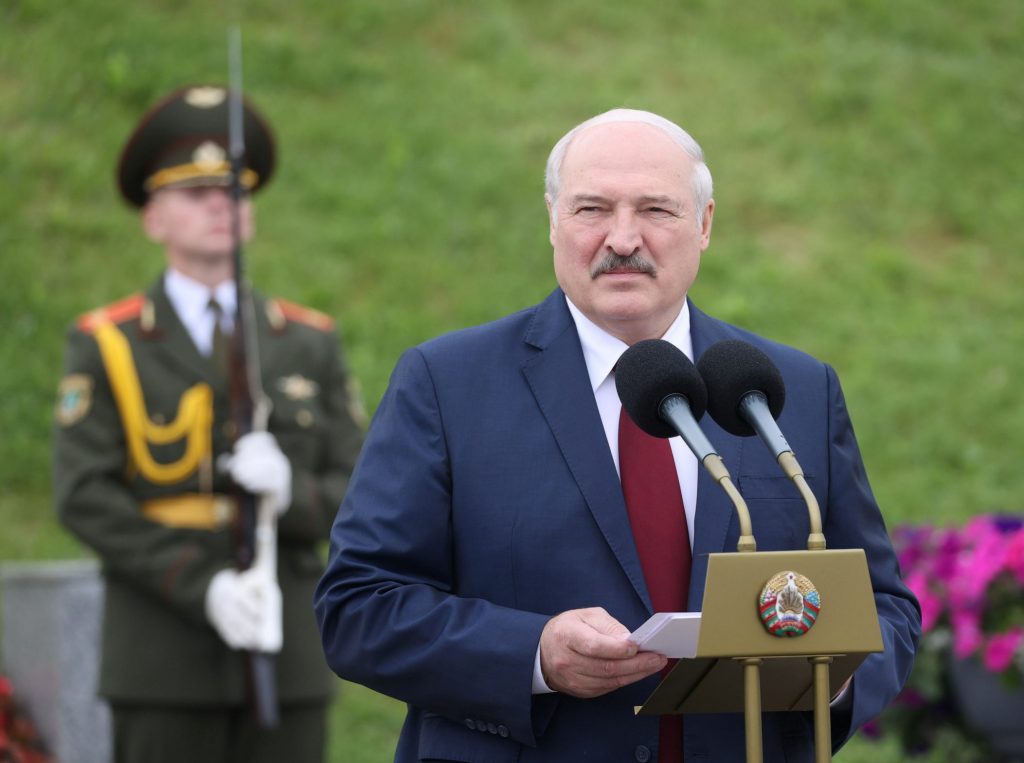 The autocratic regime of Alyaksandr Lukashenka is intensifying its ongoing cold war against Europe.

Over the course of the past week, the Belarus dictator threatened to disrupt international supply chains between Europe and Asia, called for the closure of the international border with Ukraine, and announced provocative military exercises near the Belarusian frontier with EU and NATO members Poland and Lithuania. Those moves come as Lukashenka also doubled down on his ongoing efforts to provoke an illegal migration crisis in Europe.

The conflict between Lukashenka and Europe has been escalating since the disputed August 2020 presidential election in Belarus, which sparked mass protests and a brutal crackdown. These tensions have escalated markedly and steadily following the effective hijacking in May 2021 of Ryanair Flight 4978, which was en route from Athens to Vilnius through Belarusian airspace, and the arrest of dissident journalist Raman Pratasevich, who was on board.

Speaking in Minsk on July 6, Lukashenka ordered his government to take steps to block the transit of goods from the European Union to Russia and China in retaliation for EU sanctions. “First: not a step inside the Belarusian market; second: not a step through Belarus either,” Lukashenka said, adding that Germany and other EU nations should “supply their products to China and Russia through Finland. Or through Ukraine.”

If Lukashenka follows through on this threat, it could be enormously disruptive to international supply chains.

Back in June, the International Federation of Freight Forwarding Associations (FIATA) noted that Belarus is a major artery for east-west transport and a key rail corridor, warning: “interruptions to this route may have significant impacts on the Eurasian landbridge.” FIATA officials added that 80 percent of current rail freight capacity between Europe and Asia passes through Belarus.

In addition to these economic threats, the Lukashenka regime is also engaging in intimidation and saber-rattling against Belarus’s European neighbors. The Belarus Defense Ministry announced on July 6 that the country’s armed forces would be conducting military exercises in the Hrodna region near the border with Poland and Lithuania.

Days earlier, on July 2, Lukashenka announced that he was closing the country’s border with Ukraine, claiming without evidence that a “huge amount” of weapons were being smuggled across the frontier. Lukashenka additionally alleged, also without evidence, that “terrorist sleeper cells” tied to Germany, Lithuania, the United States, Poland, and Ukraine had been uncovered in Belarus.

And this week, Lukashenka doubled down on what appears to be a policy of provoking an illegal migrant crisis in Europe, saying: “We will not hold anyone back. We are not their final destination, after all. They are headed to enlightened, warm, cozy Europe.” Lukashenka accused Lithuania, which has been publicly critical of Belarus for its migration policy, of “whining.”

In an interview on June 27, Lithuanian Interior Minister Agne Bilotaite accused Belarusian officials of orchestrating a surge of migrants from Iraq, Iran, and Syria into Europe via Belarus, calling the effort a “well-organized” plan, a form of hybrid warfare, and a “profitable crime involving the regime.”

On July 2, Lithuania declared a state of emergency on its border with Belarus after 150 migrants illegally crossed the frontier in a single day. Lithuanian Foreign Minister Gabrielius Landsbergis wrote on Twitter that Lukashenka is seeking “to weaponize migration to weaken our resolve for sanctions.”

Belarus moved last week to sever its ties with the European Union, recalling its envoy to Brussels and suspending participation in the EU’s Eastern Partnership program. The move was officially justified as retaliation for sanctions imposed by the bloc following the Ryanair incident.

But in a bold and unconventional move, the EU made clear that it plans to continue Eastern Partnership programs with Belarusian society. “Despite the decision by the Lukashenka regime to suspend Belarus participation in the Eastern Partnership, we are ready to continue working with the Belarusian people to strengthen bonds, foster regional cooperation, and tackle joint challenges,” Josep Borrell, the EU’s chief diplomat, wrote on Twitter.

Indeed, as relations between Lukashenka’s autocratic regime and the EU deteriorate, Europe has tightened its embrace of the Belarusian opposition. For example, Landsbergis announced on July 5 that Lithuania’s Foreign Ministry had granted the Belarusian pro-democratic opposition led by Svyatlana Tsikhanouskaya official status in that country.

A confidential unpublished report by the Minsk-based Center for Strategic and Foreign Policy Studies noted that “the non-recognition of the Belarusian authorities’ decision to break off relations with the EU was an original move” by Brussels that appeared aimed at the “further international delegitimization of Lukashenka’s regime.”

Relations between the autocratic regime in Minsk and Europe appear to have crossed the point of no return and look set to deteriorate further. Which makes it all the more vital for the West to continue and intensify its outreach to the opposition, civil society, and the Belarusian diaspora. Not only is this smart policy; it also puts the West on the right side of history.