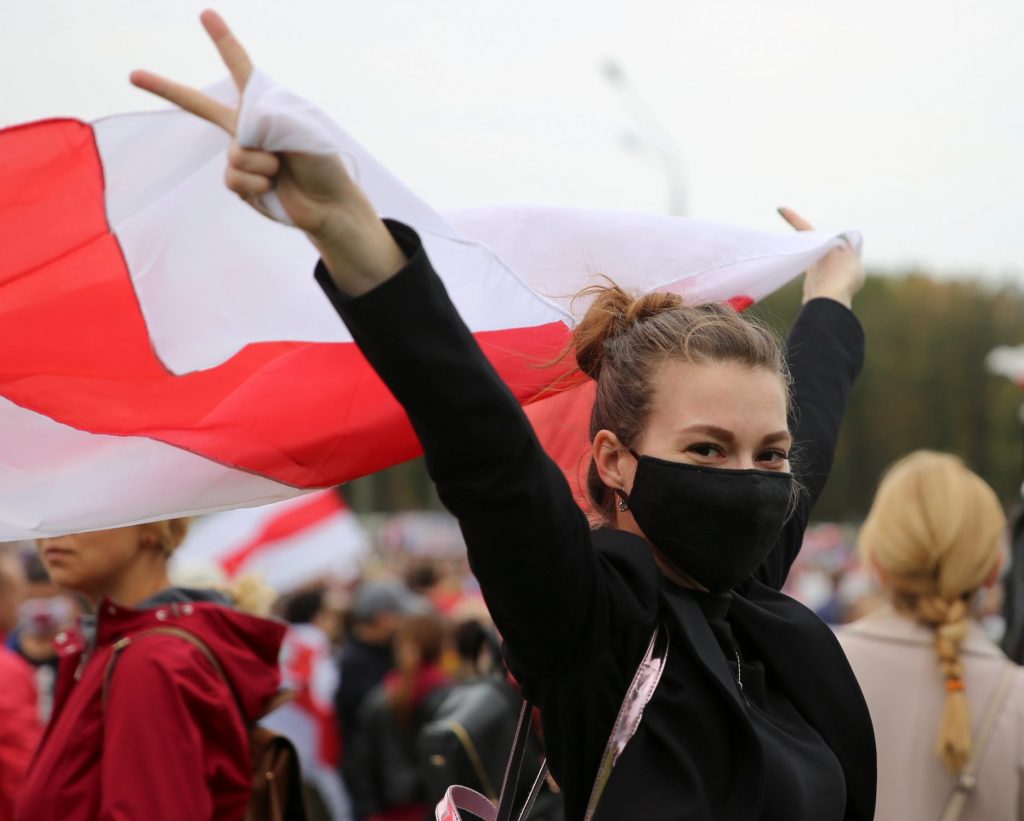 Russia announced this week that it has placed Belarusian opposition leader Sviatlana Tsikhanouskaya on its wanted list. The move is a further blow to the protest movement in Belarus, which has spent much of the past two months denying an anti-Russian agenda and seeking to involve the Kremlin in efforts to resolve the present crisis. This has proven futile, largely because Moscow regards any attempts to promote democracy in its neighborhood as intrinsically anti-Russian.

The Russian Interior Ministry has yet to provide details of any criminal charges against Tsikhanouskaya, while Russian media have reported that her listing appeared automatically in line with the terms of the Union State agreement between Russia and Belarus. Even if it is purely symbolic, Tsikhanouskaya’s criminal status underlines Moscow’s uncompromising approach to the uprising currently taking place on its doorstep.

Since protests first broke out in Belarus following the country’s deeply flawed August 9 presidential election, Tsikhanouskaya has gone to considerable lengths to counter claims of Russophobia. Speaking to members of the European Parliament via video link on August 25, she spelled out the Belarusian opposition movement’s neutral stance. “The revolution in Belarus is not a geopolitical revolution,” Tsikhanouskaya stated. “It is neither an anti-Russian nor a pro-Russian revolution. It is neither anti-EU nor pro-EU. It is a democratic revolution.” She has repeated similar messages in numerous subsequent meetings with European leaders.

Tsikhanouskaya’s motivation is clear. She is desperately trying to prevent Belarus’s pro-democracy movement from being caught up in the geopolitical struggle between Russia and the Western world. Having seen how the Kremlin responded to Ukraine’s 2013-14 Euromaidan protest movement by seizing Crimea and invading eastern Ukraine, she has good reason to be wary of a repeat performance.

So far, her protestations of geopolitical neutrality have not prevented Moscow from providing beleaguered Belarusian dictator Alyaksandr Lukashenka with substantial support. Tsikhanouskaya has also failed to convince the Kremlin to meet with representatives of the opposition’s Coordination Council.

Tsikhanouskaya is not alone in arguing against geopolitical interpretations of the ongoing Belarusian uprising. Numerous international commentators have also pointed out that unlike events in Ukraine seven years ago, there is no obvious geopolitical component to the anti-regime protests currently underway in Belarus. On the contrary, protesters have stressed their support for continued close bilateral ties with Russia, while polls suggest minimal support for a more Western-oriented foreign policy.

Limited evidence of growing anti-Russian sentiment has begun to emerge in recent weeks, but only in direct response to the Kremlin’s vocal support for Lukashenka. Meanwhile, many prominent figures within the ranks of the Belarusian opposition have a history of close personal ties to Russia and have previously voiced opinions on key geopolitical issues that tally closely with official Kremlin narratives.

If the protest movement in Belarus is genuinely interested in maintaining good relations with Russia, why has Moscow’s reaction been so hostile?

The answer to this question lies in the demands of the protesters themselves. For the past two months, they have consistently eschewed complex political or geopolitical positions in favor of straightforward calls for an end to state violence, the release of political prisoners, and free elections. In other words, they want democracy. This simple demand has been enough to convince Moscow that the protests pose a direct threat to Russia’s regional influence and the country’s own authoritarian regime.

The Kremlin is painfully aware that sooner or later, a free and democratic Belarus would begin to turn westwards. Since the fall of the USSR, Russia has already witnessed this process unfold on countless occasions from the Baltic to the Balkans. The stultifying stability offered by post-Soviet dictatorships has proven no match for the relative social mobility and rule of law advantages available in even the most flawed of European democracies.

Over the past three decades, Moscow has watched through gritted teeth as one Cold War era ally after another has rejected Russia in favor of the EU. Even historically close nations such as Serbia are now increasingly inclined to align themselves with Brussels and envisage their future as part of the West. In light of this bitter experience, it is entirely reasonable for Russia to assume that Belarus would eventually follow a similar trajectory if permitted to do so.

Faced by its own inability to compete in a soft power contest with the infinitely more appealing West, modern Russia has been forced to adopt the geopolitical equivalent of spoiling tactics. In practice, this has meant seizing on any opportunity to deepen social divides or otherwise sow chaos within the Western world, while at the same time pumping out negative propaganda at home designed to discredit democracy.

Moscow has also demonstrated its readiness to use force. The most notorious example of this was the spring 2014 hybrid attack on Ukraine, which was sparked by the success of a pro-democracy uprising in Kyiv and remains ongoing. More recently, Putin has declared his willingness to send Russian security forces into Belarus if the Lukashenka regime looks to be losing control over the country’s protests.

The Kremlin’s dismay over the spread of democracy extends beyond the fear of losing international influence. Vladimir Putin and many of his inner circle are Cold War veterans whose definitive political experience remains the collapse of the Soviet Union. They are haunted by the prospect of a second crash and inclined to regard any stirrings of democracy in their neighborhood as ominous precursors of a possible future Moscow Maidan that would bring down Putin’s own authoritarian regime.

Recent events in Belarus have served to heighten these concerns, as have ongoing anti-Kremlin protests in Russia’s own restive Far East. Meanwhile, this week’s upheavals in Kyrgyzstan represent a further alarm call for Moscow that hints at the instability of the post-Soviet settlement and the vulnerability of Russia’s rulers.

This leaves the Kremlin with little choice but to vigorously oppose the protest movement in Belarus. Russian intervention is already considerable, with teams of Kremlin propagandists and significant financial support arriving in Minsk over the past few months. More Russian backing will follow if necessary, potentially prolonging the current crisis indefinitely.

Moscow knows the protesters in Belarus are not driven by Russophobia, but the democratic aspirations of the uprising nevertheless make it a direct threat to Russian interests. Well-meaning Belarusians like Sviatlana Tsikhanouskaya will continue to deny it, but as far as the Kremlin is concerned, any pro-democracy revolution in the post-Soviet space is inevitably and inescapably anti-Russian.