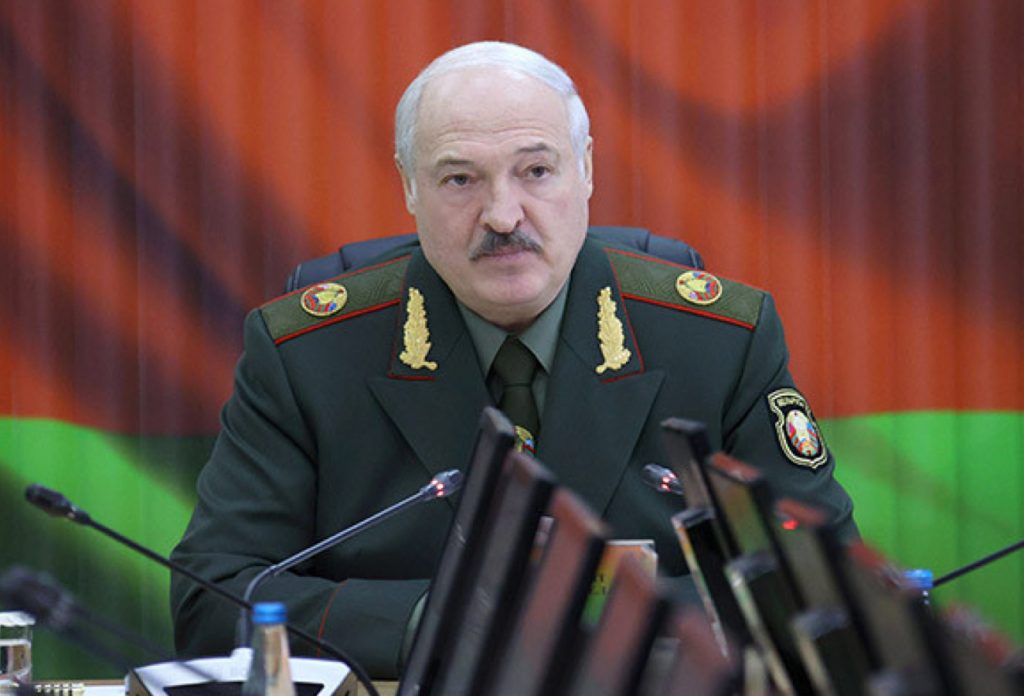 The axis of autocrats is opening up a second front against Ukraine, and they are doing it in plain sight.

As Russia continued to mass tens of thousands of troops on its border with Ukraine, Alyaksandr Lukashenka said on November 29 that his forces “will not stand aside”  in Moscow’s confrontation with Kyiv and “it is clear whose side Belarus will take.”

As if on cue, Lukashenka’s Defense Minister Viktor Khrenin announced the same day that Belarus and Russia will hold joint military exercises along the Belarusian border with Ukraine.

So there you have it. The dictator of Minsk has enthusiastically joined in with the autocrat in the Kremlin’s border brinkmanship. Ukraine is now facing the threat of armed conflict on two fronts.

Long gone are the days when Lukashenka vowed that he would never allow his territory to be used by Russia to attack a third country. Fully dependent upon largesse from the Kremlin, Lukashenka has gone all in with Vladimir Putin’s revanchism.

Taken together with the steady expansion of Russia’s military footprint in Belarus, this amounts to the most serious change in the security equation on NATO’s eastern flank since Russia’s forceful and illegal annexation of Crimea and armed intervention in eastern Ukraine’s Donbas region in 2014.

This has not gone unnoticed by Belarus’s western neighbors. Speaking at a press conference with NATO Secretary General Jens Stoltenberg on November 28, Lithuanian President Gitanas Nauseda said the alliance needed to adjust to the new reality of “total military integration” of the Belarusian armed forces into Russian military structures. “This brings new challenges to NATO, and NATO should accordingly adapt its plans, strategy and tactics, to be ready to respond,” Nauseda said.

Likewise, Latvia’s Defense Minister Artis Pabriks said on November 29 that his country needs a permanent US military presence and Patriot missiles to deter the escalating threat from Moscow and Minsk.

In the past, it has been commonplace for Western officials to dismiss warnings from the Baltic states about the threat from Moscow as mere hyperbole. But the fact of the matter is that these warnings have consistently turned out to be correct, and they are correct now.

The effective merger of the Russian and Belarusian armed forces and the expansion of Moscow’s military footprint in Belarus are very real.

Russia and Belarus have conducted a record number of joint military drills in 2021, culminating with the massive Zapad exercises in September. The constant rotation of forces, according to military analyst Michael Kofman, effectively establishes a permanent Russian troop presence in Belarus.

Russia has sent Sukhoi Su-30 fighter jets to the Baranovichi air base in western Belarus. The jets and their Russian pilots will be permanently based in Belarus, where they will fly joint missions and patrol the two countries’ borders. Russian anti-aircraft missile troops have also deployed to the western Belarusian city of Hrodna near the border with Poland and Lithuania to set up a joint military training center.

Moreover, Lukashenka also appears ready to drop his long-standing objection to a new Russian airbase on Belarusian territory. The base would be located in Babruysk in eastern Belarus, and would station SU-27 fighter jets manned by Russian pilots.

At a time when the United States is increasingly focused on the emerging geopolitical threat from China, and as voices in the administration of US President Joe Biden aim to “park” the Russia problem by establishing a “predictable adversarial relationship” with Moscow, the threat in the European theater has only escalated.

For the past year, the steady militarization of Belarus and the merger of the Russian and Belarusian armed forces has continued apace. Belarus is now effectively an extension of Russia’s Western Military District, with grave security consequences for NATO members Latvia, Lithuania, and Poland as well as for Ukraine.

And with Lukashenka now joining in with Putin’s brinkmanship on the Ukrainian border, the threat is metastasizing. Rewarding the Kremlin leader with the second summit meeting with Biden that he is apparently angling for will only encourage more acts of aggression. Instead, NATO needs to respond with appropriate measures, including increasing troop presence on its eastern flank, to protect its members and partners.