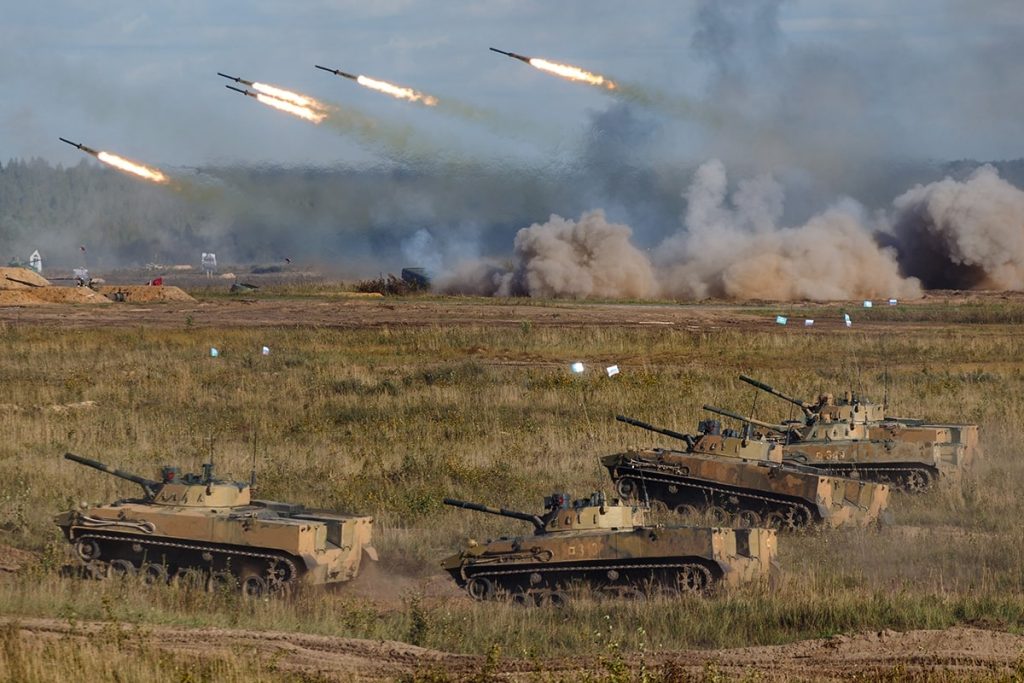 With war raging in Ukraine’s east and south, there are mounting concerns that the threat to the country’s north and west, including the capital Kyiv, could soon return.

Alyaksandr Lukashenka said on June 10 that Belarus may be forced to enter the war to fight for the west of Ukraine so that it is “not chopped off”  by NATO. The Belarusian dictator’s remarks came as Minsk was reinforcing its electronic warfare capabilities along the Ukrainian border, according to a Facebook post by the Ukrainian General Staff. “Combat engineering tasks are being performed to reinforce checkpoints and deploy additional electronic warfare equipment in the areas near the border between Belarus and Ukraine,” the General Staff wrote.

Additionally, Belarus has been conducting military exercises in the area and Lukashenka has announced the creation of an operational command for troops on the border with Ukraine. Russia has recently deployed nuclear-capable Iskander missiles, Pantsir-S1 anti-aircraft gun systems, and S-400 anti-aircraft missile systems near the frontier. Alongside these developments, Lukashenka has announced  the purchase of S-400s and Iskanders from Russia. The Belarusian autocrat has also ordered the creation of a “people’s militia.”

According to a confidential unpublished report by the Center for Strategic and Foreign Policy Studies, Lukashenka met in early June with Ihar Shunevich, the former Interior Minister who now heads the Belarusian Society of Hunters and Fishermen, and ordered him to provide five thousand men for the militia. The report also noted that Russian Private Military Companies like the Wagner Group have been actively recruiting Belarusians recently.

There is much speculation over whether this heightened military activity in Belarus indicates that Russia is preparing to launch a new offensive into northern Ukraine. The Atlantic Council’s Peter Dickinson wrote recently in this space that “skeptics see the moves as an elaborate Kremlin-choreographed Belarusian bluff with the objective of forcing Ukraine to strengthen its northern defenses while preventing the redeployment of Ukrainian troops to the current focal point of the war in the country’s eastern Donbas region.”

Likewise, Scott Rauland, the former chief of mission at the US Embassy in Minsk, told The Daily Beast that Lukashenka appears to be staging an elaborate show of loyalty to Putin. “The only explanation for him taking whatever action has been taken or that is being contemplated is that he is under duress from Putin to demonstrate loyalty and that he is probably expecting additional financial support from the Kremlin,” Rauland said.

Nevertheless, the authorities in Kyiv appear to be taking the threat seriously. Mykhailo Podoliak, an advisor to Ukrainian President Volodymyr Zelenskyy, said in an interview with the Belarusian newspaper Zerkalo that Kyiv is preparing “for different scenarios” and that Ukrainian intelligence is “monitoring all movements, initiatives, training, and distribution of weapons to hunters.” Podoliak added that “if Belarus wants to see what mass deaths of military personnel look like, then perhaps it should enter Ukraine.”

Regardless of whether Belarus is preparing to enter the war, is engaged in an elaborate bluff, or if Lukashenka is simply performing an over-the-top ritual to demonstrate his loyalty to Putin, the recent military activity highlights the impossible position the Belarusian dictator now finds himself in.

If Russia’s war in Ukraine is successful and Putin is strengthened as a result, Belarus’s sovereignty and independence will likely be in grave danger and Lukashenka will become dispensable. Alternatively, if Russia loses the war in Ukraine and Putin is weakened, Lukashenka will lose his only patron and protector making him vulnerable to the wrath of his own people. Either way, Lukashenka is poised to lose out and he likely understands this.

In an interview with Newsweek, Belarusian opposition leader Sviatlana Tsikhanouskaya said the same guerilla tactics Belarusian dissidents used to disrupt Russia’s war against Ukraine, which included hacking and sabotaging rail lines, can also be used in what she called “the last fight” against Lukashenka. The dictator “understands that more and more people are against him because he is selling our independence. I’m sure that when we feel this moment, at the weakest point of the regime, people will rise up again,” she said.

In this sense, the battle for Ukraine is also a battle for the future of Belarus. The United States and its allies should get ahead of the curve and recognize Tsikhanouskaya’s government in exile as the legitimate government of Belarus.

Belarus dictator Alyaksandr Lukashenka has initiated steps to shut down the country’s independent trade unions amid growing disquiet on the domestic front over the Belarusian role in Putin’s Ukraine War.