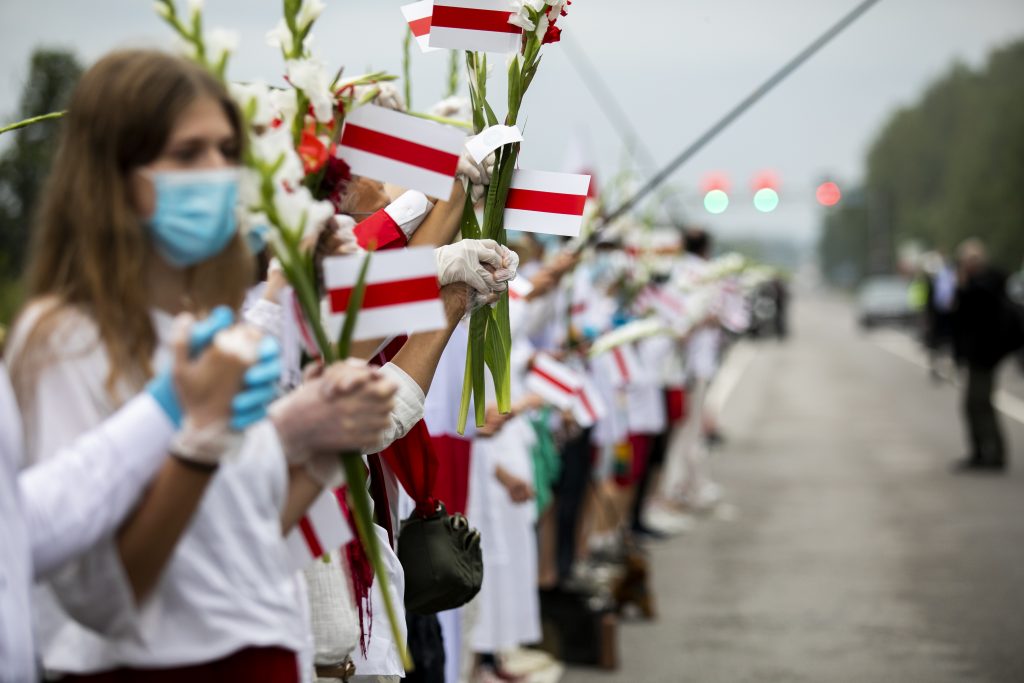 Today, August 23, is also the anniversary of the Baltic Way, when in 1989, the people of Estonia, Latvia, and Lithuania held hands to form a human chain across their nations, joining together in unity for freedom. Their simple, but daring act rallied the world in support of the Baltic states regaining their independence. That day, average citizens reclaimed their basic dignity by taking part in a mass democratic movement. In turn, their nations won back their ability to determine their own destiny.

To mark that anniversary, and to do so in solidarity with the people of Belarus today who yearn for that same freedom, Americans joined together to form a human chain and marched from the Lithuanian Embassy to the Belarusian Embassy. So many who immigrated from or trace their roots to Central and Eastern Europe came together with other Americans and foreign nationals who have dedicated their careers, if not their lives, to the cause of freedom.

Our message was for the people of Belarus: We see you. We hear you. We stand with you. We support you.

A remarkable popular civil resistance movement is unfolding across one of Europe’s last authoritarian strongholds. Research shows that these peaceful movements are the most effective means to advance human rights and democracy and to combat corruption and dictatorship. These movements reduce violence at home and produce peace with their neighbors.

This struggle is the struggle for the people of Belarus. They started this and they are in charge, despite regime accusations to the contrary. But for those of us who support their struggle for freedom, we can help. In fact, we have argued at the Atlantic Council that there is an international right to assist nonviolence civil resistance movements. These movements are an essential, effective alternative to violence or military options.

These protest movements are complicated as they are not hierarchical. They can be disruptive. They are driven by popular energy. They become more effective as more people engage. And they provide safety for regime defectors to join the side of the people. They are in charge—not outsiders—as it should be.

However, the international community can play our role by backing the movement’s demands, in this case, for free and fair elections. We can help by ensuring that those on the streets risking not only their livelihoods, but also their lives, know their message is heard and is supported around the world. We can send clear messages to those who might intervene, whether Lukashenka’s security forces or Moscow’s, that they will face severe consequences if they do.

Hopefully, US Deputy Secretary of State Stephen Biegun’s upcoming trip to Moscow, along with EU efforts, are sending a firm, coordinated message.

We can show Lukashenka that he has a peaceful way out before his time runs out. And we can begin preparing to help the people of Belarus secure a more democratic, prosperous future.

For too long, freedom has been delayed in Belarus, but its people are insisting that it cannot be denied.

Image: People make human chain from Vilnius to Belarus border in support of Belarus people protests against Lukashenko on the 31st anniversary of the Baltic Way (via Reuters)