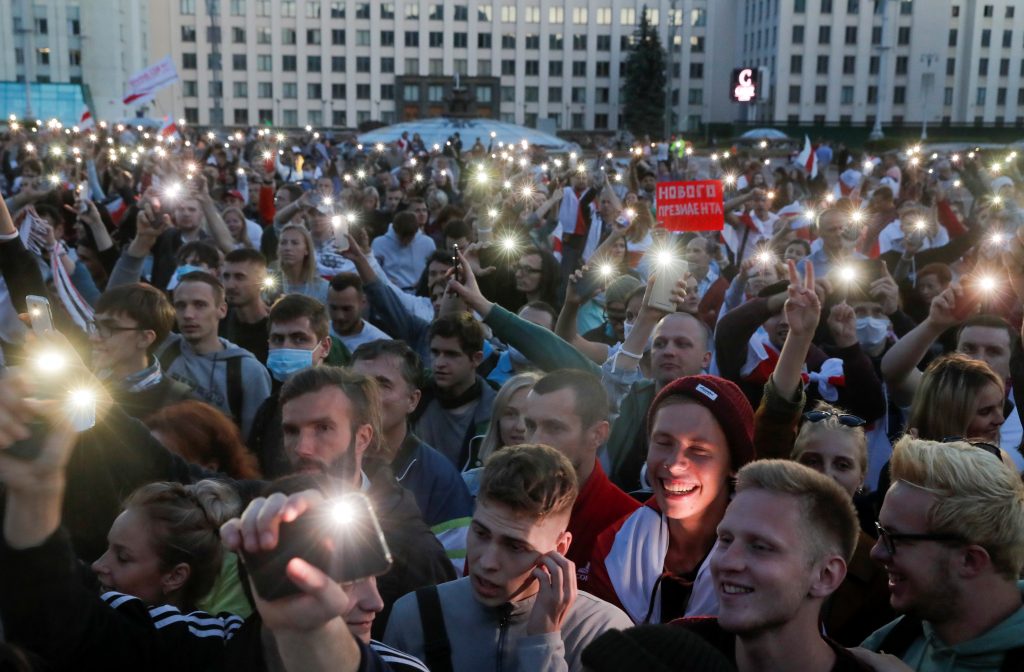 Almost two weeks since prodigious nightly demonstrations began in Belarus over a transparently stolen presidential election, the outcome of the crisis may rest in the hands of the country’s factory workers. While the mass protest movement that erupted on August 9 has won global attention and shaken the Lukashenka regime to its foundations, regular rallies will not be sufficient to topple a deeply entrenched, 26-year dictatorship. Opposition leaders recognize this and have attempted to initiate a nationwide general strike, but these efforts now appear to be faltering.

President Lukashenka has a real credibility problem with Belarus’s large blue collar constituency. As the protests entered their second week last Monday, he was rudely heckled by a supposedly handpicked audience during what was meant to be a morale-boosting visit to one of Minsk’s many large manufacturing plants. Nevertheless, his ruthlessness and defiance may be paying off.

Workers at many of Belarus’s most renowned factories such as Atlanta and the (MTZ) Minsk Tractor Works had initially seemed ready to join the protests, but management has since succeeded in pressuring most into submission. Sporadic strike action continues, but the current situation is far short of the general strike required to regain the momentum from a government that remains largely in control of the country despite a catastrophic loss of legitimacy.

Lukashenka has been personally active in countering the threat of nationwide industrial action. At one point during the past few days, he threatened striking workers with dismissal and promised to import unemployed Ukrainians to take their places. The head of the Ukrainian Miners Union was forced to issue a salutary response proclaiming that Ukrainian workers would stand in solidarity with their Belarusian comrades.

As the disputations for the loyalties of working class Belarusians play out, the demonstrations continue. The Belarusian opposition has been able to muster respectably large crowds of demonstrators every evening all across the country. I have dutifully shown up at Independence Square in Minsk every night for the past week to count their numbers and talk with them.

Committed protesters do arrive each evening en mass but there is no Maidan-style tent city and they do not bother to occupy territory. At any given moment, all sorts of different protests take place across various parts of Minsk. Women dressed in white wave flowers at passing cars along the side of the highway. Young men stand in fidgety silence in memory of those beaten and killed during the initial post-election crackdown. Pockets of spontaneous folk-singing and dancing add to the romantic atmosphere. A column of bikers riding Harley motorcycles may careen down one of Minsk’s grandiose boulevards while pedestrians cheer them on.

I have continuously tried to engage the protesters to gain a sense of their hopes and motivations. Do they want to improve relations with the EU? Do they like America? Are Russians still fraternal brothers? Are they ready for a decommunization process? When posing this last question, I have often playfully pointed to the gigantic statue of the founder of the Soviet state under which they wave their alternative Belarusian national flags. What will come next? Will they begin taking down statues of Lenin after Lukashenka leaves? None of these issues is high on the agenda among protesters. “We are not thinking about those things, we will think about all that once the dictator leaves,” they typically reply.

The protesters are generally very sweet, polite, and peaceful. Many are young, middle class Belarusians who work in the country’s booming IT industry and come to rallies dressed in form-fitting hipster ensembles. Unlike events in Kyiv in 2013-14, there is no militant edge to the demonstrations. Indeed, this revolution is so velvet that at times it feels positively sleepy. For better or worse, there is a marked absence of the rough and stalwart young men capable of making liberals uncomfortable or leading the resistance if and when the authoritarian state decides to deploy force.

Among the red and white flags of Belarus’s short-lived early twentieth century statehood bid on display on Saturday, a single older gentleman holds up the banner of the MTZ Minsk Tractor Works. He appears as a lone identifiable representative of the factory workers who is not afraid to protest. He has white hair and is slim, while his hands are calloused and gnarled. I ask when his colleagues will join him on the square. “Only when they have felt the trouble that came knocking on my door,” he tells me, before producing his phone and displaying pictures of his 33-year-old son’s badly bruised legs and buttocks. These gruesome markings have become the calling card of Lukashenka’s OMON riot police. “The others are afraid for their livelihoods. But me, I have had enough. They think I am livestock just because I work on an assembly line, but I am a man.”

The revolutionary uncertainty in Minsk is generating a curious atmosphere that is brimming with tense foreboding but is also oddly nonchalant and, at times, festive. When asked what they think will happen next, most observers here in Minsk base their predictions on two factors. The first issue is whether the country’s army and interior ministry troops (rather than the demonstrably savage but not so numerous OMON) are ready to open fire on mass demonstrations of their fellow citizens. The second is whether the country’s working classes can be persuaded to unify in a genuine general strike. Nobody, from the charming hipster demonstrators to the political classes, has yet been able to provide me with a convincing answer to either of these two seemingly decisive questions.

As the crisis approaches its third week, Lukashenka is seeking to reassert his authority. After an initial bout of somewhat pathetic public pleading for assistance from Moscow, the regime has reconstituted its energies and is now going on the counter-offensive. Teams of Russian media professionals have been brought in to run Belarusian state TV and lead the information war. Sinister propaganda videos featuring the burnt ashes of Kyiv’s Maidan square during the climatic moments of Ukraine’s 2014 revolution now fill the commercial gaps between shows on Belarusian television. The regime has begun deploying Kremlin-friendly rhetoric against protesters, including warnings of “Russophobia” and an “assault on the Russian language.”

Meanwhile, Lukashenka has started appearing at army bases in military fatigues. He has somewhat theatrically mobilized the Belarusian army on the Lithuanian border under the ludicrous pretext of counter measures against an “imminent” NATO invasion. Recordings have surfaced of the Belarusian Defense Minister preparing his generals for the possibility of civil war. Everything indicates Lukashenka’s willingness to fight on and his readiness to use overwhelming force. Ominously, he has warned protesters that they have until Monday to consider their position.

Events in Belarus since August 9 have been genuinely unprecedented. Many here in Minsk say the country will never be the same again. But there are huge questions over the next chapter in this remarkable story. A solid national majority, perhaps even a super-majority, appears to want a transition to liberal democracy, but the resistance of the Lukashenka regime is strengthening by the day. With Russia now seemingly standing firmly behind Lukashenka, photogenic rallies and patchy strike action will not be enough to bring about historic change.

Vladislav Davidzon is the European Correspondent for Tablet magazine. His book of Ukrainian reportage “From Odessa With Love” will be published in November from Academica press.