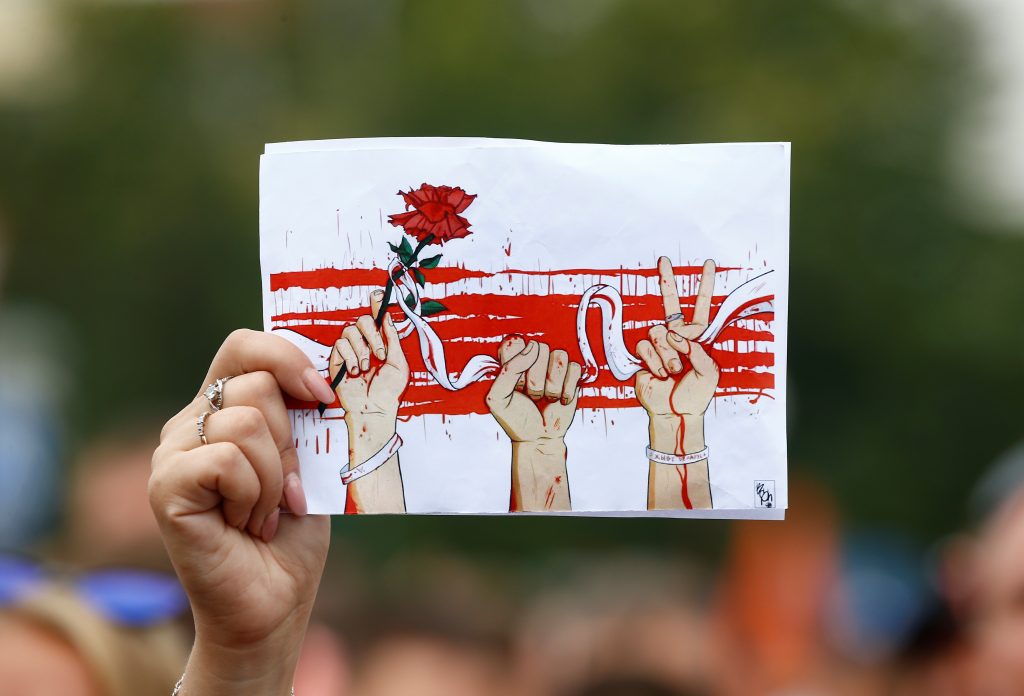 Events continue to move at lightning pace in Belarus. The country has been gripped by a pro-democracy uprising since August 9, when a deeply flawed presidential election sparked nationwide protests against the dictatorial rule of five-term president Alyaksandr Lukashenka. The unprecedented scale of these protests initially overwhelmed the Lukashenka regime and looked set to produce an historic victory for the diverse forces of the country’s democratic opposition. However, a lack of coordination between the different elements within the protest movement now leaves it vulnerable to the divide and conquer tactics of the authorities. This places the ultimate outcome of the crisis in doubt.

As the second week of the uprising draws to a close, daily protests on the streets of the country’s towns and cities remain the primary focus. These protests are not entirely leaderless, but they rely mostly on anonymous coordination via the telephone messaging app Telegram, which is beyond the reach of the Belarusian authorities.

The demands of the street are both clear and radical: protesters want Lukashenka gone; they demand free elections; and they want all political prisoners freed. This leaves little room for nuanced negotiations and may be hindering defections among officials within the Lukashenka regime who might otherwise be ready to discuss switching sides.

A second and parallel element of the protest movement is the push for a nationwide general strike. This initially made solid progress, with more and more of Belarus’s flagship industrial enterprises announcing their readiness to join the strike. However, by August 20, many were already back at work amid threats of legal action and other forms of intimidation from the authorities.

These reversals highlighted the vulnerability of Belarusian workers in a country where there are no independent trade unions. They also underlined the shortcomings of a movement that currently lacks the kind of centralized structures capable of safeguarding the interests of its participants.

In a bid to address this absence of leadership, opposition figurehead and presidential candidate Sviatlana Tsikhanouskaya announced the creation of a Coordination Council on August 14. This diverse Council already has dozens of members drawn from across Belarusian society, and the list is still growing. It features representatives of the country’s intelligentsia and business communities along with an eclectic mix of labor officials, students, and activists.

Officially, the role of the Coordination Council is to oversee the transfer of power away from the current authorities. Lukashenka was initially slow to respond to the creation of this rival political body, but on August 20, the Belarus chief prosecutor launched a criminal case against opposition leaders, accusing them of trying to seize power. However, it remains to be seen whether this fledgling body is capable of taking responsibility for the country.

The Coordination Council has already selected seven leaders. Nobel Prize-winning Belarusian author Svetlana Aleksievich is the most prominent of the seven. Widely recognized as one of the leading moral authorities in contemporary Belarusian society, Aleksievich has long been an active critic of Lukashanka. The internationally-acclaimed author is also regarded with considerable distaste in Moscow, where she is regularly demonized in the Kremlin media alongside fellow Coordination Council leader Pavel Latushko.

Latushko is the most senior establishment figure within the emerging leadership of the pro-democracy opposition, having previously served as minister of culture and Belarusian ambassador to France. He also has a significant political pedigree and hails from a family that participated in the anti-Soviet independence movement during the 1980s. Latushko enjoys considerable popularity among liberal audiences and is seen as a key voice of the new Belarus, but he lacks the gravitas to negotiate with senior members of the security apparatus or the credentials to find a common language was working class Belarusians.

Any engagement with Belarus’s significant blue collar contingent will likely be the responsibility of Siarhei Dyleusky, a no-nonsense figure who some are already calling the Belarusian Che Guevara. A labor leader at the iconic Minsk Tractor Plant, Dyleusky has enjoyed meteoric rise in recent days and now finds himself on the Coordination Council among a select group of potential national leaders. He caught the eye by leading striking workers and joining in the heckling of Lukashenka during the beleaguered president’s disastrous Ceausescu-style appearance at a Minsk factory earlier this week.

The Coordination Council also features a number of members drawn from the professional classes. Maxim Znak and Lilia Ulasova are lawyers who are expected to play important roles in the attempt to move beyond today’s mass protests towards a national political transition. Znak has been involved in this year’s presidential campaign since the early stages, having first served as the spokesperson for imprisoned presidential candidate Viktar Babaryka’s bid before eventually joining Tsikhanouskaya’s unified campaign. Meanwhile, Ulasava is a professional negotiator. Their presence on the Coordination Council helps add to its credibility as a pragmatic political body rather than a hodgepodge of activists and intellectuals. The pair are set to take the lead in negotiations with regional administrations, senior regime officials, and members of the security services.

The real leaders of the Coordination Council are Maria Kalesnikova and Volha Kavalkova, both of whom were prominent in Sviatlana Tsikhanouskaya’s presidential campaign. Kalesnikova represents the Viktar Babaryka campaign team, while Kavalkova represents Tsikhanouskaya, who remains in temporary exile in neighboring Lithuania. As well as her ties to the presumed winner of Belarus’s contested August 9 presidential vote, Kavalkova is also close to the Belarusian Christian Democratic party. As such, she serves as an important link between the country’s traditional and new opposition forces.

The Coordination Council is still very much a work in progress, but it already represents the main threat to Lukashenka’s power vertical. With the national protest movement still less than two weeks old, this is the first attempt to create a credible alternative to the Lukashenka regime. In order to gain the ascendancy, the Coordination Council must now secure domestic and international recognition. This is essential if the country is to avoid further dangerous escalations and undergo a peaceful transition of power.

Any transition is likely to prove easier said than done. Hopes for a rapid settlement of the crisis are fading fast. After beginning the week with talk of compromises, Lukashenka is now becoming increasingly bullish and appears buoyed by strong support from Russia. In the past two days, the security forces have begun trying to reassert their street-level authority over protesters, and prominent members of the opposition have been subjected to acts of vandalism and harassment. Meanwhile, Russian nationals have been brought in to staff Belarus state TV and a regime informational counter-attack is currently underway. Nevertheless, the momentum still remains firmly with a protest movement that enjoys massive popular support in its struggle against a regime widely seen as illegitimate.

At present, the Coordination Council provides a degree of clarity for government officials and international observers looking to gain a better understanding of who represents the diverse opposition movement. However, it is not yet an effective tool for national leadership. In order to become a genuine engine for change in the country, the Council must occupy the political vacuum at the forefront of Belarus’s democratic uprising. Leaderless street protests have shaken the Lukashenka regime to its foundations, but they are not enough to bring about the kind of historic transition to democracy that millions of Belarusians now expect.

Image: A protester holds a placard at a rally of striking workers at the potash producer Belaruskali in Salihorsk, Belarus. August 19, 2020. REUTERS/Vasily Fedosenko