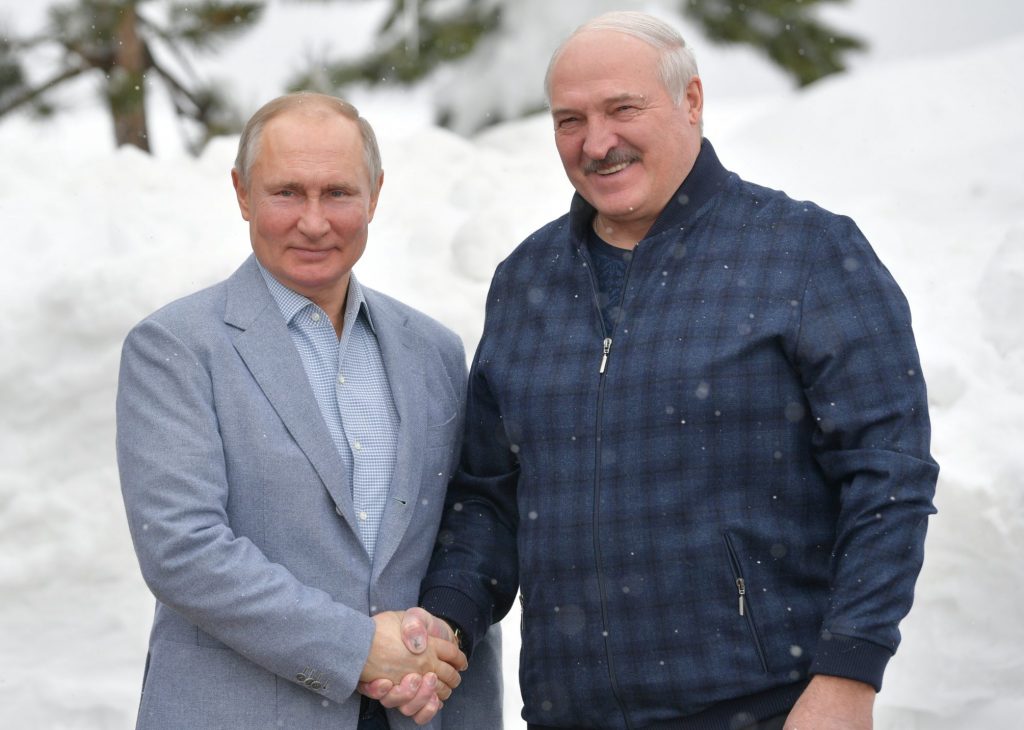 Kremlin spokesman Dmitry Peskov said this week that there are no discussions underway about unifying Russia and Belarus. Peskov’s remarks in an interview with Argumenty i Fakty on March 30 were just the latest attempt by a senior Russian official to insist that we should all move along because there really is nothing to see here.

Earlier this month, Grigory Rapota, the outgoing Secretary of the Russian-Belarus Union State, said a formal merger of the two countries is a “far-fetched” idea that is not on the agenda. Along the same lines, Russia’s outgoing ambassador to Minsk, Dmitry Mezentsev, said Moscow has no intention of creating a single army with Belarus.

These denials are an indication that we should be increasingly vigilant about what Moscow is really up to in Belarus. And this is not only the case because it has become something of a running joke that we should never believe anything about Russia until the Kremlin denies it.

The statements by Peskov, Rapota, and Mezentsev are probably technically true. We are unlikely to witness a formal unification of Russia and its smaller western neighbor; nor will we see a full merger of their militaries. We won’t have to. The Kremlin’s strategy is much more subtle than that, and it is succeeding.

The Russian takeover of Belarus will not be a spectacular event like the 2014 annexation of Crimea, nor will it be a “hybrid” operation like the “little green men” intervention in eastern Ukraine’s Donbas region.

It will also not be a shock-and-awe spectacle like the 2008 invasion of Georgia. Instead, we should be prepared for a slow, stealthy, and methodical operation that will be over before most people even know it is happening. It will be an annexation hiding in plain sight. Think of the old metaphor of a frog in boiling water.

As with most Kremlin operations, there are a lot of moving parts to the Russian takeover of Belarus including economic, military, and political elements, but the direction of the motion is unmistakable.

The recent appointment of veteran diplomat Yevgeny Lukyanov, who has extensive experience in banking and finance as well as an apparent background as a foreign intelligence officer in the Soviet KGB, as Moscow’s new ambassador to Minsk comes as Kremlin-backed oligarchs are seeking to gain control over the crown jewels of the Belarusian economy.

The Russian daily Kommersant reports that Lukyanov, who worked as an executive at Dresdner Bank and VTB, “knows how to count money.” That will certainly be a useful skill at a time when the Russian company Uralkali, owned by the Kremlin-connected oligarch Suleiman Kerimov, is reportedly trying to snap up the giant Belarusian potash producer Belaruskali; and the Russian chemical producer Uralkhem, owned by the Belarusian-born Russian citizen Dmitri Mazepin, is said to be attempting to acquire the major Belarusian fertilizer company Hrodna Azot.

This week also saw moves designed to further integrate the Russian and Belarusian economies. Andrey Lavrischev, the head of the Federal Agency for Maritime and River Transportation, told TASS that Moscow and Minsk are in discussions about building a terminal in the northwestern Russian port of Ust-Luga for the export of Belarusian fertilizer products.

The Belarusian economy is effectively propped up by importing heavily subsidized Russian oil and exporting refined petroleum products along with the export of potash fertilizers. In an effort to maintain a degree of control over his country’s economy, Belarusian strongman Alyaksandr Lukashenka had been resisting Russian demands for years that he export these products via Russia. Instead, he has routed them through ports in Latvia and Lithuania. Lukashenka’s acquiescence now is a signal that Russia is tightening its grip on the Belarusian economy.

Concomitant with the Kremlin’s moves to significantly expand its economic footprint is a clear effort to enlarge and expand its military presence in Belarus. The two countries are currently wrapping up back-to-back exercises that lasted most of the past month. They have scheduled a record number of exercises this year, culminating with the massive Zapad-2021, which is set to take place in September.

Speaking on The Power Vertical Podcast last week, military analyst Michael Kofman, a senior research scientist at the CNA Corporation, noted that the increase in joint exercises appears to be an effort by Moscow to replicate what NATO has been doing with its rotation of forces as part of its Enhanced Forward Presence in Poland and the Baltic States.

“What Russia has been doing for the past year is that through these exercises they can maintain a permanent presence in Belarus de facto,” Kofman said.

“What we are seeing in the last year is not just a difference of degree. We are actually seeing a real qualitative difference in terms of the presence of Russian military forces in Belarus,” Kofman said.

The final and essential moving part in the Kremlin’s strategy is assuring its dominance over Belarusian politics after the current crisis ends. Russia is pressing Lukashenka to amend the Belarusian Constitution to increase the authority of the country’s parliament at the expense of the presidency. Vladimir Putin’s regime is now actively putting the pieces in place to assure Moscow controls the Belarusian legislature through pro-Kremlin parties.

Protestations by senior Russian officials that there are no plans to unify Russia and Belarus are a mirage and a deliberate diversion. An official merger or annexation is not necessary. The Kremlin is achieving its strategic goals in Belarus stealthily, steadily, and methodically. And the strategic implications of this “soft annexation” for the United States and its NATO allies are enormous.